Yesterday morning, at about 7:00 a.m. EST, I woke to the news that Chinua Achebe had died. I read it on the internet. I sat in shock for nine minutes. Nine minutes exactly. I know this because I tend to keep very close watch of time, mornings especially.

After those minutes, I reached for my cell phone and sent text-message notifications of Achebe’s death to my mother and sisters, all several states away. Perhaps they had not yet heard the news, I reasoned, and I was right. Later, while I talked with my mother, she would make a soft wailing sound that I’ve come to associate only with Nigerian women, and lament in Igbo, “Owu otu osi we nwuo?” So this is how he died!

Of course, Achebe was eighty-two years old and ill, and my mother, sisters, and I were well aware of these facts, so there should have been no shock at his death. But it was shocking nevertheless, perhaps because there are those elders among us—sages—who we inadvertently come to view as being outside the wingspan of death.

Following the lamentation, I went about my day as people in mourning are wont to do: I dressed all in black, although quite subconsciously. There was an aura of disbelief and sadness as I walked out the door, as I got into my car, as I drove to the university, and even as I taught my class.

On returning home, I found a request waiting on my computer: an invitation to write a piece—a tribute—to Chinua Achebe.

My first instinct was to decline. I never knew Achebe in the flesh, never had the opportunity to meet the man. I have no family ties to him. Chimamanda Adichie tells of living in a house where the Achebes once lived. I have no such anecdote to share. I am Igbo, yes, the same as he was. And people will notice the similarity in our names. But same tribe and similar names do not a connection make.

What could I possibly have to say about a man I never met?

I sat at my desk to politely decline the request. But somewhere between clicking the reply button and typing the first line of the email, a thought occurred to me: there was never a time in my conscious childhood when I did not know Chinua Achebe’s name.

Indeed, it’s impossible to pinpoint the first time I heard it. His name was something like water, something like air—an ongoing and essential part of my existence, though often taken for granted. It was spoken all around, and followed me like a shadow. And with the name, also the lines, which back then we recited as a song:

Things fall apart and the center cannot hold
Mere anarchy is loosed upon the world.

We sang the words, my siblings and I, not really understanding their meaning and certainly having no clue about their origin in Yeats.

Back then, we watched television dramatizations of Things Fall Apart. We laughed at Okonkwo, then sighed over his death.

Back then, I hadn’t yet read the novel.

Years later, when I did, I re-lived the devastation of the arrival of the colonialists, and I re-lived Okonkwo’s death just as vibrantly as I’d experienced it in those television dramatizations many years earlier.

Last year a story of mine was bought by Conjunctions, the literary magazine at Bard College. As I was unfamiliar with the journal, I decided to browse their website. In doing so, I ran into a recording of Chinua Achebe in which he read a poem. He had written the poem in honor of his friend Christopher Okigbo, an Igbo man killed in the Nigeria-Biafra war. The poem is written in the style of an Igbo traditional dirge:

There was something devastatingly moving about this poem for me. At the time, I attributed the effect to its topic. But this was only part of the cause. The other factor was that never before had I heard literature—aside from the stories my mother used to tell when we were children—spoken in my native language. I listened to the beautiful cadence, the lilt of my mother tongue, and in that moment English ceased to exist. I was thousands of miles away from Nigeria, but in that moment, I was home.

It is important to explain that the poem is essentially a chant sung by young people when a member of their age group dies prematurely. It is a call-and-response sort of recitation. The refrain, nzomalizo, is a combination of the words zo (hide) and mali (a playful sound), which could be loosely translated as “hiding in play.” And so it is that the singers are saying that their friend is merely hiding, not dead, because, of course, they cannot bring themselves to believe he’s actually gone. They sing this song through the night. And in the morning, when they still do not see him, they finally admit that their friend has died.

Reading the news of Achebe yesterday I thought back to this poem. Of course, Achebe was far from my age-mate, and his death was not exactly premature. Still, I could not bring myself to believe that he was dead.

If a new dance is learnt who will dance for us?
When war is declared who will shoot for us?
The dance has stopped suddenly!
Our mask has departed in the heat of the festival!
The rains have drenched the hero!
Who is it that we are calling?
Okigbo is who we are calling.
He’s hiding in play.

Though intended for Christopher Okigbo, these are the lines I now associate with Achebe himself. Great father of African literature. Who fought for our nation when we were too weak or confused to fight for ourselves. Who fought respectably and respectfully, with his words rather than physical might. Chinua Achebe, from whom I drew my inspiration to write. Whose name existed in my mind long before I was aware of its significance. Whose voice made me feel at home again, though I was continents away. A man, despite my never having met him, whose loss I mourn with every fiber of my being.

And so, just as he once called on Christopher Okigbo in memoriam, I call on him now. Chinualumogu Achebe. The rains have drenched you too, but may your name continue to be called upon, now and forevermore. May it remain untarnished. Though you no longer breathe, may you live through the breaths of those who speak your name.

And may you rest in peace. 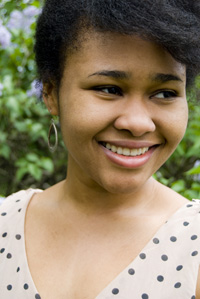 Chinelo Okparanta was born in Port Harcourt, Nigeria, and has stories in or forthcoming from in Granta, The Kenyon Review, The Southern Review, AGNI, The Iowa Review, Conjunctions, Subtropics, and The Coffin Factory. Her collection of short stories entitled Happiness, Like Water is forthcoming from Granta Books in the U.K. and Houghton Mifflin Harcourt in the U.S., and will be followed shortly by her debut novel, tentatively entitled Under the Udala Trees. She has taught creative writing at the University of Iowa, where she was awarded a Dean ‘s Fellowship. In 2012, she served as the Provost’s Visiting Writer in Fiction at the University of Iowa. Also in 2012, she was nominated for the United States Artists Fellowship in Literature. She is currently Olive B. O’Connor Fellow in Fiction at Colgate University. (updated 5/2013)