“What Next?”
By Sven Birkerts

The Feast
By Dilruba Ahmed
Choke
By Dilruba Ahmed
God
By Kaveh Akbar
The Study of Butterflies
By David Barber
Before You Know It
By Robert Bensen
An Afternoon with Doña Amelia
By Mary Buchinger
A Poem Called Baroque
By Ioanna Carlsen
The Quantum Mechanics of Everyday Life
By Philip Fried
After Reading Jim Harrison’s “After Reading Takahashi”
By George Kalamaras
Here at Summer’s End
By Sydney Lea
Bat (in Autumn)
By Cecilia Llompart
Bat (in Winter)
By Cecilia Llompart
Concussion Sequel
By Rosalie Moffett
Elegy for My Brother in the Wilderness
By Matt Morton
From the Lost Letters to Matias Perez, Aeronaut
By Andres Rojas
Blücher, Arendt, a Wildland Fire
By Andres Rojas
Elegy: Letter to My Wife’s Grandfather
By Ralph Sneeden
MARTHA CARRIER HANGED AUGUST 19, 1692
By Cindy Veach
Dear Francis Cabot Lowell
By Cindy Veach
Jetty
By Noah Warren
At 3 a.m. the Night I Heard You Died
By Carolyn Williams-Noren
Parthenon Marbles
By Kathleen Winter 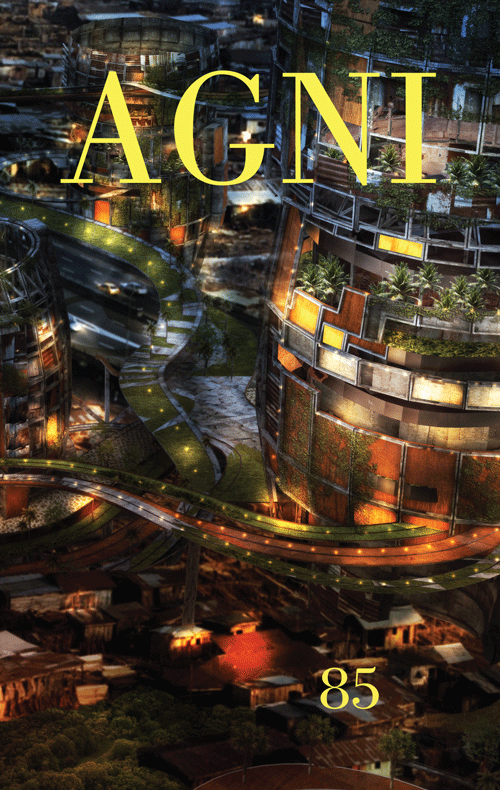 The world as construed, re-construed, and mis-construed. The fantastical meldings of the real and conjectural in the work of artist Olalekan Jeyifous are a vivid visual emblem for the assembled contents of the issue. Our writers, too, run testse”trying variations of the past and reassessing what had been thought obvious. More than once the reader has to ask, Did that just happen? The issue includes stories by Lynne Sharon Schwartz, Evanthia Bromiley, and Marjorie Sandor; essays by Joel Agee, Megan Harlan, and Brandon Kreitler; and poems by Kaveh Akbar, Rosalie Moffett, Noah Warren, and Kathleen Winter. The search for viable new versions of our sensuale”and consensuale”reality proceeds.