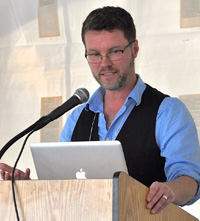 Thomas Wharton’s first novel, Icefields, won the Commonwealth Writer’s Prize for Best First Book, Canada/Caribbean division. His second novel, Salamander, was short-listed for the Governor-General’s Literary Award and the Rogers Writers’ Trust Fiction Prize. A collection of short fiction, The Logogryph, published in 2004, was shortlisted for the IMPAC Dublin Literary Award. Wharton has also written a YA fantasy trilogy, The Perilous Realm, and an eco-fiction, Every Blade of Grass. His work has been published in the US, UK, France, Germany, Italy, Japan, and elsewhere. (updated 6/2016)