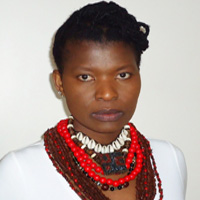 Ret’sepile Makamane was born and raised in Lesotho. She read philosophy and theater at the National University of Lesotho, then moved to Johannesburg where she studied drama and film at the University of Witwatersrand. There she became a commissioning editor for SABC television (The South African Broadcasting Corporation). She went to England in 2008 on a Graça Machel Scholarship, and wrote her dissertation at the University of Leeds on the role of girl-soldiers in the Liberian Civil War. She is a graduate of the Creative Writing MA course at the University of East Anglia and is currently a Charles Pick Writing Fellow there. She is working on a collection of short stories, and also planning her first novel. (updated 5/2011)