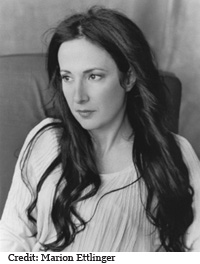 Kathryn Maris was born in New York and moved to London in 1999. She received a BA from Columbia University and an MA in creative writing from Boston University. She has won a Pushcart Prize, an Academy of American Poets award, and fellowships from the Fine Arts Work Center in Provincetown, Yaddo, and other artists’ residencies. Her poetry, essays, interviews, and book reviews regularly appear in British and American periodicals. The Book of Jobs, her first collection, was published by Four Way Books in 2006 and her second collection, God Loves You, will appear with Seren in 2013. (updated 7/2012)