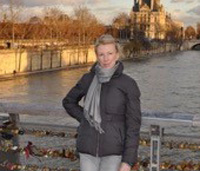 Kai Maristed is the author of the novels Out After Dark (Permanent Press, 1993), finalist for the PEN/Hemingway Award; Fall (Random House, 1996); and Broken Ground (Counterpoint, 2003), a novel of Berlin, as well as the story collection _Belong to Me _(Random House, 1998), which received a starred review in Publishers Weekly. Her stories and essays have appeared most recently or are forthcoming in Southwest Review, The Iowa Review, Epiphany, Michigan Quarterly Review, and Ploughshares. She is also a playwright and translator, with a new translation and adaptation of Frank Wedekind’s Lulu currently in development. (updated 12/2019)