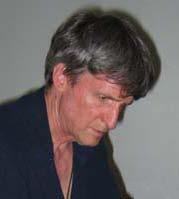 A poet, visual poet, artist, essayist and playwright working in New York and Washington, DC, John Vieira’s full-length collections of poetry include 60 Tomatoes (Bookgirl, 2011), Long Shot (Score Publications, 2005) and Rainfall Data at Ocala (Artemis, 1993). He has given readings of his poems at many different venues-for instance, at festivals on both the East and West Coasts including the annual “Lowell Celebrates Kerouac” festivals in Lowell, Massachusetts, at festivals in the South Pacific, at a “Poets Against the War” Washington, DC Reading for Peace & Justice, in bars in Boston, Cambridge (MA), and Washington, DC, at Adams House at Harvard University, at The Writer’s Center in DC, and at The Poetry Project at St. Mark’s Church in NYC. A lengthy essay, “Ecstatic Writing: An Appeal for the Reclamation of Poetry,” appeared in the magazines The Bitter Oleander (USA) and Bongos of the Lord (Japan) and was nominated for a Pushcart Prize. His art and visual poems have been exhibited at museums and galleries internationally, including Artpool Art Research Center, Budapest, the Pace-McGill Gallery, New York, and “The Golden Jubilee National Festival of Arts and Culture”, Kumasi, Ghana, and can be found in many special collections, including The Sackner Archive of Visual and Concrete Poetry (Miami). John’s artist’s books include Tap Routines Done Barefoot (2012) and If the Garden Does Not Rain (2009) (both Runaway Spoon), and Slow Moving Pictures (Score Publications, 1995). He has also published visual poetry chapbooks, including A Songbird in Igor’s Yard (tel-let, 1995). An entry on his career with a specimen of work appears in A Dictionary of the Avant-Gardes, 2nd ed. (New York, Schirmer Books, 2000). (updated 9/2012)