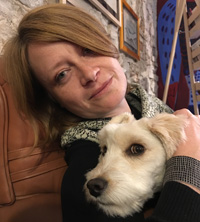 Elisa Biagini, the author of seven poetry collections, most recently Da una crepa (2014), lives in Florence, Italy, after having taught and studied in the U.S. for several years. Her poems have been translated into many languages, and volumes of her work have been published in Spain and the U.S., where in 2014 The Guest in the Wood (Chelsea Editions, 2013) won the Best Translated Book Award given by Three Percent. A translator from the English (of Alicia Ostriker, Sharon Olds, and Lucile Clifton, among others), she has published an anthology of contemporary American poetry entitled Nuovi Poeti Americani (Einaudi, 2006). She teaches art history and writing at NYU-Florence. (updated 10/2016)