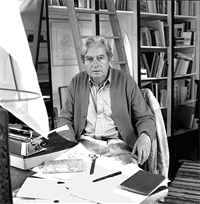 André du Bouchet (1924–2001) is widely acknowledged as one of the greatest French authors of the twentieth century. A groundbreaking poet, he was a prolific translator from English, German, and Russian, as well as a noted critic of art and literature. He published nearly seventy books, including scores of volumes of verse and lyric prose, numerous works on Giacometti and other artists, and translations of Faulkner, Shakespeare, Joyce, Hölderlin, Riding, and Pasternak. In the late sixties he co-founded—with Yves Bonnefoy, Jacques Dupin, and Paul Celan—the influential literary journal L’Éphémère. Among many other honors, he was awarded the National Poetry Prize in 1983.