Bring the lights up on the silhouetted dogs sitting on the cover of George Singleton’s latest collection, Stray Decorum, and surely one of them will be fifty pounds, “white, liver-spotted, gray, and black” with the “coat of a hyena” and “one ear that stood up, and a tail that corkscrewed upwards.”

Of all the dogs that appear in the collection—and there are many—this is Singleton’s perfect dog, the dog that the narrator Bobbobby trades for (yes, trades for) in the story “Humans Being.” The dogs that Singleton’s characters cherish are good ole down home dogs, loyal and trusting, former strays, as mongrel as an AKC toy poodle is pure. A good dog in Singleton’s world rides around the county on the bench seat of a pickup, sitting upright, staring out straight alongside its master.

At times wistful and morose, sometimes farcical and consistently funny, the collection is a meditation on the things both dogs and humans cherish—fealty, freedom, safety, devotion—and the things that deliver their undoing—abandonment, fear, paranoia, gullibility. It’s clear in this collection that Singleton understands dogs, and knows that we can love dogs in ways we can’t love ourselves, while seeking in them those qualities we miss in other people.

We look to dogs to find our reflections, and, as we do with most everything else, to confirm our pre-existing worldviews, a notion that Singleton explores repeatedly. If we see a dog as incorrigible, it may signal our lack of will and imagination. If we believe that dogs can sense good and evil, it presumes a belief in those absolutes. If a dog seems to trust or distrust someone, we are apt to go along. Throughout Stray Decorum, Singleton helps us understand that often it is not our environment or those around us causing our downfalls, but our own inadequate outlook, our own deficiencies.

Conversely, when humans treat other humans poorly, we often do so in the same manner we treat dogs poorly, through abandonment, neglect, and incompetence. Some dogs, like some people, have reasons for their fears; others operate more irrationally. Singleton’s characters take matters into their own hands when it comes to fear: One man builds a moat around his house (and gets his son’s fifth grade class to dig it); another resides with her husband on a houseboat, the proximity to water remedying her fear of spontaneous combustion; another with a penchant for progressive muscle is known to have once roughed up the Secretary of the Interior, the head of the NRA and the director of FEMA. Using absurd extremes, Singleton demonstrates that, if unchecked, our fears and quirks can lead to isolation—deadbolts, divorce, delusion—which breeds more fear and isolation—physical, psychological, ideological, emotional.

Along with Singleton’s understanding of dogs is his understanding of humor, packing it wherever it fits well, which is on almost every page. The best literary humor comes not from jokes or gags, but from within well-crafted characters and their illogical, absurd, and grotesque worldviews. Singleton complies, aptly burdening many of his protagonists with paranoia and irrational fears. Leonard Scott, aka Beaumont, ruminates in “A Man with My Number”:

People don’t like other people with either A) a bunch of names that’re all first names like “Mack” and “Morris” and “Murray,” or B) a bunch of names that’re all last names like “Pinckney” and “Calhoun” and “Sanders.” Dogs don’t like people with those kinds of names, either. Go introduce your dog to someone named Mack Morris Murray or Pinckney Calhoun Sanders and see what happens. Growling dog, that’s what happens.

One character describes a woman’s voice as sounding like “a bovine rib bone scraped across a roller rink’s surface.” Another character recognizes someone he passes at the vet: “I knew the guy. I saw him sometimes talking to himself down at Laurinda’s, or I saw him driving slowly with his face dangerously close to his windshield.”

Of course it wouldn’t be a Singleton collection without a thorough exploration of the South. The collection begins with the story “Vaccination,” which centers on divorced basket-weaver Edward Johnson, who takes his dog, Tapeworm Johnson, to the vet where an encounter in the waiting room prompts the pair on an unexpected ride. Tapeworm is the first recurring character in this collection. We never meet the same dog twice but we come to know each dog as a Southern dog: Simple, unpretentious, mongrel, with sure reflections of the patchwork values of Singleton’s characters (a father with a drinking problem; a mother with a restraining order), their complicated histories (the dogs are formerly stray, the humans formerly married), their hankering for the buzz of whiskey, demons be damned. In one story a curious dog gets lost and is found, while in another a human has a nose for trouble and a longing for redemption.

The stories and characters aren’t linked outright, but they share a common spirit and place. When two or more people come together, there will be alcohol: PBR, Schlitz, Colt 45 or cheap wine. People invite strangers into their homes for beer. Things happen in bars. Singleton will walk us into a beer joint we’ve never been in, yet the bartender is recognizable if we squint, and the regulars eyeing us from around the L give our insides a familiar, unsettling turn.

Aside from dogs, the collection’s overt link is Singleton’s mastery of Southern tension—race, heritage, politics, education—that permeates each story and creeps into each town, every exchange, every negotiation, every breath (and you couldn’t be anywhere but the South with street names like “Old Hard Creek Mill Road”). In “Durkheim Looking Down,” we get privileged information about the insecurities of Southerners from the mouth of Dr. Gerry Core, a former academic who supplies all the stereotypes for the anti-intellectual, college-is-for-snobs wing of the Republican party. Core has become famous in his lectures for being “aloof, spoiled, audacious, haughty, competitive, irrational, short-sighted, stubborn, narcissistic, elitist, inflexible, overbearing, demeaning to both students and colleagues,” and for his specialization in aphorisms that insult locals who attend his lectures. So what do Singleton’s Southerners not want to hear about themselves?

Any citizen who brags about having retained a slave market in the middle of his village “for historical purposes” is like someone who brags about having retained an abscessed tooth. Why is it that anyone who demands a Confederate flag flying in sight for historical reminder never thinks to burn his own house down every day in remembrance of General Sherman? Why is it that all you Baptists down here believe that Jesus hated trees? Quit making those paper religious tracts and handing them out.

Ultimately, Singleton seeks an earned redemption for his characters and for his Christ-haunted, comical South. In the final scene of the collection’s final story, we come to Singleton’s perfect dog, the one Bobbobby trades for, promptly changing her name from Blanche to Tennessee. He says to its former owner, “I’ll take better care of this dog than you will. I’ll take care of this dog better than anyone, is what I’m saying,” knowing that when we save a dog, we save ourselves.

David Holub is editor of Kugelmass: A Journal of Literary Humor and teaches writing at the University of Hartford. His work has appeared in McSweeney’s, The Christian Science Monitor, American Book Review, PANK, Hobart, and elsewhere (4/2013) 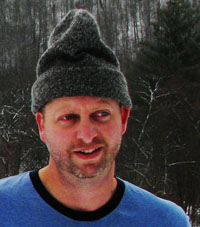 David Holub is editor of Kugelmass: A Journal of Literary Humor and teaches writing at the University of Hartford. His work has appeared in McSweeney’s, AGNI, The Christian Science Monitor, American Book Review, PANK, Hobart, and elsewhere. (updated 4/2013)