In The Return of the Native, Thomas Hardy foresees a time when people will turn away from landscapes “renowned for beauty of the accepted kind” in favor of more modest prospects. “Indeed,” he writes, “it is a question if the exclusive reign of this orthodox beauty is not approaching its last quarter.”

If the need for such a redefinition seemed imminent in 19th-century England, it is incumbent in 21st-century Australia, where the countryside never conformed to English standards of beauty in the first place and has now been ravaged by decades of despoliation.

John Kinsella, an Australian poet whose self-assigned task is the development of an “anti-pastoral” tradition, takes Hardy’s line as the epigraph to his ars poetica, “An Aerial View of Wheatlands in Mid-Autumn.” It concludes:

That call for order in the rural scene,
For Virgil’s countryside satiated
With weighty corn and Campanian wine, [. . .]

Is not the harmony of this decade.
Instead look to the flux of soil and fire, [. . .]
The frantic dash of the land-bound plover,
The breaking of salt by errant samphire, [. . .]
The everlasting in bright disorder,
The stealthy path of the predating plane
Cutting boundaries as you sow your grain.

This beauty is defiantly unorthodox. Everything that would lend serenity to a Virgilian pastoral poem—the animals, the vegetation—here contributes to a sense of uneasiness: a bird dashes frantically because it can’t fly; a shrub emerges through salt that has come to the surface because of a rising water table, itself the result of deforestation. The “bright disorder” of the flowers flouts “that call for order in the rural scene,” just as Kinsella’s decasyllabic lines disappoint the expectation of a pure pentameter.

Many readers—particularly Americans encountering Kinsella for the first time in Peripheral Light: Selected and New Poems—will have to unshelve their OED’s in order to keep up with him, but they’ll be glad they did. Kinsella is a keen student of the physical word as well as the physical world, and he’s constantly smuggling secondary and potential meanings into poems. “Everlasting,” a flower so named because it retains color after it has dried, is a good example. So is “predating,” an obscure participle back-formed from the noun “predator” (the plane is taking unauthorized photographs—the “aerial view” of the poem’s title). It’s difficult to see either word on the page and not call up its more common definition—“lasting forever,” “coming before”—just as it’s difficult, in a poem with a rural setting, to pass over the word “plane” without hearing its homophone. These aren’t idle ambiguities. They may in fact be the essence of the anti-pastoral: an immitigable tension between the recent and the ancient, the predating plane and the pre-dating plain.

Kinsella is probably the most prolific poet now writing in English. Born in 1963, he has already published more than 20 collections in the U.K. and Australia, along with two volumes of fiction, a quartet of short plays, and an autobiography. “I tend not to do things by halves,” he’s quoted as saying in a book of critical essays on his work, Fairly Obsessive. Indeed. Although Kinsella’s sense of what constitutes completion may not be everyone’s: he sleeps about three hours a night.

This could be the biorhythm required of a poet with Kinsella’s personal history and ambition. Australia has had only two centuries to assemble its literary identity, and rather unwieldy tools to work with: its dubious origin as a prison colony, a language that belongs to another country, and a landscape that could belong to another planet. According to the poet Judith Wright, non-Aboriginal Australians have always seen their surroundings as “the outer equivalent of an inner reality; first, and persistently, the reality of exile; second,…the reality of newness and freedom.”

But Kinsella was given a blank slate even by Australian standards. Born into a family of farm managers and sheep-shearers in the remote western Wheatlands, he grew up feeling doubly exiled—down under and outback. He craved intellectual company and eventually found it in literature and literary friendships, maintaining letter correspondences, at one point, with 200 writers from around the world and seeking out every sort of poetic influence. Asked in a recent interview to name some of his early models, Kinsella rattled off a list of poets no one would dare invite to the same party: Wordsworth, Rimbaud, Hardy, Frost, Gertrude Stein, Jeremy Prynne, John Tranter, and the L=A=N=G=U=A=G=E poets, among others.

They’re all present, to varying degrees, in Peripheral Light. Kinsella has no more interest in orthodoxies of style than in orthodox beauty. There are traditional forms such as the sonnet, villanelle, and terza rima, extravagant syllabics in the spirit Marianne Moore, plainspoken, linear narratives, and poems that throw syntax to the wind: “Corrugations, Boolean, / iron and galvanising, bedevilled in sutures / as down cycle, or business in speech, as if licenses / or feathers, good eating a deployable, a summons / or magnetic.”

Kinsella’s abundance makes the periodic publication of a selected volume necessary, but his variety makes it almost impossible to do right: a more coherent book won’t be properly representative; a more representative book won’t cohere. Harold Bloom, who selected the poems for Peripheral Light, opted for representation with an emphasis on recent work. It’s a defensible choice, offering new readers a sense of Kinsella’s range and bringing a good deal of previously uncollected poetry into print.

But the inclusion of so many newer poems (which Bloom favors for reasons his rambling introduction fails to elucidate) throws emphasis on Kinsella’s least interesting tendencies. The second half of the book frequently reads like notes toward the first half—less lyrical, more self-reflexive, more tediously paratactic, less carefully written:

That at high speed this rise
moving away from town can so much
epitomise the age; the limit
reached just before the crest,
narrowing down to a bottleneck,
a noose of gravel shouldering
the long thin black neck, [. . .]

These are the hazards of composing at high speed: the momentary awkwardness of “moving away from town,” which stops the car while the reader searches for a referent; the not-especially nooselike “noose of gravel”; the indolence of those last adjectives; the repetition of “neck.”

It’s tempting to suggest that Kinsella, a poet of extraordinary gifts and resources, has simply been writing too much—that he ought to devote the same time and energy to his next 20 poems that he spent on his last 200. But it’s hard to imagine him flourishing under that sort of restriction. And it’s hard to second-guess the process that yielded this book’s best poems: “Black Suns,” “Anathalamion,” “The Hunt.” An occasional “Aerial View of Wheatlands . . .” is worth almost any amount of chaff.

Eric McHenry has written about poetry for Slate, The New York Times Book Review, and Parnassus. His own poems appear in Northwest Review, The New Republic, Dogwood, LitRag, and issues 50 and 56 of AGNI. (8/04) 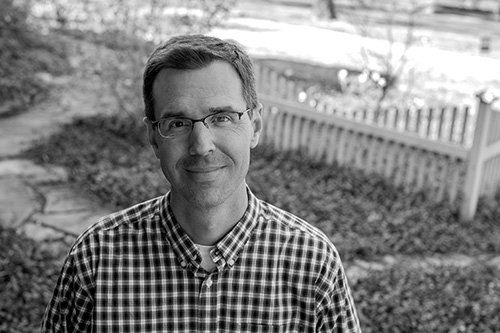 Eric McHenry’s most recent collection is Odd Evening, a finalist for the 2018 Poets’ Prize. His poems have appeared in Northwest Review, The New Republic, AGNI, Dogwood, LitRag, and elsewhere, and he has written about poetry for Slate, AGNI, The New York Times Book Review, and Parnassus. Poet laureate of Kansas from 2015 to 2017, he lives in Lawrence and teaches English at Washburn University. (updated 10/2018)