Almost one hundred years ago, Arshile Gorky sat down in his New York City studio to paint a moment from childhood. In the resulting image, based on a photograph taken of the artist and his mother before they fled the Armenian Highlands, both figures stand side-by-side and gaze beyond the viewer. Although their sleeves touch in the original photograph, in Gorky’s portrait a river of space undulates between them.

A similar hourglass of air forms the focal point of Swan Song, Armen Davoudian’s stunning debut, which won the Frost Place Chapbook Competition in 2020. Gorky’s intimate expanse flows down the center of the chapbook’s cover, and its analog shapes the collection’s structural and metaphysical core. Opening to the table of contents, you notice Swan Song’s mirror-like architecture: eight poems make up the first half, and another eight the second. Bookending the collection are two sonnets, “Black Garlic” and “Swan Boats,” which reflect on the ways memory scatters and refracts. Swan Song’s title poem hovers at the middle and branches into two distinct compositions that face each other across pages: a twentieth-century ghazal by Mehdi Hamidi Shirazi (printed in Persian) and Davoudian’s incantatory English translation. Like the slender space at the heart of Gorky’s painting, the dividing line between these poems simultaneously joins and separates perspectives.

From beginning to end, Swan Song revels in the tension between union and departure. Its poems are peripatetic. They pass sinuously into and out of recollection, tending to linger in what the speaker of “Coming Out of the Shower” terms the “other world” of preadolescence and young adulthood. Almost always laced with yearning, Swan Song’s travels elicit something more complicated than nostalgia. Its poems limn the distance between loved ones and conjure the child’s incommunicable reality with striking immediacy. “In a one-bath four-person household, we / learned what we mustn’t see,” explains the speaker of “Coming Out,” a poem that depicts a scene Gorky could have painted. In a washroom stand a mother and son, one applying concealer at the mirror and the other keeping his eyes “shut . . . under the scalding stream”:

so coolly intimate
with one another’s silhouette
behind the opaque frosted shower screen
_               _ that once more stands between
us two.

For all that remains unspoken and unseen in this poem, the innuendo in its title, reiterated in the sixth stanza, insists on a double reading. “I’m coming out,” the son warns his mother after he finishes “scrubbing off last night’s dream,” according her the space to “look away” and “forgive the spillage, or forget.”

Graduate students at the kind of “elite institution” where the speaker of “Persian Poetry” warily locates himself might feel inclined to frame “Coming Out” in terms of the queer, the diasporic, the subaltern. Yet Davoudian distances himself from the jargon of academe through satire in “Persian Poetry,” itself written in English but freighted with pantomimed neologisms—“positionality”; “other-ness”—that beg their own translation. “My colleagues,” the poem begins, “study poverty, whiteness, / the impossibility / of language to signify.” For all their ostensible focus on “the moral imperative of art,” however, the speaker’s contemporaries bury the feeling that prompts their very studies. “I believe in nothing more than in love,” he confesses, exposing the ivory tower’s hypocrisy in arch but affecting defiance.

Sometimes Swan Song evokes specific moments that bring the past closer. “You took / one socked foot out of a loafer / and held it in your hand,” recalls the speaker of “Alibi,” revisiting an occasion when he and a lover “sat together in the country / where men like us can sit together / like this.” “Rubaiyat” likewise melds its tenses so that past and present align and overlap: “Another day we’re locked inside as rain / needles the surface of the sea again. . . . It was too late.” Are these fragments shored against remembered or imagined histories? Given that both realms are equally potent in this collection, perhaps drawing distinctions is beside the point. Frequently, whole poems in Swan Song feel allegorical (“Time out of mind, this was our turquoise blue / mind out of time, watching white thoughts come, go / across a mirror” in “Swan Boats”), with settings shaped as much by the literary landscapes in which the poet’s personae grew up as they are informed by distinct geographical locations. (Eliot, Frost, Stevens, and Merrill are just a few of the anglophone notes that echo in my monolingual ear.) More often than not, Swan Song adopts several modes at once, which makes for a reading experience as immersive as it is intellectual. To unite the cerebral and the sensuous as movingly as Davoudian does without withdrawing into solipsism is one of his collection’s most powerful feats.

Despite its backward glances and intricate structural symmetry, Swan Song does not strive for pure restoration. Few of its poems end in the full-circle return of perfect rhyme, and Davoudian’s finely controlled meter merely emphasizes his preference for slant. Habitually romantic, the consciousness that unites the poems is too philosophically knowing to indulge in attempts to recover lost time. Instead, Davoudian plumbs retrospection’s parallax. “I found a strand of silver hair today / snagged on the label of a jar, a gray / entangled cursive of another language,” speaks the voice of the chapbook’s first sonnet. Inside this jar soaks garlic that was pickled years before by a grandmother, garlic whose “broken heads soften and age in verjuice” and grow sweet with “molasses, / black with sulfuration, new with loss.” It is tempting to read “Black Garlic” as an ars poetica, since the entire chapbook attests to the impossibility of unalloyed preservation. “Nothing is the same,” declares the penultimate line in Davoudian’s last poem, for the mind’s mirror “itself [is] change.” But his haunting compositions also make clear that loss forms only one ingredient of their language.

Take “The Yellow Swan,” a tour-de-force of Ovidian metamorphosis and a testament to how generative impermanence can be:

At noon the pedaled swans afloat midstream
or parked at the water’s rim
find the boy first in line or there before
there is a line[. . . .]
_He whispers, I love the yellow swan,

A secret he knows better than to share
save in the hollow ear-
like curve of that arched neck whose mirror image
breaks on rings of water as he climbs
between the wings and pedals from the pier,
a trail of molted plumage
_shuddering in its wake. The river foams,

Churned by the paddlewheel and changed to ocean,
its surface cut by the question
mark of the swan—no, dragon—gliding on
the hissing bloodstained waters as he turns
fire on darkness . . .

This poem is steeped in conversation with Merrill’s “The Black Swan,” in which the turning of a swan’s “neck / Transform[s], in time, time’s damage; / To less than a black plume, time’s grief” (James Merrill: Selected Poems, ed. J. D. McClatchy and Stephen Yenser). Davoudian’s response recognizes time’s grief: “The Yellow Swan” ends when the “stroke of one o’clock returns the beast to boat, the boat to boatman,” and the boy, bereft, is left to hate what is taken from him. Yet while Merrill transmutes time’s damage to “less than a black plume,” in Davoudian’s poem transformation acts like a phoenix that turns “fire on darkness.” Even the molted plumage the yellow swan sheds in its wake “shudders” with the vitality of some terrible beauty that, to quote Yeats’s “Easter, 1916,” “changes minute by minute” (W. B. Yeats: The Major Works, ed. Edward Larrissy). Indeed, the very “break” that cuts off the boy’s ride sustains its brilliant transfiguration from boat to “swan—no, dragon—gliding on” a river that expands into the ocean of the child’s churning imagination. Animating Davoudian’s dashes is a Bishop-like recognition of the inevitable adjustments and revisions that perception makes as it mediates the world. But in the space between the sphere of the eye and the globe that surrounds it, this poet finds continuity. For Davoudian, the divide between an event and the impression it leaves is not some tragic falling away or cause for elegy. What first appears as a “no” distinguishing the swan from the dragon develops into the “on” and “on” and “on” of the stirring assonance that extends through the poem’s last lines, a phantasmagoria as ceaseless as the waves bobbing a boat and “brea[king]” water into “rings.” These breaks in reflection are what drive Swan Song’s liquid pulse and convey such deep feeling. 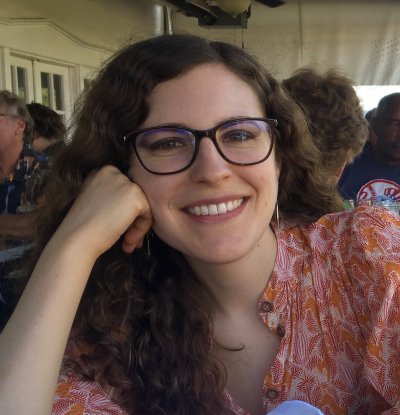 Zoë Pollak’s writing has appeared in Women’s Studies and is forthcoming in 2021 in The Hopkins Review, Now Comes Good Sailing: Writers Reflect on Henry David Thoreau (Princeton), and Sonnets from the American: An Anthology of Poems and Essays (Iowa). She was born in San Francisco and is currently a PhD candidate in English and Comparative Literature at Columbia University. (updated 4/2021)