The first poem in Natalie Shapero’s Popular Longing begins with a recollection of when “the big museum”—that is, the Museum of Fine Arts in Boston—bought a Gustave Caillebotte painting. In it, a man towels himself off after a bath, exposing his pale buttocks and bare legs. Shapero doesn’t describe the painting, though. In one of Shapero’s characteristically weird associations, the speaker instead imagines what the nineteenth-century painter was thinking when he painted it; she is “almost certain” that he thought of

some twenty-first-century bitch in Boston
catching a glimpse of a framed reproduction,
recollecting a study about how washing oneself may induce
a sense of culpability. What I remember

is he insisted I clean before leaving.

The first three and a half lines here are impersonal: the speaker thinks of being seen as a contemporary museum visitor for whom the painting prompts an academic reflection, a memory of a recent psychological study. But what comes next—split by the poem’s one gap of white space—recalls a moment of not only intimacy but an unsavory possessiveness.

In the poem’s remaining lines, the speaker recalls other memories of the unnamed man, who “took my jaw in his hand / and said IN THE NEXT LIFE, WE’LL REALLY BE TOGETHER” in tones that “made me almost / certain he knew something I did not.” Accordingly,

Now I eat right,
train hard, get my shots. This life—I’m angling
to remain in this life as long as I can, being almost
certain, as I am, what’s after—

The poem breaks off with that dash, and with the notion of spending at least a lifetime—and possibly an eternity—with the man whose romantic promise lands as a threat. As with almost every poem in this deeply unnerving, deeply funny-in-both-senses collection, I find myself asking: how did we end up here? What sequence of thought led Shapero from Man at His Bath to avoiding death “as long as I can”? One explanation is mimetic: as in actual life, the not-fully-described memory needs no excuse to return and take over. But that doesn’t quite get at the full oddity of the work—say, the way that little phrase “almost certain” repeats three times in this short poem, always about something far from certain.

“Man at His Bath,” like Popular Longing as a whole, addresses subjects familiar from Shapero’s previous collections, No Object (Saturnalia Books, 2013) and Hard Child (Copper Canyon Press, 2017): memory, both its general nature and particular unwanted memories; men, often the source of those memories; the body; and customs of the contemporary United States as seen from an estranged perspective. The world of these poems is frequently a terrible one, where the noise of airports (the “yowl / of the Airbus, the Boeing’s // Gregorian roar”) is an advantage because it conceals the sounds of an “inexcusably human // night”: bottles smashing against cars, brawls, “strange chanting,” drinking games. Death waits, rarely out of frame—more often, it is just out of focus.

Two subjects, though, are given new emphasis here: art and money. They indicate Shapero’s even more intent concentration on what humans value and disregard and bring about. In Popular Longing, Shapero writes about paintings and sculpture, museums and their entry fees, movie tropes, orchestras. And she tends to give equal prominence to our other productions: waste, wars, and abuse on multiple scales. For every reference to “Rembrandt’s only seascape” there’s one to a landfill, or a filthy river, or “small / talk about all the bodies and trash on Mount Everest.” An imagined future features “A bread / for sharing, braided with strips // of garbage”—a sentence that begins by mimicking the warm, affirmative blurb of an online recipe before transforming, at the line break, into an emblem for what we’ll bake during “the emptiness ahead.”

Given my descriptions so far, Popular Longing would seem to promise seventy pages of bleakness. But Shapero’s new collection is energetic, wistful, and comic to its core. As demonstrated by the post-apocalyptic vision of bread entwined with refuse, Shapero’s approach is utterly unexpected and lively. Notice the way her enjambment forces a millisecond’s pause before the surprise of “of garbage”: it is mischievous, but not effortfully or ostentatiously or self-consciously so. Rather, the comedy lands as the consequence of a serious impulse, delivered by rapid and unpredictable sentences:

The symphony’s out of funding again, and no
wonder: all those violins, the twisted strands
and sponges—who could not think
of torture?

With the speaker’s certainty that the “twisted strands” of nylon and metal (let alone the actual screws and pegs that tighten them) necessarily make everyone think of racks, the poem’s train of thought turns in a way that trains normally don’t. The question is not so much glib or cynical as it is freshly strange, in part because it isn’t lingered on; it is just one remark in an extremely quick-moving series. No sooner does it appear than it recedes: each short, matter-of-fact assertion carries us through different—but similarly arresting, disquieting—territory.

Such moments of logical and affective slippage drive Shapero’s poems. Tracing these gaps, both within sentences and between them, is one of the intense pleasures of Popular Longing: as you come to figure out the gaps, you begin to discover the depths of feeling beneath them. Shapero extends the logic of a cliché past its end point or derails a popular belief; the result is a little like an objective correlative for hitherto-overlooked anxieties, preoccupations, and perceptions. The claim that animals can sense earthquakes, taken literally, leads to a set of instructions in which you “scan the classifieds, / searching for a sudden spike / in the number of missing pets,” and then shelter in place—or, better yet, flee California entirely—to protect yourself from imminent disaster.

At times, the remote, defamiliarized perspective of Popular Longing suggests a Martian writing a postcard home; at other times, these poems’ speakers are all too familiar with this Earth. In one caustic poem, “They Said It Couldn’t Be Done,” the speaker positions herself as part of the American we that passively funds invasions:

So sorry about the war—we just kind of
wanted to learn how to swear
in another language, and everyone knows

the top method is simply to open
fire and listen to what people yell.

The contemporary United States, in the lines that follow, becomes a hellscape. First God appears, “with His hand // crank, lowering the sky to make more room / for Himself”—an image that suggests both further aggression and anthropogenic changes to the atmosphere. Then there is “the high-rise // we build to brace back, this series of holes / for bathing and mending and parboiling // roots and undecorated fucking in the style / of the times.” The slightly extraterrestrial vantage of Shapero’s writing is evident in “this series of holes”: these are people’s apartments, warrens of vulgarity, hostility, and austerity. The high-rise is a microcosm for the speaker’s world, which offers reminders of its menace at every turn.

The sense that the speakers of these poems are permanently off-kilter—at odds with their culture and surroundings—is reinforced by Shapero’s language: alternately slangy and formal, often crisp and periphrastic. Not “the MFA” but “the big museum.” A woman doesn’t use a blanket “for picnics,” she places a blanket “between her children and the dirt / before they all sat down to a meal outside”—as if certain words have been struck from the speaker’s mental dictionary.

The relations between the world that the speaker is stuck in and the poems that describe it are examined in “Don’t Spend It All In One Place,” a sequence of fourteen unrhymed sonnets (a new venture for Shapero). The sequence sounds somewhat like a museum lecture, opening with the observation that:

The whole thing about museums is they don’t
let you have a pen; it is formally prohibited to write
with a pen while proximate to the collection.

Half visitor, half docent, the speaker folds a colloquial generalization—“The whole thing about”—into the comically stilted restatement that follows: a sonnet sequence that begins with the idea of being deprived of a metonym for poetry.

Though the speaker “mock[s]” the pen ban, she explains that she does so because mockery “helps me forget / about all the times it has of course happened,” and the last four lines elaborate on “it”:

acid splatter across the Dutch nude, hammer to the arm
of the PIETÀ. Or the pipe bomb placed beside
the high relief. Or the man who drew his gun
and shot up a wall of old masters and then himself.

The first two of these, references to actual incidents involving Rembrandt’s Danaë and Michelangelo’s Pietà, center on representations of women—and so to the thread of domestic violence that runs through Shapero’s work. The latter two suggest violence toward civilian crowds: a pipe bomb detonated near a group of sculpted figures, a gunman and the “old masters.” The destruction of pictures is thus bound to actual death; that last line’s zeugma makes the link literal.

As becomes evident across the sequence, the speaker is intensely disturbed by defaced art. Though she is not explicit about why, the connection made above—between what humans make and destroy—keeps returning. In the next sonnet, which explains why a painting vandalized once is likely to be vandalized again, the speaker finds an analogy in the story of a place where people go to kill themselves in increasing numbers, until “the agency that governed the ferry system / declared it a crime to purchase a one-way ticket”—lines whose factoid-esque style cuts against their grim import.

The sonnets roam over art, violence, institutional funding, and the unsavoriness of people. True to Shapero’s initial mention of a pen, the sequence is also self-reflexive. Its final sonnet begins by noting a conundrum that could be applied to the book:

Ultimately, it’s a mystery why anyone would choose
to visit a museum, to accumulate more and more
images they’ll only end up begging to forget.

Popular Longing articulates the appeal of damage—how one is compelled to keep looking even when one doesn’t want to, even when one wants to forget or ignore. It transforms that damage as well. Take what Shapero accomplishes in the last lines of the sequence, after the speaker envisions a glass-guarded painting being besieged again and again:

And the painting just hanging there afterward,
surrounded by smashed fruit and splintered
pottery, like some disfavored leader—I can’t not
see it. I can’t not think of the queue in the marbled
entry hall, the counter, the request for a one-way
ticket to the gallery. That’ll be ten bucks.

Shapero’s first two books were full of one-liners; Popular Longing’s wit is quieter. But the last sentence in the collection, an overt punchline, startles. It unites the one-way ferry tickets and the $20 museum fee and by extension all of the poems about money (even “Man at His Bath,” which begins by noting that the MFA sold eight other paintings to purchase Man at His Bath). If the voice in this book calls to mind a magician’s patter, this ending is prestidigitation. You enter the rooms of the museum as you exit the rooms of the sonnets; you are greeted and sent off by a spondee that is rueful, clever, and asks for payment. 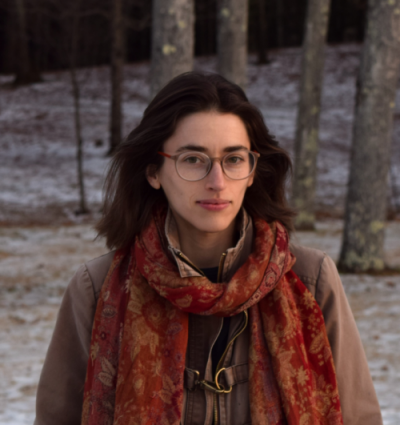 Calista McRae is the author of Lyric as Comedy: The Poetics of Abjection in Postwar America (Cornell University Press, 2020). She is assistant professor in Humanities at the New Jersey Institute of Technology. (updated 3/2021)