Antiquing in the Berkshires, I discovered my desk. The woman who sold it to me—a young widow—had packed it away in the corn loft over the carriage house when her husband died over a decade ago. Upon dragging it out to day light, we found it covered with the marks of fowls—quite white with them. Slide back the roll top, open the drawers, stick your hand in the pigeon holes…you’ll still find eggs. The manuscript on the floor is of my latest project—a rewriting, word for word, of Moby-Dick. Each stack contains fifty pages and I’m up to almost ten stacks. My office was once the kitchen table, but is now in the garret-way, and I find it odd to not see myself seated at the little embrasure of a window, which commands so noble a view of the boy-racers as they wrap their cars around the bends, only occasionally crashing into lamplight. The ground, all slick with rain as it is, gives me a sort of sea-feeling in the city. Most books, I should say, are shelved downstairs, but one on my desk stands out, my own The Writings of Herman Melville: Correspondence Volume 14 (in which I dutifully reproduce Melville’s letters sent and received); it provides me with many of the facts I’m rehearsing here. On the wall there hang some impediments: a harpoon, a crucifix, maps of the South Pacific and North Dakota (where I once enjoyed a skiing holiday). On the mantle above the fire, there is an Oriental looking box containing cigars; the Antilles smell of which reminds me that the day is almost always over. The clock, however, that hangs above the fire does not tick or chime. It shows 4:30 Greenwich Mean Time, and never changes, perpetually giving me half an hour more till I must rise from my desk to join my wife and boy for dinner. Two last things which are undetectable in the photograph: the first time I stepped into an antique store was my last. And the eggs, as I discovered at breakfast earlier today, remain fresh. 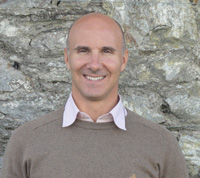