The window of her last room,
in the subacute ward, building
next door to death, was lovely in
the evenings, after visitors
had come and gone, after Dad
had taken Brad back to the farm
and made his last stop in, and
all the machines and tile faded
as snow outside grew violet, then
white against the dark, a steady
glow beneath us. I could leave
the curtains apart while she slept
more heavily with the bigger night
dose of morphine, and I gave up
reading my Chekhov story.

After the first days she hardly
opened her eyes, and the sky
had clouded over, so I left it there
all the time, that square of world
we seemed to have known before,
though we’d never been there.
Now I picture snow, stark, definite
against the trees, then realize, no:
it was just September; even in
South Dakota an early snow
wouldn’t stay on the ground
that long. Maybe there wasn’t
any snow, only the pale light,
and her window altering
the way light passed through it. 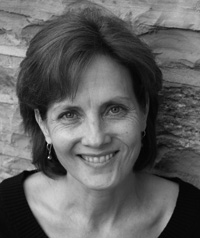 Debra Nystrom is the author of four poetry collections: A Quarter Turn, Torn Sky, Bad River Road, and Night Sky Frequencies. Her poetry, fiction, and nonfiction have appeared in Conjunctions, AGNI, Kenyon Review, The New Yorker, Slate, The Best American Poetry, and elsewhere. She teaches in the MFA Program at the University of Virginia. (updated 4/2020)