Lit from Inside: 40 Years of Poetry from Alice James Books tells the story not only of a cooperative press that has endured and thrived, but also of the important changes wrought in American literature and culture since 1973, when seven Boston-area poets founded Alice James Books. Anthology editors Anne Marie Macari and Carey Salerno have selected poems from every title published by the press through 2012, creating a thick, diverse chronology of voices that speak from a range of identities and cultural moments (notable authors anthologized include Jane Kenyon, Jean Valentine, Timothy Liu, Richard McCann, Laura Kasischke, and Reginald Dwayne Betts). Because the press’s fledgling years corresponded with the height of second-wave feminism, the aftermath of the Civil Rights and anti-Vietnam War movements, and the burgeoning of independent publishing (AGNI was founded the year before, in New Jersey), readers can track the shifts inaugurated by that period of foment throughout the anthology.

Readers interested in a close examination of the press’s founding years will appreciate the scrapbook-style material included in the anthology’s center section, “From the Archives of Alice James Books.” Bookended by more than a hundred poems on either side, this thirty-page collection of photographs, handwritten notes from authors, and other ephemera provides a look at the collectivity that birthed and has sustained the press. For example, an image of founding member Marjorie Fletcher carefully setting type for the press’s first books (she leans over a light board, cutting and pasting) reveals the scope of cooperative membership. Likewise, a 1981 note from the Cooperative to Miriam Goodman accepting her manuscript brims with shared joy: “You weren’t at home at 3:30 to hear the news from all of us in concert that we love the manuscript and the answer is YES. . . . Just call anyone of us seven who were the manuscript committee and we can talk about it.” The anthology’s archival material also points to the press’s feminist origins. Consider its name: the founders chose to honor Alice James, a skilled writer unpublished in her lifetime, overshadowed by brothers William and Henry. (Readers may ask, “But did and does the press publish men?” Yes. “The new press was feminist but didn’t exclude men,” Macari writes in her introduction, “as is obvious by the fact that two of the founders were men.”)

Both the women’s movement and the small-press movement sought to make space for underrepresented voices, and Alice James Books has remained dedicated to such seeking. Indeed, the progression of poems included in Lit from Inside attests to the growth of that dedication, and the anthology stands as an engaging document of the expanding conversation about inclusion’s parameters that began in the 1960s (in the literary world as well as in many other sectors). The first quarter of the anthology, though it reflects second-wave feminism’s well-documented blind spots (white, straight, middle class voices dominated the movement early on), also reminds readers of the dearth of any women’s voices before the 1960s. Many of the poems representative of the press’s first two decades reflect the need to speak, the bravery, and the breaking of silences that defined those years:

I am out in this weather
to recover my faith, to find
a survivor, or a reason
to dance.

These lines, from Robin Becker’s “Four Days of Rain,” could serve as a parable for the risks underrepresented people take in order to speak. The speaker submits herself to the elements in order to celebrate and survive. Similarly, Becker’s contemporary Jeannine Dobbs, who co-published Three Some Poems with Kinereth Gensler and Elizabeth Knies in 1976, describes a memory of mushroom-hunting with her mother in terms of inside/outside, enclosure, and openness:

In Marjorie Fletcher’s “Permission, Berkeley,” quoted below in its entirety, the speaker directly addresses women’s exclusion from literary and academic strongholds:

I enter behind
the woman who will lecture
and the department chairman.

She smiles.
But in angry tornadoes I spin.
She writes their names on the blackboard.

Fletcher echoed her speaker’s concerns in a 1983 essay for The Massachusetts Review. In the essay, included in the anthology’s archival section, Fletcher reflects on the press’s first decade and the literary climate that necessitated its founding: “commercial publishers simply are not irrevocably committed to women’s work.” Some readers may categorize Fletcher’s concerns as outdated. However, as data compiled each year since 2009 by VIDA Women in Literary Arts demonstrates, Fletcher’s three-decades-old observation still applies to much of contemporary publishing (readers will find more information at www.vidaweb.org).

Alice James Books has remained committed to women writers, and Lit from Inside includes a refreshing range of poems that explore women’s sexuality, motherhood, and reproductive issues. Notably, such poems appear alongside those that engage questions about God, war, difference, death, love, and illness. Thus, the anthology validates women’s experiences as human experience. In Fanny Howe’s “The Nursery,” readers meet a speaker who describes domestic space as connected to public images and issues:

A plane above the patio

wakes the silence
and my infant who raises

his arms to see
what he’s made of.

When it was over
I awoke in a large room
There were flowers
My body was empty
my arms black and blue
from elbows to biceps
See the doctor said _you don’t remember . . _.

Here, Zuckerman writes “about” childbirth, but also about power, the authority of institutions, and silence. Similarly, Nicole Cooley’s “Cesarean” shows equal concern, thematically, for difference as it does for childbirth:

I once wished to take myself apart

There is no space between us   body caught in my body

Gracefully, Lit from Inside suggests that the positions from which poets speak inform their work but do not comprise the totality of their concerns or prohibit them from engaging other territories.

As the anthology’s more than 300 pages spool out, readers can follow thematic strands—childbirth and motherhood, for example—but those strands come from a thick braid. In the anthology’s second half, Brian Turner’s “The Hurt Locker” takes on the task of describing war:

Believe it when you see it.
Believe it when a twelve-year-old
rolls a grenade into the room.
Or when a sniper punches a hole
deep in someone’s skull.

And Shara McCallum’s “Psalm for Kingston” praises a complicated city and its people, both dear to and distant from the poem’s speaker:

City of market women at Half-Way-Tree with baskets
atop their heads or planted in front of their laps, squatting or standing
with arms akimbo, susuing with one another, clucking
their tongues, calling in voices of pure sugar, come dou-dou: see
the pretty bag I have for you, then kissing their teeth when you saunter off.

The anthology also reflects changing literary styles. Although Alice James has no stylistic affiliations, it has clearly made space for the experimental. “I follow a stray dog/ so he’ll stop following me/ and a violin begins forming/ in the pocket of my coat,” writes Idra Novey in “Aubade for Viña del Mar.”

In spite of the anthology’s title, many of the voices collected here speak, in fact, from outside the milieu of commonly represented experience. And yet, the title suggests that we reevaluate where we mark the “inside” and “outside” of social, political, and literary import. It also suggests that poetry has the power to shed light on off-the-record, interior aspects of experience. Poets can translate the confidential (or the culturally marginal), encourage readers to get “in the know.” And what might we come to know? Take it from Jean Valentine, as expressed in the title poem from The River at Wolf, published by Alice James Books in 1992:

This close to God this close to you:
walking into the river at Wolf with
the animals. The snake’s
green skin, lit from inside. Our second life. 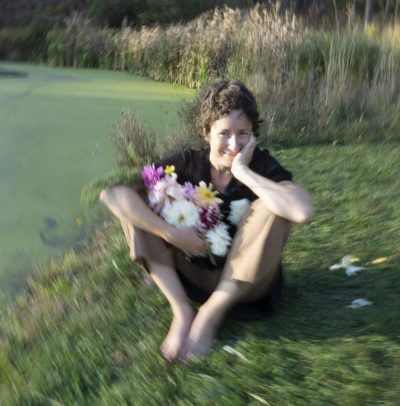 Abby Minor is the author of the chapbooks Real Words for Inside (Gap Riot Press) and Plant Light, Dress Light (dancing girl press). She lives in the ridges and valleys of central Pennsylvania, where she works on poems, essays, gardens, quilts, and projects for reproductive justice. The granddaughter of Appalachian tinkerers and Yiddish-speaking New Yorkers, Minor teaches poetry in her region’s low-income nursing homes. See more at abbyminor.blogspot.com/. (updated 9/2021)