I have washed that smile off my face,
Sitting here, in the hot bleachers of
The Valencia arena, where matadors kill
Bulls. Can I spin into myself deeply
Enough? What of the drills on the used
Parts of speech, the past tense to describe
The tense passing minute of a red cape
Flashing over white shrieks of horns?
I can imagine the seamstress, who earlier
Twirled bolts of whole cloth, sewed what was
Once nothing into something hemmed in
By thread. Like the guitarist, plucking the cat
Gut, a string of pink intestine that holds
The sound of the body cavity. I have
Always believed in the face of things,
Facets that rub off, attach themselves
To memory, become sponsors to seeing
Things that weren’t there only a minute
Ago. The matador takes home with him
The face of the bull he’s killed, can
See the imprint when he holds the cape
To the mirror: what he sees he sees,
His own face and mine, the darker spectrum,
Knowing he should have known the truth
At the tips of the bull’s horns:
The only thing left for himself was life.

_This poem was originally published _under the name Edward Kleinschmidt. 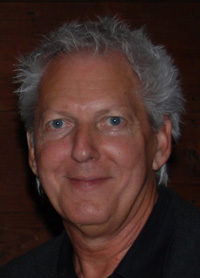 The poems of Edward Mayes have appeared in The Southern Review, Poetry, The New Yorker, AGNI, The American Poetry Review, The Best American Poetry, and elsewhere. His books include First Language (Juniper Prize, University of Massachusetts Press) and Works & Days (AWP Prize in Poetry, University of Pittsburgh Press). He lives in Hillsborough, North Carolina, and Cortona, Italy, with his wife, the writer Frances Mayes. (updated 10/2013)