“How lucky that I ran into you
When everything was possible”

Yesterday I was leafing through the Times
and saw your face suddenly
fifteen years younger smiling up
from the obituary page and stopped
breathing for a second and didn’t answer
the question Julie was calling from upstairs
but after I started breathing again called
back to her that you had died as if
that were the answer to her question.
I don’t know if you can hear me
where you are now or whether you
will get this at your new address
(it is an affectation to address the dead,
one literal-minded poet once told me)
but reading your poems I know anything
is possible, and you addressed everything
with contagious ebullience:
my first and best teacher, who let me
into Imaginative Writing not because
the poems I showed you were any good
but because as you said in front
of the entire class that first day
there were so many of them!—and I was too
happy to be humiliated, proud to be the only
freshman of the chosen twelve, and I have
always been grateful and of course
you were right about the poems.

After I read the article, Julie and the kids and I
drove to Fenway Park (the Sox
were playing the Tigers). It was a weird murky day,
the sun shining weakly with an eerie light
through a sallow haze that the radio told us
was smoke from forest fires in Quebec.
I thought about you during the game—
how I was such a small part of your life
but you were a big part of mine, especially
those years at Columbia which have stayed with me
all this time, how we were both from Cincinnati
and I always liked to think that meant something
even though it didn’t mean that much
but I still remember when I told you
you halted in surprise on the way out of
Hamilton Hall. I remember your office
on the fourth floor, looking through the window
at pigeons flirting on the ledges as you read
my poems or wrote a letter of recommendation
at tremendously high speed and then
read it aloud to me while I thought
Is anyone going to believe this? but it
and others like it got me to Paris
and a few less exciting places like
graduate school. And after that I didn’t
see you as often but when I did was always
floored by the vigorous way you looked
at the world, like the time I showed you
a colossal elm with twisting limbs and you said
it was like a complicated stanza pattern
you’d like to write in. When something big happened
like a double play or a home run I’d come
awake to the crowd’s cheers and wonder
if there was anyone else in the ballpark
thinking of you. The flag was at half-mast
for Ted Williams (and of course, I thought, for you).

But it was the exuberance of the crowd
in the later innings that was most like you,
and when the wave started going around
the Fenway grandstands I held
my sadness in check and joined the celebration,
throwing my arms up with all the others
as that many-tentacled surge moved
with the energy of one of your poems,
coming to a brief stop at the left field stands
and then reappearing in the center field bleachers,
leaping invisibly across the synapse
of the Green Monster, like your leaps
which always amazed me, and then it
came toward us again and we laughed
in anticipation and rose up cheering
with everyone around us as the wave
moved past us and we sat down
until our turn came to be part of it again.
The sun was still trying to come through
and sometimes pierced the haze as if
to look down on the stadium—Kenneth,
life burst from you like light from the sun,
and if now that sun is partly obscured
we have your poems, your wild joy
and the way you never stopped asking
and answering the question,“So what
is the ecstasy we are allowed to have
in this one life?” 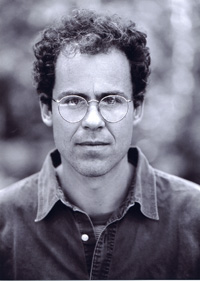 Jeffrey Harrison is the author of five full-length books of poetry, most recently Into Daylight (Tupelo Press, 2014), Incomplete Knowledge (Four Way Books, 2006), and The Names of Things: New and Selected Poems (Waywiser Press, 2007). The recipient of fellowships from the Guggenheim Foundation and the NEA, his poems have appeared or are forthcoming in The New Republic, The Kenyon Review, The Hudson Review, Pushcart Prize XXXVIII, The Paris Review, The Yale Review, TriQuarterly, AGNI, The Southern Review, Poetry, Poets of the New Century, and other magazines and anthologies. (updated 10/2014)