Often in our garden these summer evenings a thrush
and her two nearly grown offspring come to forage.
The chicks are fledged, the mother’s teaching them
to find their own food; one learns, the other can’t—
its skull is misshapen, there’s no eye on one side
and the beak is malformed: whatever it finds, it drops.

It seems to regress then, crouching before the mother,
gullet agape, as though it were back in the nest:
she always finds something else for it to eat,
but her youngster’s all but as large as she is,
she’s feeding two of herself—she’ll abandon it soon,
and migrate; the chick will doubtlessly starve.

Humans don’t do that, just leave, though a young woman
I saw rushing through the train station this morning
with a Down’s syndrome infant in a stroller
I thought might if she could. The child, a girl,
was giggling so hard at how splendidly fast
they were going that she’d half-fallen from her seat,

until the mother braked abruptly, hissed “Shush!”
and yanked her back into place. The baby,
alarmed, subsided but still intrepidly smiled as the mother—
she wasn’t eighteen, with scuffed shoes, smudged eye-liner,
and a cardboard valise—sped on, wielding carriage
and child as a battering ram through the oncoming crush.

The thrushes have been rapidly crisscrossing the lawn
in and out of the flowerbeds all through the long dusk,
now they leave, the rest of the birds go quiet—
I can hear someone far off calling her children to bed—
and it’s the turn of the bats, who materialize, vanish,
and appear again, their own after-selves, their own ghosts. 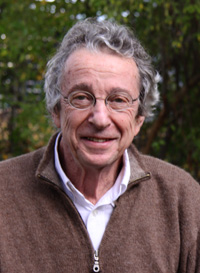