Sundays, instead of church, worship in his eyes for another
Kind of god, the iconography of trees, my father
Dragged a rucksack, notebook and me over his sacred ground,
A forty-acre farm at Monadnock’s edge. To him, it was a grand
Estate: a hummock of granite wedged between more rock
And a river called the Squanicook. Sundays, the two of us would track
The buried brook where it had its start under laurel and sluiced
A dozen clotted paths, where once some ancestor sliced
The forest open, and oxen, yoked, had dragged a road.
This was ours. New Hampshire sprawled to the north, broad
And foreign as another country, and with the vague disdain of six,
I knew our woods were better—even the burdock on my socks
Was Massachusetts. To the south, the hill softened into slope,
A field crippled with a thorny orchard, where drops slipped
All fall into long grass, crisp, imperfect, tart.
But the woods were where we walked, where my father taught
Me patience and delight. City-born, he couldn’t tell
One weed from another, and later, like a convert in the still
Shaky morning after, he said their new names in praise
As though they were angels. He walked for miles, in awe for days.

Something more than novelty crooked its finger—silent, austere,
Deeper than trees beating their wings or the purblind stare
Of a black snake circumscribing a sapling’s wrist.
Father carefully pencilled facts, describing rust,
Habitat, leaftype, genus, disease, but his meticulous chart
Of changes didn’t teach me to name the woods’ mysterious heart.
Father, I’m frightened. Why are things so beautiful and sad?
Stern and tall, he cupped my chin, and thinking, said,
“Imagine nothing. Write what you see. Naming woods
Will give you all the world.” Into my hands’ crib, he word-
Lessly put the pen, and hefting his stick, walked on.
Hypnotized and crouched, I heard ice crimp, mimetic, on the pond
And spruce or beech or birds murmuring over me. The task
Was how to write birch when I saw the crumbling, pale tusk
Of a fallen mastodon bridging the path, or ash when the air
Was frenzied with the head of a neighbor’s rain-black mare.
Sycamore waved at me like drowned Ophelia’s hair.

Something was called awake by our walking here, and spoke.
Under the trees’ arch, archives in which history woke
And stumbled beside us, the spirit of a thousand seasons breathed,
Asking recognition, offering its layered face for me to read.
Father thought God slept in delicate leaf-veins
And lay articulate in arbutus, sumac, and the quick brain’s
Notation of change; that daily-witnessed death could be
Outrun if faithfully observed. Beside him, I learned duty
And devotion are the same when love and terror walk together.
I wandered in an aura of fireflies, wondering at the other
World, where rivers of light ran over our house and hill.
Spun from the rungs of an ancient water wheel, it spilled
The sky’s bank, we swam bewildered through its luminous snow.
Father at the crest of the hill in a blizzard of stars knew
Only something moved him. Bathed in earth’s pity, the end
Of the day darkening his face, he would shake when I took his hand.
(When the walks failed, there was no resurrecting him.
Sickness spread outward to the bole, to his northernmost limb.)
I have kept on walking, scanning the forest twice:
Once as my father’s daughter, perceptive, spare, precise;
Once as the Muse’s child, insisting on hell, on paradise. 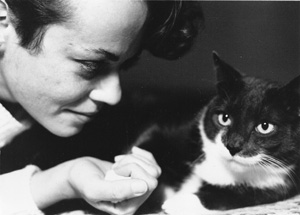 Melissa Green is the author of three collections of poems, The Squanicook Eclogues (W. W. Norton & Co.), Fifty-Two (Arrowsmith Press), and most recently Magpiety: New and Selected Poems (Arrowsmith), and two memoirs, Color Is the Suffering of Light (Norton) and The Linen Way (Rosa Mira Books). She has received the Norma Farber Award from the Poetry Society of America and the Lavan Award from the Academy of American Poets. Her work has appeared in AGNI, Little Star, The Paris Review, The Best American Poetry, and elsewhere. She lives in Winthrop, Massachusetts. (updated 10/2016)