Sometimes that which is dangerous is made only
that way because we are dangerous, too. See:
a crowded stadium, or, an etiquette that we do not
respect. A group that believes itself

a search party, but can’t agree on what it’s
looking for: bravery, for one, lunch for another,
and thusly the inner workings of this small

institution break down. Now they are looking
for a way into or out of a brawl, depending on
how hard they believed in the party’s original end.
You can ruin many rules by disregarding them,

though just not following’s never enough, because
not following, because running a red light with fear,
means your fear respects the authority against

which it rebels. The rule of right side out.
The rule of hand holding. The rule of what is or is not
an occupied chair. A password was for a long time

the thing you gave at the door, when this giving
is a spoken thing. Here’s a secret, now tell me
another, was the exchange, wherein the second
secret is a room. The rule of chambers. The rule

that says you never stop looking. The rule that
tells all the other rules what they’re supposed to do. 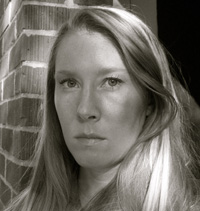