He has no gift for friendship, for he is void of all curiosity.  Or rather,
He’s only interested in matters touching the Lord Hamlet himself.

He was born in a lab whose walls were lined with giant, steamy jars
Of the milk of the various mammals, from the milk of camels to the milk of men.

Pig milk, monkey milk, rat milk.  Dog and cat milk, and the milk of whales.
The milk of the duck-billed platypus and that of the platitudinous buck.

The thick, red milk of the vampire bat.  And the black milk of the black bear.
—A backlit wall of bottles, ranged from commonplace to rare!—

There was stallion milk and rooster; anaconda milk and shark;
There was tarantula milk, Venus flytrap, and that of the barking aardvark lark.

And he would have been perfectly normal, would have grown up socially adroit,
But he stripped the sheet off a drinking straw, took a blade and shaped a point;—

And he syringed into his body a few drops from every jar,
Fell in the floor and spoke languages he had never heard before.

He spoke Titmouse; he spoke Miaow.  He spoke Moo and Gnu and Ha.
He spoke three kinds of Chickenhawk, and the thirty dialects of Baa.

And from that day to this, Mardud’s been lost in the zoo:
A cautionary tale for whoever knows how to read the clues. 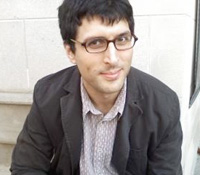 Anthony Madrid lives in Chicago. His poems have recently appeared or are forthcoming in The Cincinnati Review, FlashPoint, Forklift Ohio, LIT, Now Culture, PANK, Shampoo, AGNI Online, 6X6, and WEB CONJUNCTIONS. The title of his manuscript is THE GETTING RID OF THE THAT WHICH CANNOT BE DONE WITHOUT. (updated 7/2009)