Moths tend to slip under the radar screen of our attention. Unlike the flashy butterfly, the moth is plain, shy—a flutterer best seen when it hovers tentatively over the lamp where you read your book on an autumn evening. You notice the moth in your peripheral vision while not focusing on it. For a moment or two you let yourself be distracted by it but the moth’s presence is elusive and you soon turn back to your reading.

Now imagine that you have entered a universe of moths—say, a faraway place where day after day, season after season you study the movement, habits, life and death cycles of moths. If you can imagine doing so, you will have entered the world of Lisa Olstein’s Lost Alphabet. You will be in a strange place where you can’t quite get your geographic bearings—and you will be consumed by the essence of moth-ness.

In this collection of seventy-five short prose poems with bracketed titles, Olstein creates a world closed in on itself, with little reference to the larger world outside. Here, the reader is placed in a remote village where nameless neighbors make brief and infrequent appearances to the hut of a woman (the narrator) who is collecting and documenting the species and behaviors of moths. We are told it is a village whose currency is wooden spoons and iron pots; meals are bare; mending is done with horsehair made fine by running it through the teeth; and men enact a ritual by lying in pairs in the fields, one standing the other kneeling. Some of the villagers keep horses or sheep. Somewhere nearby there is a river. That’s about all we are told. It is a village where the gesture telling visitors to come is the same one that tells them to go away. That’s about all we know.

The hut itself is filled with moths, envelopes, notebooks, and drawings. The poem [kindred forms] describes our lepidopterist’s deep submersion in her subject:

When not studying specimens, I see their feathers
everywhere: fine-rivered hair on a baby’s head,
bright cloth he’s bundled in, angle of a lamb’s ear.
There, at the examination table, the world presses
in: dust on the forewing, crenellations of castles at
the tip, antennae like the jaws of fossil fish pressed
into the riverbed. It is remarkable to be far from any
coast and still to feel at the very tip of land, the last
place.

She feeds the moths, takes them to the river when the hut is too hot, captures them, draws them, and then release them.

We do not know why the moth-collector conducts her study—whether it is for academic or personal reasons. We do learn that she uses her observations to understand something about her inner self and about the severe headaches she frequently suffers. “What discovery will lead me from who I am?” she asks. “What am I in the village? Who am I anywhere?” Another time she reports, “Some mornings I’m filled with longing, with sadness that has no cause.” Often she refers to the head pain: “I will not cherish the pain or need it, but there are patterns, parts of my brain gaining voice, grown hoarse. Small doors of perception open, close.”

Lost Alphabet may or may not cover the four seasons. It’s hard to say.  The narrator begins her life in the hut before the cold weather sets in and ends it after the moths have bred and left their cocoons. Time seems to drift by. Some time during the year, a villager, Ilya, comes to the hut to visit. Eventually he becomes interested in both the moths and his hostess. In the five-line poem [a raven touched his eyebrow], we learn that Ilya has decided to stay.

Ilya sits with me through the morning and into
the afternoon—scapegoat, savior, nursemaid, fool—
brings drink I cannot drink. Slowly, the absence of
pain arrives like snow falling. It was on a day like
this when, visiting, Ilya decided to stay. At least,
never left. It is customary here to accompany the
wounded. Whoever is able, and near.

Lost Alphabet creates its quiet, eerie, subterranean effect by Olstein’s use of form and language. Throughout this slim volume of relatively short poems (none longer than 12 lines and all right justified) the poet produces a delicate fluttery mood with trim language devices: simple sentence, occasional fragments, and lightly matched “families” of sound. The poem [a lesson in liberty] employs the following words with soft sounds: storms, sullen, forgiven, become, accounts, houses, women, some, commemorated; the poem [immaculate holomelina] combines deeper sounds: fog, now, crops, storm, calm. In each case the sounds come from different sound-producing organs: in the first case, primarily in the lips and the front part of the mouth; in the second, further back in the throat. In both cases the sounds seem to slide into one another creating an overall plaintive, quietly sad tone.

The titles contribute to the same somber effect. They are more asides than introductions—suggestions what will follow rather than declarations or descriptions. They seem to have no connection at all to the poems that will follow; illustrating, once again, the opacity that is true of the moths and the narrator both. [saturniidae], [oak beauty], [if the cities are not given], [the blessing you hope never to come near] are examples of titles that seem unhinged from the poems.

Toward the end of this subdued, almost ethereal collection of prose-poetry, Olstein begins to draw together the speaker’s outer world of moth observations and her inner life. In [from this vantage point your view will be clear], she writes:

Any shift in philosophy introduces the need for new
habits of body. I am learning how gently to lift
them, to turn them swiftly and rest them again, on
their wings, wings to table, which I sand smooth
each morning. To do it with no fluttering, with as
little as possible. It is a strange gymnastics, their
bodies, mine: what to grasp, when to release,
the nature of a turn, the will of the whole channeled
into the fingertips. It takes all my strength. It is
necessary to practice, to imagine myself the moth,
my arms its wings, my legs gone.

Much has been written about the prose poem. Most associate its first use with the French poet Baudelaire, but it has become so familiar that the debate about its nature and legitimacy stirred up in the nineteenth and early twentieth century seems to have almost completely faded away. Most agree now it is a form that conjures expectations of narrative with a focus on language. This can certainly be said of Olstein’s collection. While the poems, individually and collectively, have a story line, the effect is achieved by the exquisite selection of words, arresting similes and metaphors, and a crafted syntax that conveys both the mood and meaning of the piece as a whole. 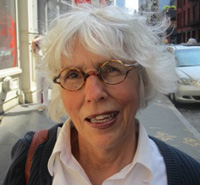 Lynne Potts is a former poetry editor of AGNI. Her first collection, Porthole View, won the National Poetry Review Press Prize in 2012. A second collection, Mame, Sol, and Dog Bark, came out from the same press in 2017. Other work has appeared in The Paris Review, Denver Quarterly, Crazyhorse, American Letters and Commentary, Hayden’s River Review, Guernica, and elsewhere. Selected by the Massachusetts Cultural Council as a 2012 Fellow, she has also been awarded fellowships by Virginia Colony for the Creative Arts, Ragdale, and Moulin a Nef in Auvillar, France. She has taught poetry in the American School of Marrakesh, Morocco, and the Global Institute of Technology in New York City. She  lives in Boston and New York, working as a freelance writer. (updated 7/2019)