At the hotel where you decide to stop, just off
Highway 350, the woman behind the front desk
slides a keycard across the faux-marble countertop
—her hands bigger than yours. Long ago that
would’ve mattered, would’ve made you want
to make fun of her later, with friends who’d have
noticed as well. Now, you don’t care. Now,
the fact of those hands settles, goes nowhere.
The men who helped shape you are all different
types of gone, and without what they had
to laugh at, you realize, here in this bright lobby,
you are more yourself than you ever were then.
How quiet it is inside your head sometimes.
How quickly you could be cruel, and how
confidently. The woman says, There are
bigger storms than this. It’s a corny thing to say
while nodding toward the entrance where rain
pelts the glass, but because you might’ve been
mean to her, once, had this happened say
fifteen years ago, you follow along, offer: I bet
you’ve seen them. She pulls her hands
behind the counter, relaxes against the seat,
those fingers now resting over a keyboard,
before she goes into a story about herself, maybe
the most important one, which you will wonder,
much later, if she’d told every other guest, or
if she’d just rehearsed it over and over, imagining
what it would be like to tell. She tells it
so matter-of-factly. That she moved from Texas,
where she learned everything she needed to know.
She says it like that. You wouldn’t know the name
of the place, that town. And it doesn’t matter
now. What matters are her two kids—who love
soccer—and the fact that she brought them
with her. How could I have left them? she says.
Who would I have been? She won’t tell you
exactly why she left, not in great detail, and you
won’t ask—not because you’re trying to be polite,
or not really, but because you’re so tired, and the rain
has been playing the only song it knows
this entire time. You don’t care about how
she came to be here, in this too-bright hotel
off the highway between your life and the one
you sometimes still want to live, somewhere
in a California she’ll never know, in a California
that isn’t really there. Though the next morning,
when you wake for coffee, a small part of you
will wish it was her there, still, wanting to continue.
A man behind the counter will point you toward
glazed pastries wrapped in plastic. Checkout time
is eleven, he’ll say. So go ahead, now, inside this
clichéd stormy night, slip the keycard
in your pocket when she’s done talking
and don’t ask the names of her children
or the whereabouts of the man she left, that figure
in the window of her story. Nod one last time.
While the wind presses its shape against the glass.
While the rain asks to have everything back, and gets it. 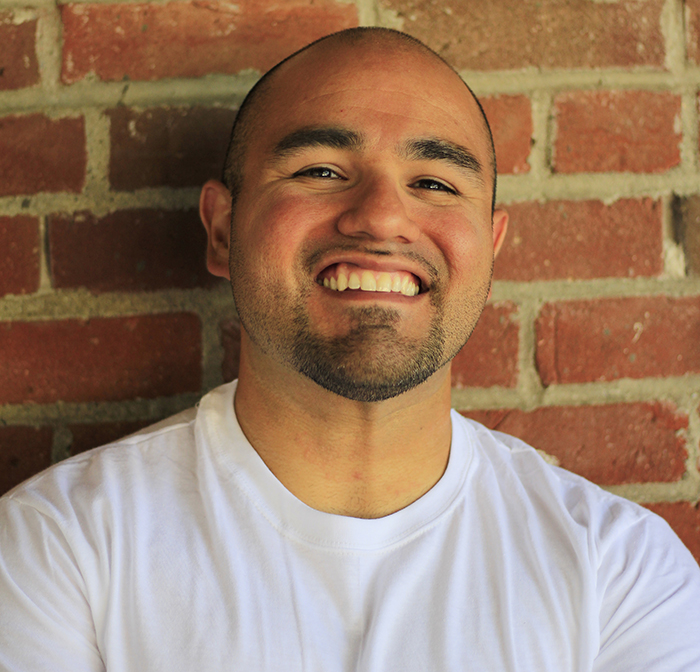 Michael Torres’s debut collection, An Incomplete List of Names (Beacon Press, 2020), was a National Poetry Series selection and was named one of NPR’s Best Books of 2020. He was born and raised in Pomona, California, where he spent his adolescence as a graffiti artist. (updated 10/2022)