Not much was off-limits.
Sleepovers were not allowed & no going past the gate.

My homeboy Guillermo got hit by a car. He ran after a ball
without looking & all he could do in that airborne moment was

notice how sunny it was. He hobbled, half-bolted, begged me
not to tell his father. Willie Sr. appeared like a banging

heat, asked what happened. He forced the driver
into the passenger seat & headed to the ER.

I learned that Guillermo had fractured his pelvis
& that weather is a narrative about the body.

We called our neighbor Señora whenever we
addressed her. Um al Kalab in private. Mother of dogs.

She cared for two sweet cocker spaniels. She once
showed up with a butcher’s knife. I could smell her blood

rising from her arms. We speak of struggle
in the third-person possessive. My mother always

starts teachable moments with Habibi. Habibi,
she said, you can’t go to the bathroom here alone.

They found a kid my age dead in that bathroom.
He didn’t have any pants on & someone shit in his mouth.

We were allowed to sit on the stoop with our friends
at night & scan the sky for UFOs.

It must have been, for our folks, some kind of daily meditation—
how much damage an unattended world could do to us

& we to one another. That a game of hide-and-seek
could run a little long & change us.

The more accurate translation is—
was found in his mouth. Passive voice.

I worry about my daughter’s nosebleeds. I imagine
my house on fire several times a month. I run

drills in my head. It happens at night. The blaze
starts mercifully somewhere downstairs. It’s

the first snow of winter. The smoke is impersonal.
We wake the girls. Break the bathroom window.

I jump first. She throws the children out one at a time.
I catch who I can. 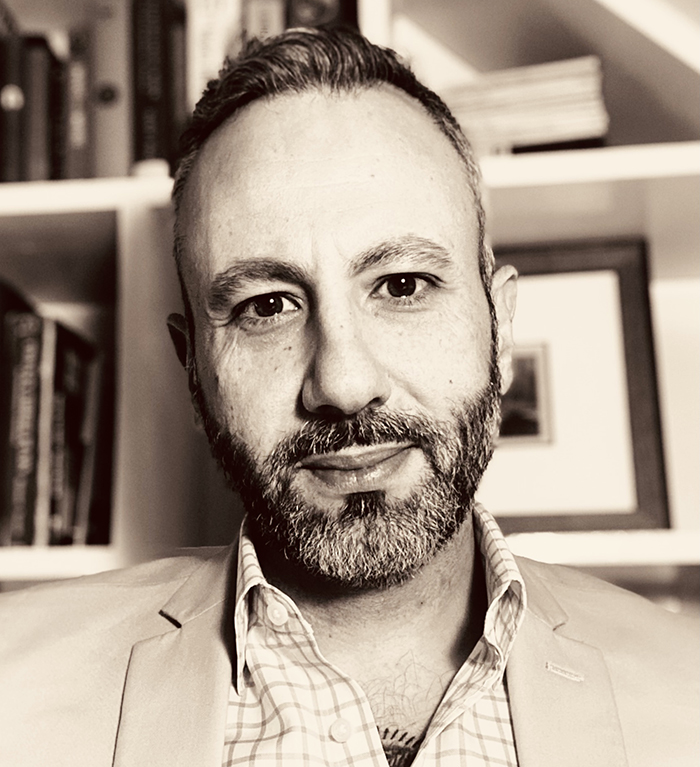 Issam Zineh is the author of the poetry collection Unceded Land (Trio House Press, forthcoming 2022) and the chapbook The Moment of Greatest Alienation (Ethel, 2021). His work has appeared or is forthcoming in Guernica, Pleiades, AGNI, Tahoma Literary Review, and elsewhere. (updated 4/2022)