Exhaustion enters me, as winter does
The emptiness of January days:
With clarity. These trees, starved down to the bones,
Seem barely able to withstand the weight
Of what I am resigned to call the truth.

Last night I watched it happen. It was death,
As usual and present as the view
Of downtown Boston from my patient’s room.
Before the bleed, he pointed out for me
A wisp of smoke that rose like mystery

Against the certain, dusk-blue sky. “I pray,”
He whispered to me as I probed his liver,
My hands, as in I pressed, brought close together.
Outside, a siren dwindled to a sigh.
“Do you believe in Christ?” I tried to pry

The image of the smoke (which wasn’t more
Than some exhaust from an anonymous
Brick chimney) from my dimming faith that was
At once incomprehensible as stars
And as unknowable as they were far,

Appearing just above the skyscrapers.
I watched them from beside his bed, the world
And all its lights less glorious somehow;
I wondered, heartlessly, at who we were.
I didn’t pray—I had forgotten how—

And then it came. The torrent of his blood,
Unstanchable, in roaring waves so full
I was less horrified than plain amazed.
His life flared out in red before my eyes;
The clots that lingered in his mouth were slick

As cherry candies on his startled tongue.
He looked at me, as pale as I was dumb,
And faded to his final peace. With God?
I searched the skyline for his wisp of smoke,
But night had rendered it invisible. 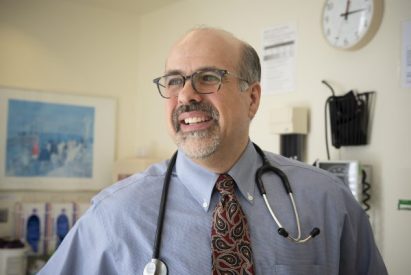 Rafael Campo’s most recent book is Comfort Measures Only: New and Selected Poems, 1994–2016 (Duke University Press, 2018). He is the author of six other volumes of poetry and two collections of essays. His work has recently appeared or is forthcoming in The American Poetry Review, The Hudson Review, AGNI, Poets.org, Scientific American, and elsewhere. He practices and teaches general internal medicine at Harvard Medical School in Boston, and is poetry section editor of JAMA: The Journal of the American Medical Association. (updated 4/2021)