Lot’s wife hurried on with a few things in a bag
In the rubble of the desert. The dirt and the rocks
Were as red as the sky. She had never run
So fast, or carried so much, and still
It wasn’t fast enough, and she had had to leave
Most of her stuff at home. Ashes
Got in her eyes and pebbles in her shoes,
And she couldn’t keep up with Lot
Or the two girls, who had already
Forgotten their fiancés.
It was almost dawn, a time
She had always had to herself—
Out in the yard, by the ovens,
Humming, she made bread
And listened for the earth to rise
On its many wings, with its conflicting songs.
The patter of brimstone in the distance
Quickened, and the first screams
Swept across the empty plain
Like a question which, in tears,
She turned to answer. 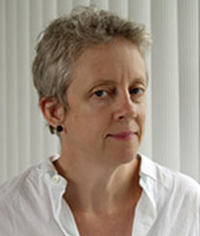 Mary Baine Campbell is a poet and a professor at Brandeis University, where she teaches medieval and early modern literature and creative writing. She is the author of two books of poetry—The World, the Flesh and Angels, winner of the 1989 Barnard New Women Poets Prize, and Trouble. She has also published two scholarly books. Campbell is currently writing a book on early modern dreams and putting together a new volume of poems. (updated 8/2012)