The markdowns were great. The racks
of coats so full you could barely
browse from one item to the next:
overstuffed, like a sandwich with meat
dripping out the sides.
Of the buffoons who ran for high office,
we preferred the one who walked like a penguin.
His Il Duce routine amused us.
And his hair, which had a translucent brilliance
like something a princess would
spin straw into. We thought he couldn’t win,
so it became fun to imagine, even
talk about—as entertaining
as disaster movies from the ’70s
with their single-word titles:
Airport, Earthquake, Meteor.
We were—there’s a phrase from Hamlet—
incapable of our own distress
which, if you think about it,
is not a bad way to be. When it finally snowed
we were relieved, as if winter,
a friend we’d feared we’d offended,
had called at last. And it was good, too,
how they closed offices early
so we could walk around in it,
like powdered sugar over the asphalt,
our footsteps blackening in our wake.
We were all about walls in those days.
The big ones, sure, but also the small ones,
how they gave shape to our little parcels,
let us walk around naked outdoors.
And the electronic ones,
within which we could respond to people
who thought exactly like we did
in progressively finer distinctions.
It did occur to some of us that this would
result, eventually, in personal walls,
that we might walk around
with something like cardboard boxes
floating about our midriffs.
But hadn’t stranger things been done
merely for fashion? At least
we weren’t wearing bell-bottoms. 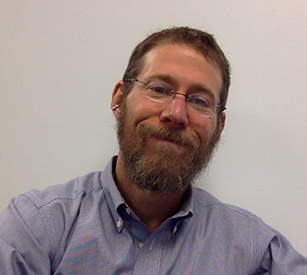 Benjamin S. Grossberg is the author of four full-length poetry collections, including My Husband Would (University of Tampa Press, 2020); Space Traveler (Tampa, 2014); and Sweet Core Orchard (Tampa, 2009), winner of the Tampa Review Prize and a Lambda Literary Award. He directs creative writing at the University of Hartford and lives in West Hartford. (updated 4/2020)