On the S-Bahn from Frankfurt to Kronberg,
a brief journey to the rustic, elegant world of investment bankers,

where planes and lindens mingle uphill to the old city,
ending at the bluff at Kronberg Castle,

I see leaning against a hand rail Daniel Schreber,
the Frankfurter Allgemeine held before his face when he was young.

The last time it was at a play in the Bowery,
and before that walking the fairgrounds in Huntsville,

where he turned as if to speak, the judge at fifty,
wearing the blue coveralls of a groundskeeper.

Doctor Hepp explains an old illness with a new name,
prescribes salts from mines in Bolivia.

“However much you see you are seeing inward,” he says.
I look at the roof of the Goethe Institute,

down Bockenheimer at the statues of dinosaurs
standing higher than trees, considering

that took them, Rhine to Main, Main to Rhine, in orbits
never bound for land. 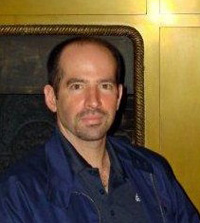 Keith Alexander spends part of the year in Los Angeles and part in Frankfurt. He has had poems published in numerous magazines, including Prairie Schooner, Seneca Review, Hanging Loose, and The Sun Magazine. At present he is finishing a collection of poems, his first, inspired by Robert Burton, called The Book of Treatments. (updated 9/2012)