In Wednesday night’s class, the Introduction
to Forms & Techniques of Poetry, I’m teaching
as though we’re on a small raft.
We are on a small raft.
We may never see the ones we love again.
Every poem is a message in a bottle.
Revision is urgency with tweezers.
How to pull out the bit not meant
to be there.
My brother died before midterm this term.
I have a student who has his name.
I call on this boy as often as I can.
I say his name aloud to alter
my relationship to grief.
I see you have your hand up, Sean.
I don’t know if my brother ever read
a poem in his life. I worry I’m selling
poetry as salvation. Drinking and selling lines.
And in this same class I have a student
with my moved-out husband’s name.
The husband-student doesn’t raise his hand, speak.
And in this same class, a student with my
father’s name. He sleeps in the back row.
I do not call out his name. I don’t want to wake him.
I do not put them in the same group.
I spread them around. I watch myself
closely: be very fair to the husband.
He’s done nothing wrong. He got scared.
Of what? Garden light and dying and death.
Of what? The interior experience. Not well lit!
After the midterm, I imagine they’ll be
back to themselves: the students will
manage their own independent identities.
Already things are settling.
But my bite is not correct.
I’m dubious about the last stanza.
I walk in the evenings alone. I bought
a linen dress with horizontal stripes he’d hate.
I thought it would make me appear wider
in the sense of unstoppable.
But wearing stripes I just feel like I’m in jail.
I read into all hours. I dread seeing him weave
through town, rooms with women, his looky look.
I know “love” when simplified to its lowest
common denominator means sorrow
tomorrow. I know it isn’t too late to change.

Tonight I’m introducing the English sonnet
as a method for containing anxiety, grief’s pulse.
We sit on the floor. We write by hand.
One hundred and forty-four syllables.
I call on my father. I call on my brother.
We write the sonnets as letters
to the ones we have lost. I have never lost
anyone, my husband-student says,
out of the blue.
You can lose me, I tell him.
Pretend you will lose me. 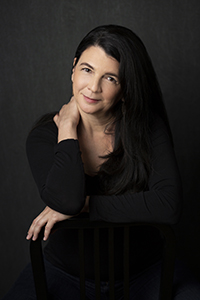 Heather Sellers is the author of two poetry collections—Drinking Girls and Their Dresses (Ahsahta Press, 2002) and The Boys I Borrow (New Issues Press, 2007), a finalist for the James Laughlin Prize from the Academy of American Poets—and four chapbooks. Recent poems have appeared in BODY, The Sun, AGNI, Five Points, The North American Review, and elsewhere. She teaches poetry and nonfiction in the MFA program at the University of South Florida. (updated 4/2020)