Make It Scream, Make It Burn is the latest book by Leslie Jamison, author of the New York Times bestsellers The Recovering and The Empathy Exams. A National Magazine Award finalist, Jamison has contributed to The New York Times Magazine, New York Times Book Review, The Atlantic, Harper’s, The Virginia Quarterly Review, and Oxford American. She directs the graduate nonfiction program at Columbia University.

Yvonne Conza: You opened the new collection with “52 Blue.” Is a first essay tasked with greater responsibility than the others? Does it map how a book should be read or considered?

Leslie Jamison: “52 Blue” is about a blue whale tracked by scientists at the Whidbey Island Naval Station—with a singularly high-pitched song, always tracked alone, who eventually became known as “the loneliest whale in the world”—and the motley crew of people who have become obsessed with him: a Polish tabloid photographer, an Irish union leader, a New Mexico singer, a woman recovering from a coma in Harlem. The essay introduces some of the themes that recur through the collection: the nature of loneliness and how people seek relief from it; the ways we find metaphors in (or impose metaphors on) the world around us; the strange, shape-shifting nature of hope and intimacy. And in that sense, it does give a bit of a map for reading the rest of the book. It’s also part of several long arcs that the book traces from start to finish: it moves from outward reportorial gaze to introspection, and from accounts of longing to investigations of proximity. To start with this distant, unknowable whale felt right, as the book would eventually move toward closer things, toward more dailiness: wedding rehearsals, school lunches, pregnancy cravings.

Conza: To gain a better understanding of the way you weave threads, I diagrammed “The Real Smoke” and found ten sections. Do the thematic and narrative nuances of your essays develop from an initial structural blueprint?

Jamison: It feels appropriate that you would create a kind of architectural diagram of “The Real Smoke”—an essay about falling in love with one man in Las Vegas, and then getting married there to another one—because the essay evolved from my fascination with the architecture of Las Vegas and the ways this architecture becomes a physical manifestation of the state of longing itself, specifically the longing to be somewhere else: Paris, Venice, Egypt, New York. The initial title of the essay was “Every Building on the Vegas Strip” because it was partially inspired by Ed Ruscha’s book Every Building on the Sunset Strip, which includes photographs of exactly that. (Well, a certain stretch of the Sunset Strip.) I had this plan that I was going to walk the entire length of the Sunset Strip and fill my notebook with observations about every single building I passed and everyone I saw—every fleeting glimpse of desire and desperation. Ultimately, the essay was about longing and illusion—the things that had interested me about Las Vegas architecture—but mainly in the context of relationships.

Which is all to say: I often start essays with a map in mind, but I always have to let the map get disrupted so that the real story can intervene. I try to stay committed to allowing that disruption. And often, when that disruption is carrying me in the right direction, the details will fall into their proper places; they’ll land in just the right spot to do the emotional work they need to do: In “The Real Smoke,” this is the moment my hair almost catches on fire in the blue flames beneath the chocolate fondue, or the sign about asparagus, or the Bellagio fountains dancing to the Titanic theme, suggesting just the right ratio of cheesiness and wonder.

Conza: The documentary/fine arts photographer Annie Appel is at the center of your essay “Maximum Exposure.” In an earlier version published in Virginia Quarterly Review, Annie expressed feeling betrayed and exposed. “Where are you in this, Leslie?” she asked. How do you think about what we owe our subjects?

Jamison: Back in 2014, a few months after The Empathy Exams came out, I got a letter from Annie Appel, who had gotten in touch because she felt a kinship between my work and her own. She told me about the project that had become the centerpiece of her artistic life for decades: she had been taking photographs of the same Mexican family for twenty-five years, on both sides of the border. I felt drawn to her project immediately—by its persistence, its obsession, its refusal to be done, and by the intense relationships she had formed with her subjects, and how these relationships had evolved across time—and spent the next five years trying to figure out how to write about it!

At a certain point, I realized my true subject wasn’t just Annie’s photographs, but the texture and quality of her obsession, and I started to realize that there was something contagious about her obsession—just as she kept returning to take more photographs, I kept returning to revise and redraft the essay, to give it a different shape. It was as if I’d also become allergic to the state of being done, or didn’t want to make peace with the inevitable reduction you agree to when you decide to call a work “finished.” So the piece eventually became about that dilemma, too, and about the process of its own construction: not only Annie’s complicated relationship with her subjects, but also my own complicated relationship with Annie (my subject).

When I think about what I owe my subjects, I guess it always comes back to the dignity of complexity. I don’t owe them total satisfaction or mirroring—i.e., I don’t owe them the story they would have told about themselves—but I do owe them complication, and ragged textures. I owe them the chance to be surprising, and to disrupt a reader’s expectations.

Conza: The tone of Make It Scream, Make It Burn suggests a vigorous kind of skepticism—skepticism not as a stance but as a consequence of investigation and research.

Jamison: I love thinking about a more capacious skepticism, with a more tender gaze—or a gaze that holds more tender curiosity than we might initially imagine. How can questioning something be a way of loving it? Or at least honoring it? I wanted very much to veer away from skepticism that reduced the objects of its gaze in order to dismiss them (of course, the same kind of reduction can come from veneration). In general, I tend to be less drawn to questions of categorical definition—In the essay “52 Blue,” is the whale really alone? And in the essay “Sim Life” are people actually reincarnated? I’m drawn more to questions about the texture of experience: What does it mean to people to feel a sense of kinship with a whale they’ve decided is lonely? What kind of satisfaction or reassurance do people get from believing in prior lives?

Conza: I perceive a subtle shift within the collection from more abstract philosophical concerns to a focus on the ordinary. As you say in the essay “Maximum Exposure,” “daily life simultaneously holds tedium and astonishment, drudgery alongside sudden surges of wonder.” Did anything change in your writing process during the seven years it took to complete this collection?

Jamison: I think you’re absolutely right that the collection started to turn its gaze more fully toward ordinary life, and that turn certainly reflects some of the changes happening in my own life—turning toward the domestic, starting a family, taking a full-time teaching job. Life became much more about subway rides and childcare and fitting in three hours of writing between the doctor’s appointment and the babysitter needing to get home; the inglorious logistics that can actually—I’ve found—pressurize the writing in glorious ways. I remember the first time I ever spent a few hours away from my baby to write: I went to a coffee shop down the block and was determined, absolutely determined, not to fritter away my precious three hours simply climbing out from under an avalanche of unanswered work emails. I wanted to do something that reminded me I was a writer. I ended up making an outline for an essay about my pregnancy, writing down scraps of narrative and memory on little napkins I’d stolen from the front register and arranging them across the table, and all of a sudden memories from years earlier—when I’d struggled with an eating disorder—started to assert themselves into my napkin grid, and that’s part of how I knew I wanted to tell those two stories together, which became “The Quickening,” the final essay in this book. Which is all to say: the gaze of my prose has increasingly turned toward daily necessity—what’s vital and alive and surprising about it—and the nature of my “process” has been increasingly contoured by daily necessity as well.

Conza: You wonderfully allow a multitude of truths to animate each essay. How do you arrive at that complexity?

Jamison: For me, the most important thing is letting the material surprise me. That applies to a journalistic piece—where I want to be open to the ways a subject might be more complex than whatever pigeonhole I’d wanted to slot them into—and to personal pieces, where I have to stay constantly attuned to the ways I’m oversimplifying my own story. I often urge my students to dig beneath the “cocktail-party version” of an anecdote from their own lives—the glib or flip version, smooth as a well-handled stone—to get to the messier version underneath, where the truth lives. And of course—as with everything I urge my students to do—I’m really giving them this advice because I need to hear it myself.

Conza: In the last section of Make It Scream, Make It Burn, what came as a surprise to you?

Jamison: Over the course of writing these personal essays, I was constantly discovering those messier layers of meaning I was alluding to above—the more complicated truths lurking beneath the polished stones of easy stories I’d told myself about my life. For instance, when I wrote the first draft of the essay called “The Long Trick” back in 2013—thinking it was an essay about the restless men in my family, my alcoholic pilot grandfather and my frequent-flier father, and about my relationship to absent men—much of the essay was structured around reckoning with the famously untranslatable Portuguese word saudades, which is often approximated as “longing for something that is absent.” But when I came back to substantively revise the essay a year ago, with five more years of living and loving and reckoning under my belt, I ended up discovering another valence of meaning attributed to saudades that I’d never seen before: not longing for the object but actually longing for the state of longing itself. Discovering that additional layer of meaning in the word helped spark an awareness of an additional layer of meaning in the experiences and relationships I was describing—that I hadn’t just spent my life longing for absent men, I’d actually grown attached to the state of longing itself. Some part of me didn’t want to leave it behind. That revelation was the final turn of the screw that the essay needed. 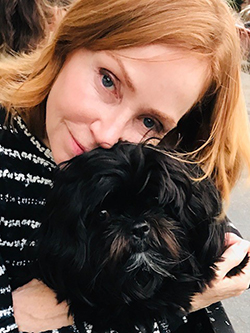 Yvonne Conza’s writing has appeared in Longreads, The Millions, Electric Literature, Catapult, The Rumpus, The Adroit Journal, and elsewhere. She has been a finalist for the Barry Lopez Creative Nonfiction Award, The Raymond Carver Short Story Award, and other prizes. (updated 11/2019)