We chose the Chinese restaurant because it was the closest. Outside was a neon sign with a phone number but without an area code, and I wondered if that was because the number was the same everywhere, which would mean that anybody calling with a U.S. area code was hearing the phone ring in the same place, a high-clearance call center somewhere below a Beijing sidewalk, where one of those chess-playing computers triangulated your call and routed your order to the right place, so you never knew the difference when you walked in the door.

We pushed in the jingling door and ordered at the counter without looking at the menu. The only other patron was a guy in the corner eating french fries and fried chicken, really going at the bone. We took the plastic booth in the opposite corner and sat there.

“General Chicken, for me.”

“I bet they could swap yours for mine and we wouldn’t know the first thing about it.”

“Maybe, except yours comes with sesame seeds.”

“Sesame seeds and that’s it. They’re probably using the same wok for both. The guy will split it between two trays and garnish mine with a fingerful of seeds and that’ll be that.”

“You can see them back there. They’re using two woks.”

“They probably have a take-out order. How many cooks can you see?”

“Are you including the cashier?”

“Not including her, two.”

“And how many items are on the menu?”

“You know, I haven’t counted.”

“It’s why they number each dish for you. To demonstrate how wide and ranging their selection is. And you know what it adds up to, not including combination plates? 159.”

“One five nine. Seems about right.”

“Seems about right, given that there are three cooks, one of them being the moonlighting cashier? Imagine how much stock this place would need to take in for those 159 dishes to be completely distinct from each other. Have you ever worked in a restaurant?”

“I’m telling you then, a menu of forty items is enough to fill up a walk-in all the way, plus a freezer. A place this size doesn’t have capacity for more than one refrigerator, and yet the menu is four times the size. It doesn’t make sense.”

“I am never ridiculous.”

“Sober up and tell me I’m wrong. The math doesn’t work out. The overlap has to be through the roof. Meaning, all twenty of those chicken dishes are differentiated by a garnish here, a pepper there, with sauce that’s always the same shade of brown.”

“That’s because they call it Special Pork. It’s a name game. That background drone you can barely hear? It isn’t the hood vents. It’s the shuffle of symbols where they can’t be seen.”

“The paranoia is setting in.”

“Ask the cashier for a packet of soy sauce and read the ingredients.”

“I’m not getting up twice.”

“Then you’ll have to trust me. Water, salt, vegetable protein, corn syrup, caramel color, and to finish, 0.1% sodium benzoate.”

“Exactly. Where is the soy? They’ve taken the soy out of soy sauce, and yet the packet keeps the name.”

“It’s saline solution. Same as what they use for a placebo in lab experiments. We’re putting salt water on our food and fooling ourselves into getting the desired effect.”

“Their gain. Our loss. Same chicken.”

“I had the same sort of thought when we were walking in here.”

“I’m telling you, if you walked into any American Chinese restaurant in this very moment, you’d see two guys sitting in the exact same spot we are, talking about the exact same thing, wearing the exact same clothes. And you know what one of them is saying?”

“Exactly. They believe that outside this restaurant the citizens of the world are carrying on with a certain orderliness. That out of billions of people doing billions of things that we can’t see, it’s safe to assume that it’s all one hundred percent ordinary.”

“I’m saying that once we sober up, we’ll find ways for the conversation to slide along. The soy sauce still won’t be the soy sauce, but we’ll have moved on to other things.”

“Instead we’ll be wondering what it was that we were talking about, and why the hell it seemed so significant.”

“Tell me something. How often are you very soberly going about your day, and you suddenly pause and say to yourself, My oh my, here I am in a significant moment?”

“Or so you’d expect, because everybody’s there in their nice clothes, when really, expecting something to be significant is exactly what negates its potential for significance.”

“I’m saying that you’ve only been to maybe twenty Chinese restaurants in your whole life, and yet, when I say the words Chinese restaurant, whether it’s here or in Camden, Tennessee, you see the same place, with the same booths, in your same brain.”

“Sure, you allow the small differences, a tweak here or there, but at the end of the day, when I say those words, the same part of your brain lights up. And my concern is this. How much smaller will the world feel, if every single Chinese restaurant out of tens of thousands looks like the same place?”

“It’s how our brains work. We consolidate.”

“We simplify. We take the grandeur out of the world. We fold it up until it can fit into a car window. Until we can talk about it in a few words that somebody else said.”

“Bring it all back to significance, maestro.”

“I’m saying that a soy sauce packet without soy is significant because in this moment, I’m deciding that it is. Because significance is decided, not found. And because I know that today, like all days, in some way prefigures the day I’m going to die.”

“That guy in the corner’s going to be chomping chicken next to your deathbed.”

“I’m saying that there might be someone next to my deathbed, and they might be chewing on something or just licking their lips, and that act will contain everything I’ve ever witnessed in my life, including this very moment here, with the guy in the corner chewing on chicken in a Chinese joint.”

“So you would agree that as we sit here in a plastic booth in—what was it?”

“No. 1 Champion Golden Noodle, we are simultaneously inhabiting a significant moment in your life.”

“Equal to my birth and death and the loss of my virginity. Yes indeed.”

“That’s very profound of you.”

The cartons steamed when we opened them, and we dumped two soy sauce packets onto each and a couple more of hot sauce and I heard the cries of chickens in foreign kingships and the high-pitched shriek that comes of the slaughtered and we laid upon it with our forks and knives and packed our lips with the greasy meat that went down half-chewed and swallowed whole, and when the carnage was over and the cartons hung empty like the oily hollows of some disemboweled beast we noted for the first time that the man chewing chicken in the corner was gone and that in our haste we’d each devoured what the other had ordered. 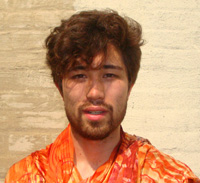