Your mother has agreed to share a tombstone with your father. You receive the sketch in an unassuming email from your sister. The subject line reads “FW: #124-5487 layout attached” and you nearly delete it without opening. 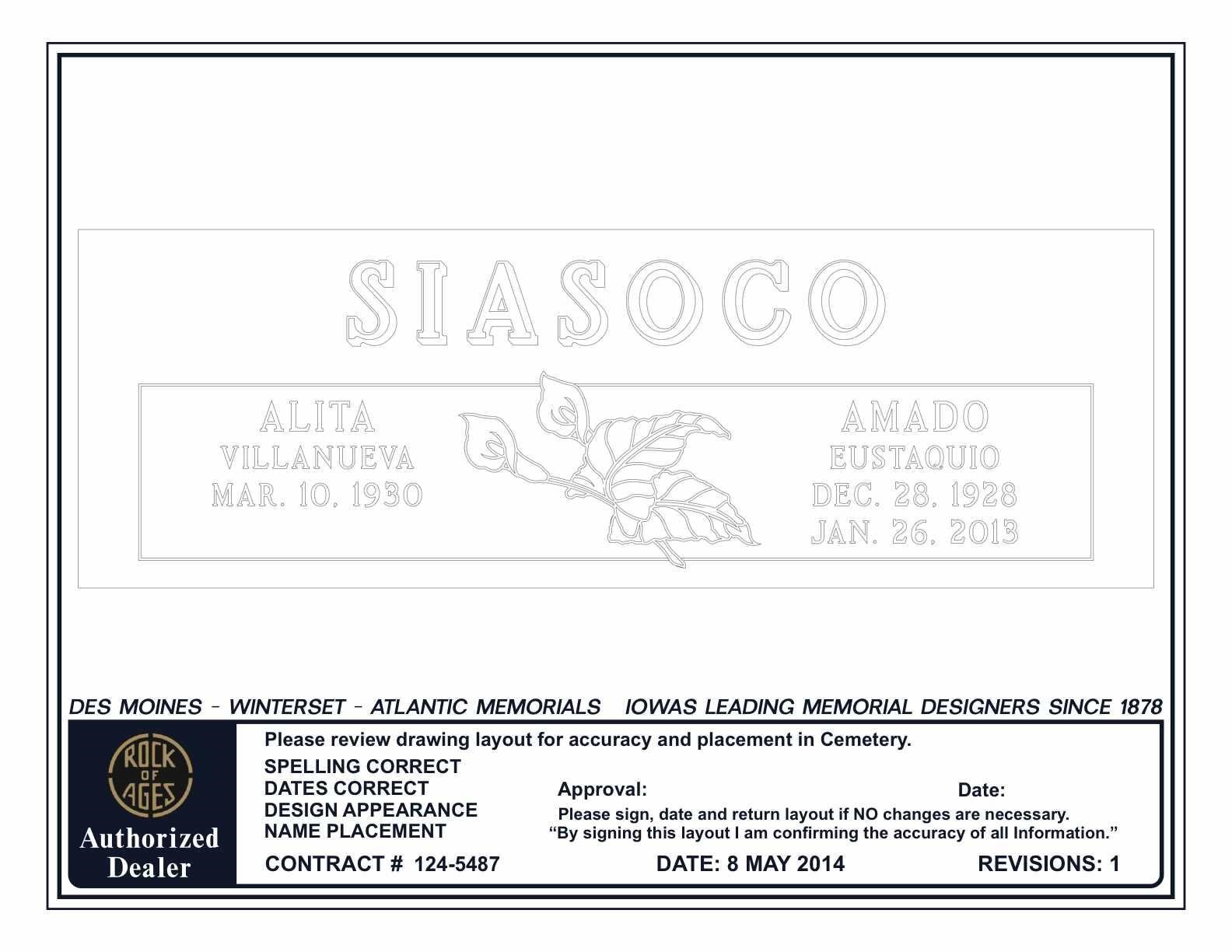 Your mother, very much alive at eighty-four, garrulous and kicking, is still dying her gray hair black. When you phone home each Sunday evening, she is quick to note how long since you visited, to point out your abandonment.

In the sketch of their tombstone, your father’s eighty-five years are commemorated on the right side of the frame. On the left, at the beginning of the line, your mother’s (maiden) name reads first. There is a big gaping hole where the death date will be. 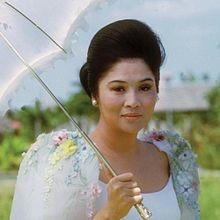 One of your writer friends in New York takes great pride in eschewing identity politics. You argue about the musical Here Lies Love (Does the glib techno music of David Byrne and Fatboy Slim capture the comatose Filipino people during the Marcos dictatorship? Or is it simply one more example of cultural appropriation, replacing the real and systematic corruption of one nation for the amusement of the imperial one?). You argue about Filipino food: Why denigrate adobo? Is the exoticization of balut (unfermented duck eggs) merely another form of twenty-first century othering? You argue about the obligations of writers of color, surely a dead horse: Must writers portray Filipino characters only in golden light? How do we create flawed characters, warts and all?

On whitestream literature, Toni Morrison writes: “For some time now I have been thinking about the validity or vulnerability of a certain set of assumptions conventionally accepted among literary historians and critics and circulated as ‘knowledge.’ This knowledge holds that traditional, canonical American literature is free of, uninformed, and unshaped by the four-hundred-year-old presence of, first, Africans and then African-Americans in the United States.”

You ask your writer friend about Lois Ann Yamanaka. The Asian American Studies Association rescinded the novelist’s award because of her unflattering characterization of a Filipino man who is also a sexual predator. Why did ethnic studies scholars scorn Yamanaka? Why recognize, and bring attention to, one of your own—only to turn your back on them under scrutiny? Who are the honorifics, who are the scapegoats?

If not your peers, who?

Your mother now lives with a man named W. in his ranch-style house on the north side of Des Moines. You have only been inside the house once. You have spoken on the phone with him less than a half-dozen times. The man is many years retired like your mother, with knee problems and hip problems and a voice gravelly from years of cigarette smoking. He bought your mother a car against the wishes of her children. She crashed it within a month.

When this man was in his twenties, W. pistol-whipped a man in a bar fight. The other man died. You ask your mother about the incident and she is quick to reply, “He did a bad thing.” You are driving her back to W.’s house after your family’s Christmas gathering (to which he was not invited) in a white rental car. She shakes her head, adding, “He did a very, very bad thing.” This is a true story.

Here is a group photo, taken in June of last year. 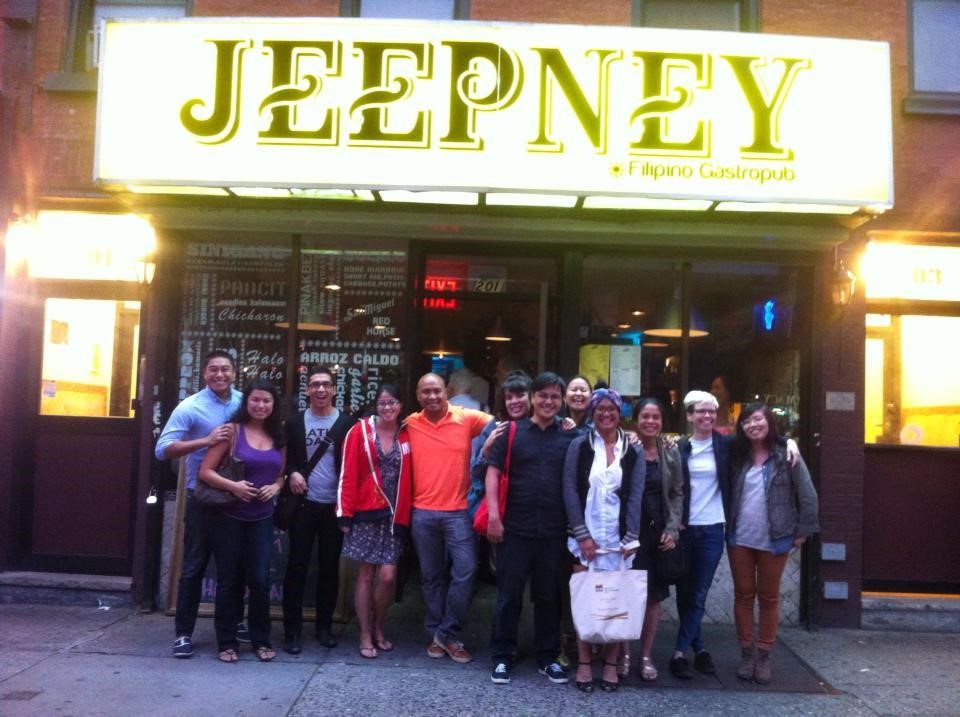 Your friends are New York poets, novelists, Fulbright scholars. You cannot help but compare the photo to another, of a similar group of youthful writers, taken at the infamous literary landmark Gotham Book Mart in 1948. 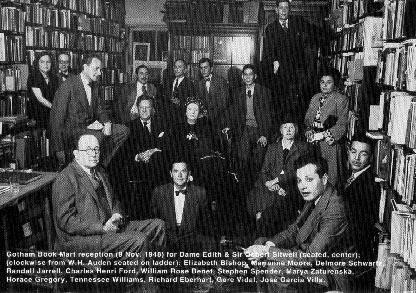 In the second photograph, the bookstore’s dark interior (as opposed to the public space outside a Filipino restaurant) provides the frame/work for a mirthless crew of literati: a distracted Tennessee Williams; an oddly posed Auden; a bow-tied, downward-looking Gore Vidal. You study Elizabeth Bishop, unsmiling, and hope that she is imagining a Brooklyn Bridge with her proximous love, Marianne Moore.

But it is the thin young man at the center who holds your attention: Jose Garcia Villa, a Pinoy poet who cut his teeth in The New Yorker and originated a poetic form rooted in the comma and a reversed consonance rhyme scheme. His is a brown face, outward gazing, full of solemnity, among his white peers.

Borges, like Garcia Villa, wrote from a site he called “las orillas.” Like his Argentina, the orillas was located neither in Latin America or its colonizer, Europe. Las orillas was wholly his own creation, without borders, in a liminal space between city and country. “The imaginary space of the orillas appears little affected by immigration, by cultural and linguistic mix,” writes literary scholar Kate Jenckes. “At issue is, as always, the question of ‘Argentineness’ [argentinidad], a nature that permits and legitimates mixes: foundation of value and condition of valid (cultural) crossings.”

Here is an excerpt of Garcia Villa, the Filipino “comma poet” of late ’40s New York:

In Postmodernism and Consumer Society, the philosopher Frederic Jameson discusses his notion of the pastiche. Writing must “reinvent a picture of the past in its lived totality,” he explains. No longer can we merely be navel-gazers, relying and questioning, like Borges, on his own Argentinidad (or in your case—Filipinoness). No matter our solipsistic geo-political spaces. You rally, you cajole, you eat pork and drink whiskey with your Pinay prends to no avail.

Are you a writer without a country? Do you write what you know, or, as Borges and Garcia Villa located themselves, in a purely imagined place?

In your friend Gina’s novel, The Gun Dealer’s Daughter, winner of the PEN Open Book Award, the young Pinay narrator describes Manila in this way:

“Already you could see it—the tale of a different city beyond the bleakness of scheduled failure: we passed the blackouts of Manila’s streets, a regulated system of select disrepair.”

From Manila—that imaginary homeland—to the people themselves. Later, your friend’s description of Pinays:

“Ladies in Manila do not walk. I have never seen my mother, Reina Elena Soliman, the former Queenie Kierulf, cross a street.”

When your own mother left Manila in 1969 and landed in Des Moines, Iowa, with less than $100 in her pocketbook and the address of a Filipino acquaintance scribbled on the back of a notebook, she did more than cross a street. She crossed continents. She did this alone, leaving her husband, your father, and her six children behind.

“‘Who is Imelda?’ I come from a third-world country, third-class province. And I was orphaned—and look, Imelda made it. If Imelda made it everyone can make it. At this age and stage I feel so good I’m still ready to fly.”

The former first lady, referring to herself in the third person, in 2003.

Everyone knows that the Philippines is a matriarchal country. The indigenous gods were called babaylans: spiritual healers, community builders, mother figures.

“The babaylan in Filipino indigenous tradition is a person who is gifted to heal the spirit and the body,” writes Asian American scholar Leny Strobel, “a woman who serves the community through her role as a folk therapist, wisdom-keeper and philosopher; a woman who provides stability to the community’s social structure; a woman who can access the spirit realm and other states of consciousness and traffic easily in and out of these worlds; a woman who has vast knowledge of healing therapies.” 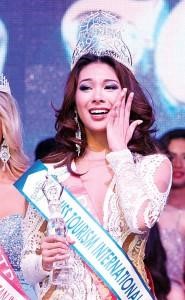 The babaylans were disrupted with the introduction of European and American colonialism. Our oral traditions, and the attendant emphasis on feeling, lost out to history, medicine, U.S. and Spanish soldiers. Yet, still: Filipino family units retain a strong sense of the matriarch; the president has frequently been a woman; and beauty pageants, with Pinays front and center, dominate Filipino culture.

Perhaps the most notorious political figure to emerge from the Philippines is the former first lady, renown on an international scale. She owned more than 1,220 pairs of shoes. She and her husband stole billions of dollars from the Philippine people. She is still alive, and for many years lived in Hawaii, protected by the U.S. government, before returning to the motherland and being elected Governor of Ilocos Norte. Her nickname is the Steel Butterfly.

In “A Heritage of Smallness,” Nick Joaquin, National Artist of the Philippines, writes: “We work more but make less. Why? Because we act on such a pygmy scale. Abroad they would think you mad if you went in a store and tried to buy just one stick of cigarette. They don’t operate on the scale.” You disagree with so much of it, not because of its untruths but because of its claustrophobic worldview (Eric Garner was trying to sell a single cigarette—the desire for small exchange is a universal one): because of how Joaquin gazes at his subject—the Filipino—with a punitive gaze, rather than a loving one. This, despite the fact that you see Filipinos in this same unkind way.

Your mother. The Filipina fictionistas. Your selfish writerly concerns.

The educated reader in America assumes that the hegemony of whiteness is fact. As writers we sometimes fight this assumption and produce works that speak to audiences with brown faces. Sometimes, but not always.

Being white is nothing to be proud of. At least for the seventeen-year-olds you teach. White man’s burden, the little brown brother, the master and the savage—all are new concepts, and all carry with them wisps of personal associations. Because of their youth (who rightly coined that cliché of wasting youth on . . . ?), they lack the intellectual objectivity, the gusto to ask critical questions, the discursive knowledge that your upperclassmen—who’ve already undertaken a slew of English and humanities courses—possess.

And so you pause outside the third-floor classroom in Carney Hall, briefcase in hand, armed with a grab bag of definitions. American Exceptionalism. Orientalism. Deconstruction and White Privilege. How might you communicate these theories adequately? Especially when there’s so much left to understand? You remind yourself, Take a deep breath. It’s only a survey class after all.

You open the door and walk to the front of the classroom, glimpsing thirty-odd students chatting with friends, texting (or sexting?) on iPhones, a few hardy souls with noses deep in the assigned novel in hopes of catching up on the day’s work.

You place your books on the lectern. You gaze out at the white and brown faces. “Let’s get started.” 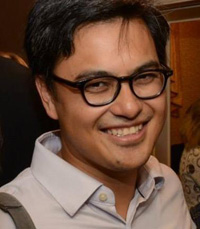 Ricco Villanueva Siasoco has published in Joyland, Post Road, The North American Review, and numerous anthologies, including Walang Hiya (Carayan Press, 2010) and Screaming Monkeys (Coffee House Press, 2003). In 2013, he was selected as a NYC Emerging Writer Fellow at The Center for Fiction. Siasoco received his MFA from the Bennington Writing Seminars and taught writing at Boston College. He is completing a PhD in English education from Teachers College, Columbia University, and finishing a novel. (updated 5/2016)