Eleven days before my fifty-third birthday, I find myself (find myself? more like, worried about losing myself) on an American Eagle Embraer 145, bound from Shreveport, Louisiana to Dallas, Texas, caught in the rising dewy air of an August Sunday morning. Short flight, thirty-eight minutes gate-to-gate,our flight attendant Marsha tells us, and I am exactly in the middle of the plane, aisle seat atop the wing construction, sky smooth as water in a wading pool. Not that any of this matters; I feel tense as always, constricted: not my usual fear of flying (although that, too) but something more elusive, like the fabric of a dream. For years-twenty-five, at least-I have avoided American Eagle, flown out of my way, to other cities, to keep from traveling on its planes. I have held it out as an anti-talisman, symbol of the depths of my superstition, a promise or a whisper or none of the above. The reason? When I was in my twenties and living in Manhattan, I dreamt I was on an American Eagle plane that crashed; I woke before the denouement, but I can still recall, still hear, the horrible screaming as we lurched from the sky. Ever since, I’ve lived with the conviction that to travel on that airline would be like signing my own death warrant, but since there are only a few ways to get in and out of Shreveport, what other choice do I have?

What other choice indeed since, whatever firewall I erect, death is out there, which means one day I will face what Stuart Dybek calls, in a story I just taught this morning, the obliteration that lurked at the center of each moment-moments I’d taken for granted. Obliteration, annihilation, the substance of my nightmares, which still wake me some nights crying Rae’s name, fully conscious beneath the mantle of the subconscious, aware that if I can get her to stir, she will pull me out, rescue me from myself. I’ve long believed in dreams as messages, going back to childhood, when I once dreamed I died. Don’t want to revisit those particulars, except to say the dream ended with me watching from above (flying, as if I were a ghost or, better yet, a guardian angel), as my parents drove along Easton Road in Westport, Connecticut, listening to the radio in their car report my demise.

I know, I know: Die in a dream, die in real life, or so the folk wisdom goes. I’m here to say the opposite is true. Same with my flight on American Eagle, which I realize, partway through, might offer the key, the decoding mechanism, I am looking for. My whole life, I’ve sought signs and symbols, told myself secret stories about the meaning of the world. I’ve invented rites and rituals, the details of which I am unwilling to go into, because of the belief (despite my better knowledge) that they might somehow keep me safe. At issue is a faith in order-or a fear of disorder so prevailing I create structure anywhere I can. I want to say my survival on this Sunday is a signifier: a loose end, an unraveling, a message about the true value of superstition and belief. Dream aside, I make it to Dallas, and then, a little later, to Los Angeles aboard an American Airlines 767 as wide as the house I live in, the same sort of plane that took the World Trade Center down. Here we see another kind of dream, another kind of nightmare, a nightmare of the end of time. Yass, yass, Neal Cassady might mumble, we know time . although there is no end of time, not really-only an end of time for us.

Am I making too much of nothing? Maybe so, but time is closing in. Five days from now, my birthday—another signifier, another sign. Fifty-three is a loaded number, forcing me to confront certain conditions I would rather leave alone. First is another nightmare, about my father, who I once dreamt would die at that age. I no longer recall the details, just that I awoke awash in memory and aftermath. The dream was so vivid I got out of bed to call him, his voice on the phone less comfort than warranty. This was in 1980, when my father was forty-three and I was eighteen, and even after he had reassured me, the fear, the sense that I had seen a harbinger, did not completely dissipate. For a decade, I carried the recollection like a seedpod, then spent his fifty-third year in a state of heightened animation; do I need to say how relieved I was when he turned fifty-four? Abbie Hoffman was fifty-three when he died, as was Jerry Garcia. Today, I read about Jay Adams, one of the original Z-Boy boarders, who went to bed early on Thursday because he wasn’t feeling well; the next morning, he, too, was dead at fifty-three. I don’t care much about skateboard culture, but I’m not feeling so great myself, and anyway, the older I get, the closer all this cuts. It is just absolutely utterly shocking that after all this shit we just, like, die! a friend tweeted the day I got home from Louisiana. I responded: Not so much shocking, I would say, as absurd.

Absurd, yes, my intellectual defense of last resort, but what about the loss and dissipation, the fact that we are all here to dissolve? I don’t have an answer, but I no longer want to look away. I want to step outside, to free myself. I want, like Kurt Vonnegut, to release my ghosts and in the process (maybe) release myself, embracing all I do not know. In the closing pages of Breakfast of Champions, Vonnegut tells Kilgore Trout, I am approaching my fiftieth birthday, Mr. Trout. I am cleansing and renewing myself for the very different sorts of years to come. Under similar spiritual conditions, Count Tolstoi freed his serfs. Thomas Jefferson freed his slaves. I am going to set at liberty all the literary characters who have served me so loyally during my writing career. I aspire to do the same. Not my characters**,** I don’t have characters, but these ideas and conceptions, these definitions, everything to which I’ve clung as a way to bestow meaning, to protect myself from the uncertainty of the world. Consciousness is chaos and life has no meaning; this I know if I know anything. The stories we tell-including the big ones: faith, statehood, family, history-are just a series of dreams we make up to give shape to the shapeless, to protect ourselves against the void. That it all falls to pieces is part of the point, although that’s easier to say than it is to feel. Kinehora, kinehora, kinehora, the old Jews intone, a strategy not to tempt fate, to ward off bad luck, like spitting on the ground. And yet, maybe the time to tempt fate has arrived. These dreams, these intimations . what do they mean if they don’t come true? My father is still living, for the moment. And, for the moment, so am I.

I remember, a decade or so ago, reading that it is in our fifties when we finally come to terms. This was in a novel called Sudden Rain, written by a Midwesterner-turned-Angeleno named Maritta Wolff. It offers a social panorama of Southern California, circa 1972, that unfolds across a long November weekend, Santa Ana winds and wildfires charging the atmosphere like a teaser for the end of the world. In 1975, after a dispute with her editor, Wolff withdrew the manuscript from publication. Out of resistance, or resignation, she boxed it up and stashed it in her refrigerator, where it remained until she died in 2002. She was fifty-six at the time, three years older than I am now, and maybe she was tired. Or maybe she had hit the point, as I seem to have, where she no longer wanted to play along.

Either way, Wolff writes in Sudden Rain with a nod-your-head authority about the slippery transition from the forties to the fifties, the northern edge of youth to the southern edge of middle age. The forties, she declares, are terrible years. Think about it. We turn in on ourselves again. That’s when we come face-to-face with our own mortality. Old age and death! That’s when we all go into panics over things we wanted out of life and haven’t got. The trauma years. We all go a little mad in our forties. As for the fifties, [t]hese really are the golden years. We’ve come out the far side of the forties with the wisdom to know that just life itself is the greatest gift of all. That every day is something extraordinary, not yesterday or tomorrow but today, to be lived from morning till night, to be savored and enjoyed. It’s a lovely sentiment, although I have to wonder how Wolff reconciled that ideal of acceptance with her refusal to release the book. Maybe she didn’t; as F. Scott Fitzgerald once observed, It is in the thirties that we want friends. In the forties we know they won’t save us any more than love did.

Fitzgerald is right: Nothing will save us, and time is not on our side. But I want to believe in Wolff’s equanimity also-even, or especially, if she couldn’t believe in it herself. I keep thinking of David Wyatt’s Five Fires: Race, Catastrophe, and the Shaping of California, with its account of San Francisco after the 1906 earthquake. The particular story that San Francisco told itself about the earthquake and fire, Wyatt explains, was of a city coolly eyeing its own destruction, a city acting ‘casual,’ as Kathryn Hulme describes a man blowing drifting char from his hands, ‘casual when you knew he wasn’t feeling so.’ I once used that line to describe the peculiar conundrum of living in California; now, I imagine it in more existential terms. What else are we doing, as we move through days and weeks towards our inevitable denouement, if not affecting a casuality, a nonchalance? What are we doing if not blowing drifting char from our hands? These days, I often find myself making such a gesture: brushing my palms against each other, once, twice, three times, as if to push off the doubt. Or no, not the doubt, the worry; it’s the doubt, the unknowing, I mean to embrace. We know nothing of the future, or even of the present, know nothing of what will happen in the next instant, even now. Obliteration lurks at the center of every moment, and there is nothing we can take for granted, not even the surety of our next breath. I know this, but do I really? How can I, when I don’t believe, in some essential fashion, in my death? It’s still an abstraction, a thought experiment, of the mind and not the body. Why else cling to all those touchstones, superstitions, amulets?

After my American Eagle flight landed in Dallas, I made my way through the airport to the departure gate for Los Angeles. I did not know what was going to happen, whether the 767 would arrive safely, or if we would do a barrel roll over, say, the Arizona desert and begin a sustained plunging towards the ground. I had no choice but to give over to the moment, to forgo not only expectation but also fear. Did it work? Yes and no. Which is, I suppose, the best we have to hope for, in a world where even the most basic truths (how I distrust that word) remain unclear. 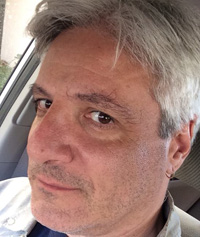 David L. Ulin is the author, most recently, of the novella Labyrinth. His other books include The Lost Art of Reading: Why Books Matter in a Distracted Time and the Library of America’s Writing Los Angeles: A Literary Anthology, which won a California Book Award. He is book critic of The Los Angeles Times. (updated 2/2015)