The end of my marriage in 1981 coincided with the one-week West Coast premiere of Vera Chyilovna’s masterpiece Daisies at the Bijou Cinema. My husband at the time was part owner of the Bijou, a small repertory house in San Francisco, which changed its double and triple features of classics, independents, and foreign films several times a week. The Bijou is where I first saw The Seventh Seal, Amarcord, Casablanca, Eraserhead, and_ Daisies _(three times in a row, opening night). My husband booked the films and managed the box office, while I sold popcorn and soda at our small and sticky concession stand. I enjoyed my job, thanks mostly to our passionate moviegoing clientele, but the husband/boss dynamic stank. As the Bijou business prospered, our attention to domestic affairs declined; and my husband and I spent the endgame of our marriage quarreling over who should clean and who should cook and who should empty the trash. Beneath these banalities was a mutual panic that made me understand murderers.

I’d never before seen women on screen like those in Daisies: two anti-authoritarian anti-heroines, both named Marie, slumming around ’60s Prague like punk Isadora Duncans. “We’re spoiled!” they sing, meaning not so much indulged as decayed. They sleep late, skip work, tease men mercilessly, and they’re almost always eating something sweet. The only elder’s voice they countenance comes from a sentimental ladies’ room attendant, who suggests they drink some coffee. When she briefly leaves to fetch them sugar (they can’t do a scene without sugar), they steal her tips. At the height of their naughty adventures the Maries discover a banquet impeccably set out (perhaps for Communist Party fat cats) and wreck it. Hungry and rebellious, they dance on the table, gorge, foment a food fight (cream cakes!), swing from the chandeliers, then fall from an upper story into the ocean—punished, as the Czech dissidents would be, for their daring and disrespect.

In 1966, Daisies was banned by government censors on its completion. The Czech National Assembly denounced the film for its avant-garde style and anti-authoritarian attitude. Twenty-one deputies signed a letter accusing Chytilova, a state-employed filmmaker, of wasting public money, illustrating wanton food waste, and championing a “road” upon which no “honest worker, farmer, or intellectual would like to embark.” The politicians demanded to know how long Chytilova and others of her ilk would continue to “poison the life of working people,” and demanded that Daisies be censored as a warning to filmmakers to “take their duties more seriously in the future.”

Daisies was eventually released in 1967, just months before the tanks rolled in to crush the Prague Spring. The Soviets were hardly less welcoming to Chytilova’s particular genius. After multiple run-ins with dangerous and antagonistic film functionaries, she was investigated by a Competency Assessment Commission, which determined that she had a “bad attitude toward work” and might be employed as a film director only “if she behaved humbly and kept quiet.” It wasn’t until 1976 that Chytilovna would work again as a director in the Czech film industry, and then only after taking her appeal directly to Czechoslavakia’s president, Gustav Husak. In her letter to the president, Chytilovna offered an assessment of Daisies as a morality play that shows how the roots of “evil” may lie in the “malicious pranks” of everyday life. Her two heroines are artists, thwarted in their need for fulfillment, who turn their creative energy “into its very opposite.” As an artist, Chytilovna surely felt thwarted and conspired against. Her letter described how the two Maries are punished, but not why they are sacrificed, which for any thinking viewer is self-evident. They’re rebellious girls. However edifying the filmmaker’s exegesis (an audacious act of professional expediency, film scholar Jonathan Owen calls it), for her two Maries on screen, subversion is bliss. They don’t give a hoot about having a positive attitude toward socialism, nor do they care much for a worker, farmer, or intellectual unless he’s providing a meal.

In the early ’80s, once a film’s run ended there was no knowing when it might return. This was years before personal VCRs made films readily available.  I wanted the Bijou to extend Daisies’s run, but our copy, the only one west of the Mississippi, had already been promised to another cinema in another town. After the final show, I went to the close, hot, smoky booth (no smoking was allowed nearby because of the danger to celluloid, but everyone smoked) to watch as our projectionist packed Daisies’s two 35 mm reels into their heavy steel shipping cases for transfer the next morning. It felt like a funeral.

Early in our six-year marriage I’d longed to have a child, but nothing worked. In the summer before Daisies, I underwent surgery to try to improve my chances, and afterward recuperated at home in our spare room, empty of everything but a futon and an old TV. As I lay in bed that first week, watching a public-television marathon of the British soap opera Wings (in which heroic WWI aviators pursued selfless nurses, then died one after the other in fiery crashes), I alternated between tearful and fiery railing against my own fate. I was nearly thirty years old, with a failing marriage and a dead-end job.

That was the summer when the world was absorbed by Diana Spencer’s marriage to Charles. Every commercial station was punctuated with coming attractions. (Shy Di, who was she under those lashes?) We knew she was intact, or so the finest Harley Street physicians reported. And we heard she was in love. Lady Diana was the fairy queen. A woman may wish for many things—love, genius, health, beauty, esteem, privilege, children—but it is rare the package comes with a crown. I cursed her. I wanted to leave my husband, and I wanted to have children with him. (How could I know that would become Diana’s conundrum too?) That summer, he and I still shared a house, a bed, and, once I was back on my feet, a place of employment. I didn’t get pregnant and eventually, resignedly, returned to the concession stand. Then Daisies came to town.

One late night, during Daisies’s two-week run, after locking up the theater, sharing a bottle of wine, and sniffing the cocaine that was so prevalent in 1980s San Francisco, my husband and I again began criticizing one another at the top of our lungs. I accused him of stealing from the theater till. He denied it. I said I knew he was cheating on me. He said I was crazy. He may or may not have known I was as guilty of adultery as he was. In any case, that night I confessed. I’d gone to a hot tub club with a man who wanted to be poet. I’d been writing letters to an old boyfriend I loved more. My husband said he didn’t care, but his indifference was not the cold kind. He told me to shut up and stop bothering him and stop questioning him and get out of his space. He shook my shoulders and pushed me, hard enough for me to fall and slide across the hardwood floor.

I’d never been manhandled before. There’d been no physical violence in my childhood. When I was nineteen, a policeman had clobbered me in the head at an anti-Vietnam War protest. Then, there’d been blood and stitches, and I’d displayed my scar proudly. Nothing in my life had prepared me for being flung across a room. First I screamed from surprise, then crumpled; and afterward, for long seconds, we both waited, paralyzed. I believe he’d surprised himself.  He didn’t approach, and I had no impulse to run at him with nails out. All of the roaring in the ears, the seeing of red, the passion for vengeance came later, and I don’t think any of that ever really went away.

Our upstairs neighbors banged on the door, calling my name.

The neighbors called, “We know you’re in there, we heard you!”

I stood up wobbly and ashamed. My husband joined me at the door. He draped his arm around my shoulder. I let him.

“Are you all right?” the upstairs neighbors asked. I wouldn’t say.

“Tell them you’re all right.” My husband pinched my shoulder. It looked like he was clasping me protectively.  I wouldn’t say. I wouldn’t say he hurt me and I wouldn’t say I was all right; so we all sighed heavily, each for our own reasons, until my neighbors withdrew, impatient with me, warning him that next time they’d call the police.

By the end of Daisies’s run, my husband had left. He’d moved out or I’d kicked him out, does it matter now? I know that after that last show, after seeing the reels packed into their canisters, I went home, alone and full of fury to a filthy apartment which I had refused _on principle _to clean up after him. Our quarrels had fused finally into an endless cycle of harangues about “what was fair.” And so it was to this abandoned battleground that I returned to plot how I’d steal the only copy of Daisies west of the Mississippi. In the kitchen stood the trashcan, fetid symbol of our misery, billowing with the trash my slovenly husband had neglected to empty. What had happened to our revolutionary ideals about fair division of labor and a new world of equality that would begin at home? He’d fallen for status and rank, become a boss; so it wasn’t just me he’d betrayed. I can’t claim to have picked up _Daisies’_s undercurrent of art thwarted and artists unfulfilled. More likely I was disgusted by the rancid smell, the littered space, and my own passivity. What I planned wouldn’t correct the world’s flaws, but sometimes galvanization must be its own reward. I’d thought myself liberated before I married, but it had positively been me standing there mute before my disappointed neighbors.

That night, inspired by anger and the movies, I snapped the lid on the overflowing trash bucket and around two a.m. dragged it with me as I waited to catch the night-owl bus back to the empty theater. I felt quiet and neat and thrillingly focused as I hauled our kitchen garbage upstairs to the projectionist’s booth, where my husband also had an office desk. And there, on the catalogs and forms and mysteries of business, I dumped the trash in the spirit of Daisies. (Afterward, he changed the locks on the theater doors, in the spirit of the Czech Assembly’s twenty-one deputies.)

While upstairs, I rummaged in the projection room for the two canisters, but I couldn’t find them. Maybe he’d already hidden them, out of spite._ What did I want with them?_ Perhaps I imagined them mine by natural right. Wasn’t I still a young working-class person whose lack of control threatened the status quo? Even without a screen or projector at my disposal, I thought I could show the film better anywhere. It might take years, I plotted, but eventually I’d find that film and take it on the road. I’d crisscross America, showing Daisies in church halls and baseball fields and at covered-dish suppers and during swap meets. I’d show it in the parking lots behind dilapidated malls, and in libraries. And whenever Daisies came to town (I could only hope), daring and disrespect would follow. 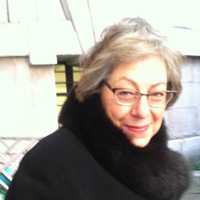 Leslie Brody’s books include Red Star Sister, which won a PEN Center USA award; A Motel of the Mind (written with Gary Amdahl); and Irrepressible: The Life and Times of Jessica Mitford. Her new biography of Louise Fitzhugh, the author of Harriet the Spy, will be out in 2020. Born in the Bronx, she lives in Southern California and teaches at the University of Redlands. (updated 4/2017)