My poem “Montage with Mangos” (AGNI Issue 83) began after watching the Odessa Steps scene in Battleship Potemkin (1925) for the first time. Battleship is Sergei Eisentein’s most well-known film and it embodies the newly theorized Theory of Montage, penned by Einsentein’s teacher, Lev Kuleshov. After watching it, I was struck by the emotion created by the juxtaposition of images to the point that I had to write a poem.

After the first draft of “Montage with Mangoes,” I researched the “Theory of Montage,” and walked away with many gems, particularly this one: Lev Kuleshov believed that film could transcend space and time. Kuleshov was one of the first directors to juxtapose images/scenes of different physical places, far away countries, etc., in order to create an emotional response. ¿Isn’t that what immigration does? The montage, in a way, can be viewed as the first depiction of the hurt immigrating creates. It’s the reason why time and space in my poem may seem confusing, or juxtaposed. I wanted to narrow the gap between my parents’ ages when they left (Dad, 20, and Mom, 24) and my own (26). I’m older than they were when they left. We all haven’t returned to what we left. That land has changed, the friends we know have grown, died, or left; the only way we can possibly return to what we left behind is through our memories.

The Odessa Steps scene begins with foods being unloaded from sailboats; this image reminded me of the fishing boats that would unload at our town’s pier. Their merchandise was later transported to El Mercado at the center of town. Mom would walk there almost every afternoon, I was stuck to her hand, everyone knew us. When she left for this country, I walked with Abuelita. This image of the market, of geese, pigs, eggs, bought and passed around, was edited out of my poem’s later drafts. What remained was the image of preparing flor de izote in order to cook them with scrambled eggs one rainy afternoon when two-foot deep water surrounded our house.

Since flor de izote is also the Salvadoran national flower, there’s room for interpretation of what the “plucking” means. Friends have told me that the flowers could be viewed as immigrants plucked from their homes and thrown into “the bowl.” Subconsciously, maybe it’s why I wrote the poem after watching _Battleship—_the crowd is fleeing the soldiers, the oppression of the Czar, fleeing from war. The poem’s form was also borrowed from the stampede. I wondered how I could recreate the force and speed with which Einsentein’s scene moves toward the end: the motion of the soldiers descending the steps, paused by short images of boots stepping on hands, faces, etc. One way I tried to recreate that method was by using long sentences, with short sentences in between.

To Russian filmmakers, the film didn’t begin with the shooting of reels. It was born through the editing, through the assembling. There’s a longing for time, there’s a longing for space in “Montage with Mangos” and all of my poetry, but these distances can be mended through editing, through cut and paste. I hope, through the act of writing, to reassemble the pieces of my childhood, my country, that were shattered by the act of migrating. 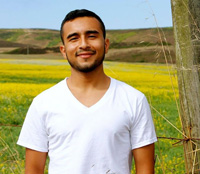 Javier Zamora was born in El Salvador and migrated to the U.S. when he was nine. A winner of the Barnes & Noble Writer for Writer’s Award, he has received fellowships from CantoMundo, Colgate University, the MacDowell Colony, the NEA, and Yaddo. His poems appear or are forthcoming in The American Poetry Review, Ploughshares, Poetry, AGNI, The Kenyon Review, and elsewhere. (updated 4/2016)