An artist needs a problem he can’t solve. The lucky ones get into a problem that is unsolvable, so they keep going and there’s a growth, evolution. —Philip Pearlstein

As a writer, I more or less live by Philip Pearlstein’s philosophy. It’s not even intentional; it’s just that I only seem to be interested in trying to write things I don’t know how to write. The hope is that, by the end of whatever project I’m working on, I will have figured it out while also having learned something new. But sometimes even if the project comes out all right, I end up no wiser than before. That’s what it’s been like working in the weird form known as the novel-in-stories.

It’s kind of an oxymoron, the novel-in-stories. On the one hand, its chapters are supposed to function as stand-alone short stories, which means that, when you reach the end of any of them, you should feel a sense of closure—a sense that the experience is complete, that you don’t need anything more. On the other hand, those same stories are supposed to function as novel chapters, which means that, when you finish reading one, you should feel that the experience isn’t really complete and that you need to keep reading—that you need to finish the entire book in order to reach closure.

Faced with this paradox, most authors seem to choose stories over chapters, or vice versa, rather than trying to preserve a sense of both.

Take Jennifer Egan’s A Visit from the Goon Squad, which people often point to when I ask them to name a favorite novel-in-stories. It’s a great book, but, in my opinion, its parts function more as stories than chapters. Even though two of the characters—Bennie and Sasha—have, between them, connections to all the other characters, the others are often disconnected from one another, making the connections in the book feel fairly loose. The same dynamic recurs in the plot: any two stories might share a plot thread, but the same thread might not be picked up anywhere else. And although a theme develops across the book, no plot line unfolds from cover to cover. In my read, Goon Squad is an excellent collection of interconnected stories, but not a novel-in-stories.

Or, looking in the other direction, take my case. My own recent novel How to Mars—about an absurd space mission and humanity’s first pregnancy on another planet—was meant to be a novel-in-stories. I think it does part of what a novel-in-stories is meant to do: the same characters remain at the center throughout, and, although the book isn’t entirely chronological, there is  a plot arc, beginning with the discovery of the pregnancy and ending with that pregnancy’s outcome. Along the way, the characters develop and change and grow, largely in relation to that central set of events. So I do think it’s a novel. But is it a novel_-in-stories_?

When I started out, the chapters were meant to be stories. Ideally none of them would require the others, and each would deliver a complete experience. But once I had a full draft, my first readers felt there was too much repetition. And there was. Since none of the chapters were supposed to need the others, I’d reintroduced crucial information at the beginning of each. As a concession to the novel form, I removed many of those redundancies, which made it much less likely that the chapters could stand as separate, independent units.

I also got feedback that the book felt disjointed at times. And why shouldn’t it, if each part was designed to be complete unto itself? I wrote a few additional chapters that couldn’t stand by themselves but which added important connective tissue.

In sum, How to Mars became more a traditional novel than I’d intended, its story-parts having turned into chapters.

Some authors who set out to write novels-in-stories end up writing story collections that are a little novelistic. Others end up writing novels, some chapters of which feel like interconnected stories. There’s nothing wrong with either of these; it’s just that I’m particularly interested in the true novel-in-stories because its paradox is such an exciting thing to see resolved.

Allegra Goodman’s The Family Markowitz is to me the paradigmatic example. This exploration of a family—a group of distinct but deeply interdependent people—is written in connected chapters that could each be lifted out of the book and read on their own. Indeed, many of them have been anthologized as stand-alone pieces. When I assign one to students, they never say, “Hey—where’s the rest of it?”

And yet, Goodman’s book is also a novel. Chapter after chapter, the focus shifts from one character to the next, but, unlike in Goon Squad, most of the chapters also prominently feature other characters from the book. Furthermore, Goodman devotes several stories to the group of characters as a whole, bringing the family back together for deaths, holidays, and weddings. The family—not any individual character—turns out to be the book’s protagonist, and it’s across all those family events that the protagonist changes and grows.

How does Goodman write sections that feel complete while also drawing us onward? She does it partly with compelling writing and characterization; you read a little Goodman, you want to read more. And when she reintroduces information from earlier chapters, she does so quickly and quietly. But she also pulls it off by moving between the family and the individual. The first chapter dislocates the matriarch when her husband dies, and that shift upends the family. Chapters that focus on one character are able to introduce and then bring to a close new complexities of that character’s life and psyche—they can’t, however, resolve the issues facing the family as a whole. Over the entire thing a question hovers: Will this family come back together? That question pulls us forward even as individual characters’ journeys resolve in individual chapters.

In some sense, this discovery is an unsatisfying place to land. My chance of mastering the form doesn’t feel any greater after learning that Allegra Goodman—one of the best examples I know of an author who makes hard things look easy—is able to pull it off. But still—finding a unicorn means unicorns are possible. It makes me want to keep trying. And if I don’t solve the novel-in-stories for myself? Well, at least Philip Pearlstein considers me lucky. 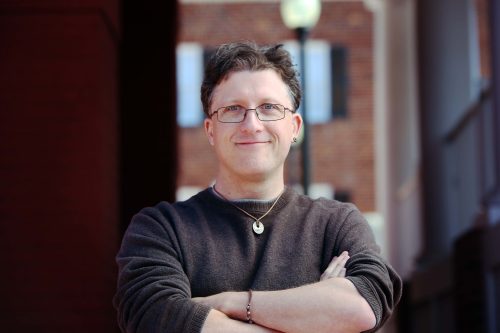