I write two different kinds of “lyrics”: the kind that gets printed in the pages of books and literary magazines, and the kind that gets pressed into hot thin circles of vinyl. My books include companion albums of original music that dovetail with the printed texts, and my live performances similarly include a combination of poems and songs. It puts me in a position to observe, daily, the disjointed relationship between “the lyric” as it’s understood in poetry-speak and “the lyric” as it’s understood in music-speak.

For most of Western history—from bards singing The Iliad and The Odyssey, to French troubadours, to Shakespearean sonnets, to Dickinson’s ballad stanzas—there was little distinction between a poem and a song; the word “lyric” referred to both, whether the words were spoken, printed or sung. But somewhere in the last hundred years or so, a rift must have opened up between these understandings of “the lyric”—because the kind that appears on the radio no longer bears much resemblance to the kind that appears on the page.

The AGNI blog proved conclusively that poetry is still alive, which is great news—but if there were a popularity contest between this lyric and that lyric, I’m afraid the song version would win by a landslide. I find it amazing—and a tiny bit baffling—that mainstream audiences embrace song lyricists (even dense, challenging, “literary” lyricists like Talib Kweli or Joanna Newsom) so voraciously, while most modern masters of the poetic lyric spend their careers largely unread by anyone outside our sphere of fellow poets.

So I always find myself asking… Why? Why is music a constant backdrop to modern life in America, a soundtrack to every relationship, party, advertisement, movie, road trip, and memory, while poetry inhabits the hearts of only a select few? Why does music get dubbed the “universal language,” while poetry gets dubbed “pretentious,” “obsolete,” or “dead”?

Another confounding piece of this puzzle is that, if you believe the history books, poetry used to be wildly popular in America. It once enjoyed the widespread appeal that music does in our current cultural milieu. So what was different, one and two and three (and, elsewhere, ten) centuries ago, that allowed poetry to thrive as a mainstream art form?

This morning I came up with a very counterintuitive answer: illiteracy.

For the majority of poetry’s existence, its “readership” wouldn’t have been reading poems at all. Instead, they would have been hearing read them out loud—not necessarily by the poet her- or himself, but by someone else speaking the piece. I would guess that the poets of this bygone era, understanding that the primary conduit between their own ideas and their readers’ minds would be the vibrations of language in the air rather than letters on the printed page, would have taken this delivery method into consideration as they approached their craft.

In other words, these poets would have been writing for performance. They would have used meter and rhyme not only for the pleasing sonic character of these techniques, but also to signal to listeners—aurally—that a stanza had ended. They would have used repetition as a means of ensuring that listeners grasped the main concepts and themes of a poem, even without the luxury of slowing down during dense passages or rereading challenging lines. And they would have included all the necessary connective tissue to carry a listener through a narrative or argument, knowing that if the audience lost the poem’s thread, they would have no way to regain it. Formalism, then, wasn’t merely an aesthetic preference of the era; it was a structural necessity, given poetry’s distribution system at the time.

As those distribution methods changed—as literacy became more commonplace, and as a greater percentage of poetry’s audience began to digest poems in printed form—its practitioners adapted accordingly. It’s now perfectly effective to use fragmentary grammar, visual arrangements of text and white space, aggressive enjambments, and other page-reliant formal techniques, with the assumption that readers will be interacting with the text silently, in print, at their own pace.

The only drawback, as I see it, is that poets were—and are—no longer writing for performance. (This could explain why so many poetry readings, even those by exceptional poets, are stone-cold terrible.) During the compositional process, it becomes easier to forget the audience’s temporal needs, expectations, and experiences of the work—which, in turn, leads to a widespread perception of poetry as being hermetic or solipsistic (or “obsolete” or “dead.”) 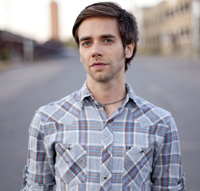 Brian Laidlaw is a poet and troubadour from Northern California. His work has appeared in New American Writing, The Iowa Review, Handsome, AGNI, Volt, and American Songwriter Magazine. He is the author of two hybrid poetry collections: Amoratorium (Paper Darts Press, 2014) and The Stuntman (Milkweed Editions, 2015), each of which includes a companion album of original music. (updated 4/2016)