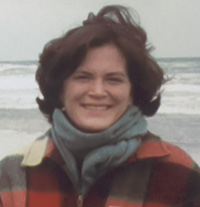 Rachel Dilworth is an American poet. Her first manuscript, The Wild Rose Asylum: Poems of the Magdalen Laundries of Ireland, was chosen by Rita Dove as the winner of the 2008 Akron Poetry Prize. It will be published by the University of Akron Press in 2009. Her poems are forthcoming in American Literary Review, Chautauqua, and Southern Indiana Review, and have appeared in TriQuarterly, Spoon River Poetry Review, Perihelion, CutThroat, and elsewhere. She has received, among other awards, a Fulbright Fellowship to Ireland, Yale’s Clapp Fellowship for poetry, commendation in the UK National Poetry Competition, and a Bread Loaf “Waiter” Scholarship. (updated 10/2008)

Poetry
Marlon Brando Considers His Sex Appeal, in Glorious Black and White
By Rachel Dilworth
Poetry
Online 2008
Back to top