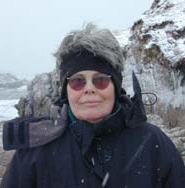 Pamela Alexander is the author of four collections of poetry, most recently Slow Fire (Ausable, 2007). Her other books are Inland (1997), which won an Iowa Poetry Prize; Commonwealth of Wings (Wesleyan, 1991); and Navigable Waterways (1984), which won a Yale Younger Poet award. Alexander has received two fellowships from the Fine Arts Work Center in Massachusetts, as well as fellowships from the Bunting Institute of Radcliffe College and the Ohio Arts Council.

Her work has appeared in numerous anthologies, including American Alphabets, Best American Poetry 2000, The Extraordinary Tide, American Voices, Poetry for a Small Planet, and Cape Discovery, and in many periodicals, including AGNI, The New Yorker, The Atlantic Monthly, The Boston Book Review, Orion, TriQuarterly, Poetry, The Journal, The New Republic, and The American Scholar. (updated 10/2008)