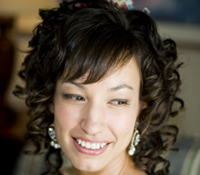 Marie Mutsuki Mockett was born in Carmel, California, to a Japanese mother and an American father. She graduated from Columbia University with a degree in East Asian studies. Her work has been published in numerous journals, including LIT, Epoch, North Dakota Quarterly, AGNI, and Phoebe. She is also a frequent contributor to Japundit, the Japanese news and culture site. Her debut novel, Picking Bones from Ash, will be released by Graywolf Press in fall 2009. She lives in New York City. (updated 10/2008)

Her AGNI essay “Letter from a Japanese Crematorium” was chosen for The Best Creative Nonfiction 2009.