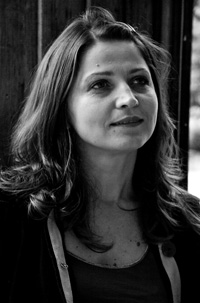 Winner of the Albanian National Silver Pen Prize in 2000 and the International Kristal Vilenica Prize in 2009, Luljeta Lleshanaku has published six books of poetry in Albanian. She is also the author of six collections in other languages, including Antipastoral, 2006 (Italy), Kinder der natur, 2010 (Austria), and Dzieci natury, 2011 (Poland). Haywire: New & Selected Poems (Bloodaxe Books, 2011), a finalist for the 2013 Popescu Prize (formerly the European Poetry Translation Prize) given by The Poetry Society, UK, is her first British publication and includes work from two editions published in the U.S. by New Directions: Fresco: Selected Poems (2002), which drew on collections published in Albania from 1992 to 1999, and Child of Nature (2010), a book of translations of later poems that was a finalist for the 2011 Best Translated Book Award. Lleshanaku was also nominated for the European poetry prize “The European Poet of Freedom, 2012,” in Poland. (updated 6/2014)