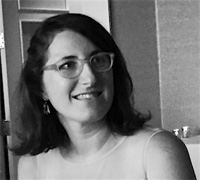 Lucy Biederman’s book, The Walmart Book of the Dead, won the Vine Leaves Press Vignette Award and will be published in December 2017. Her poems, stories, and essays have recently appeared in Conjunctions, AGNI, Bat City Review, and Ploughshares. Her scholarly articles have appeared in The Henry James Review, Women’s Studies, and Studies in the Literary Imagination. She lives in Cleveland, where she is a lecturer in English at Case Western Reserve University (updated 10/2017)