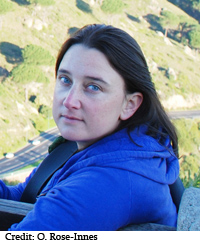 Henrietta Rose-Innes is a South African novelist and short-story writer. She has recently published a collection of short stories, Homing (Umuzi, 2010), and is the author of two novels: Shark’s Egg (Kwela, 2000) and The Rock Alphabet (Kwela, 2004). In 2008 she won the Caine Prize for African Writing, and in 2007 received the South African PEN Short Story Award. Her work has appeared in Granta, AGNI, and in various international anthologies. Dream Homes (merz&solitude, 2008), a collection of short pieces, appeared in German translation in 2008. She lives in Cape Town. (updated 10/2010)

Her AGNI story “Homing” was reprinted in The Best American Nonrequired Reading 2011.