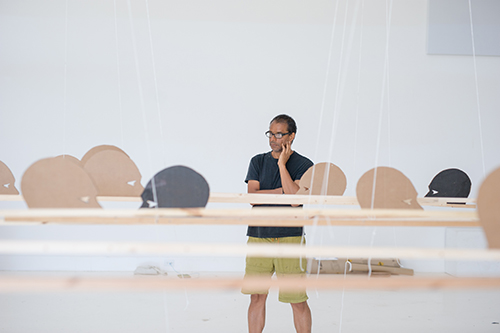 Christopher Cozier is a Trinidadian visual artist whose mediums range from notebook drawings to video installations. His exhibitions include “Infinite Island” at The Brooklyn Museum (2007), “Afro Modern: Journeys through the Black Atlantic” at Tate Liverpool (2010), “Entanglements” at the Broad Museum, Michigan (2015), “Relational Undercurrents” at MOLAA, LA (2017), and “The Sea is History,” at the Historisk museum, Oslo (2019). Cozier participated in the public program of the tenth Berlin Biennial and has exhibited in the fifth and seventh Havana Biennials and the fourteenth Sharjah Biennial (UAE). Later this year he will participate in the Liverpool Biennial and in “one month after being known in that island” at the Kulturstiftung Basel H. Geiger. Codirector of Alice Yard and a Prince Claus Award laureate, he lives and works in Trinidad. (updated 10/2022)