Why is female suffering so often necessary for the sake of art? What is the function of art in the wake of suffering?

In Nightingale, her sixth collection of poems, Paisley Rekdal offers some answers through poems that modernize myth. These poems are accompanied by a comprehensive gloss of the poet’s interior workings, the elements of process usually left to readers’ speculation or gleaned from materials found outside the text. Rekdal’s notes, drafts, memories, and research become this collection’s essential inner lining. Throughout Nightingale, Rekdal shows us that any text can become a mutual creation between the writer and the reader when aspects of their experience overlap.

Rekdal uses the ekphrastic poem as a catalyst for this discussion among the artist, the work itself, and the reader. In the collection’s second poem, “Knitted Thylacine,” the speaker begins to describe an intricately knitted version of the extinct marsupial, but then turns to the women who made it, noting that initially the knitting was done out of need—until it wasn’t: “until this work turned from necessity // to art.” Art emerges from the act of re-creation, yet the speaker further observes that these art objects cannot fully replicate the thylacine: certain aspects of the animal are lost in the translation between living creature and yarn. “[Y]ou can’t knit the jaw,” the speaker tells us, “that unhinges like a book / with a broken spine.” The struggle to replicate through art is a theme throughout the collection. And while perfect replication may be impossible, the attempt itself becomes the central point.

Rekdal’s focus on art and replication continues with “Four Marys.” This poem, first published in AGNI, opens with the speaker’s meditation on a fifteenth-century painting by Piero della Francesca, but soon a more burning concern about Mary’s expression takes precedence: “Even if I did not believe / in Mary’s joy, I would believe in her pain.” The speaker envisions Mary as a village girl facing the prospect that she or her child may die in childbirth. This juxtaposing of an iconic painting of Mary against the more accessible vision of a suffering girl is designed to pose questions: Why do ancient stories, whose age and familiarity often obscure the real hardships they depict, nevertheless hold so much weight? Why do we keep on resurrecting the classical, the Biblical, and the canonical into our present lives and art? Nightingale answers by finding the human within the mythic, which initially feels abstracted from lived experience.

The poem “Io,” another striking retelling, gives a moving portrait of a woman’s transformation. Rather than being supernaturally transformed into a heifer by Zeus to avoid Hera’s wrath, as in the original myth, this woman becomes quadriplegic after a bicycle accident. She speaks to her lover, Jane, about her dilemma: “The horror, she tries to explain to Jane, is not / that she has changed but that she can’t change / entirely.” She occupies a space between her former and current self without being fully either or both. She wants only “what she’s always wanted: a whole self / without any sense of loss.” This insight into her inner life complicates her relationship with trauma, the body, and her resulting emotional scars as she tells her pain and frustration to the myth of the title. Her desires become Io’s to return to an unreachable before. Rekdal doesn’t allow easy answers, because there are none. And the myths, which never feel untimely or dated in these poems, don’t provide easy answers either.

In Nightingale, mythological women’s lives are fully realized, laced with traumas that hold sway throughout their lives. At the center of the collection, “Nightingale: A Gloss” follows the poem “Philomena:” a modern retelling of the myth of Philomena, who, after being raped and mutilated by her sister’s husband, Tereus, conspires with her sister Procne to serve his son as a meal. When Tereus discovers their treachery, he attempts to murder Philomena and her sister, but instead the pair are transformed into a swallow and nightingale. In Rekdal’s “Philomena,” the modern Philomena’s grandmother bequeaths her estate to a cousin, who is a sculptor, and gives only her sewing machine to Philomena. When Philomena visits the cousin, her latest sculpture titled Persephone at first appears to be a “tree blasted by lightning.” Gradually Philomena realizes that the tree depicts a man attacking a girl “with shredded / bark for breasts and dark, charred wood / for legs, as if the limbs had been snatched / from a fire while burning.” The figures are barely legible in the texture; the sculpture’s style obfuscates the violence. And although the bodies struggle, the girl’s and man’s faces are expressionless: “all the fear / and anger burned instead inside / their twisting bodies.” This modern Philomena then asks, “Was this why her cousin had been chosen, to make / what she’d had no words for?” This line gives the reader the only indication that something unspoken and more traumatic is happening underneath the poem’s surface, which Rekdal reveals more fully in the following gloss. While Philomena’s grandmother has given her the tool of the sewing machine to create her own art in response to her trauma, Philomena instead decides to stow the machine away, as her cousin has already captured her trauma through the sculpture.

Rekdal uses “Philomena” and the myth’s source material, primarily Ovid’s Metamorphoses, to unravel and demystify the choices made in the poem. In “Nightingale: A Gloss” she details why she left out or discarded elements of the myth. Rekdal’s gloss is far more than marginalia or even straightforward explanation: in it, she investigates the traumas of art-making and sexual violence and considers the role of poetry in attempting to articulate those traumas.

The gloss begins, “Language is the first site of loss and our first defense against it.” Rekdal explains she has rewritten the myth substantially: Philomena’s assault is not mentioned explicitly, her tongue is not cut, and the originally ensuing events—including Philomena and Procne’s transformation into a nightingale and swallow—do not happen here. “Such details would be unimaginable, I think,” she writes in defense of her choices. “Not because a contemporary reader can’t imagine them, but because the details are now too grotesque for her to want to.” With this acknowledgement, the reader is explicitly invited in as an active participant. Rekdal articulates the reader’s desire to understand Philomena despite her fictional existence. “There is no scream after the tongue is cut, but would we hear a cry?” Rekdal asks. “We cannot hear her. We want to, but she only exists in our imagination: an absent body that exists in the past or in an unforeseeable future.”

Rekdal notes that, in “Philomena,” the rape takes place off stage: “But the reader of myths knows what is left out: my silence, then, is not a revision but an invitation to imagine, to remember, this violence for yourself.” Rekdal enacts that remembering by interspersing fragmented memories of her own assault while hiking near Loch Ness. Her account moves forward in an explanatory, almost distanced mode until the violence begins. Then Rekdal attempts to deconstruct the moment: to speculate on herself and her assailant, as well as his friends who walked ahead, her decision not to call out to them. Even during this process, she concedes, “I know I am asking for something beyond the response of your own suffering, your awareness of my suffering. I don’t care what you know or how you feel. I want to go back in time, to an external before. I want you to give me what no one can give me.” Despite this direct address to the reader, Rekdal remains acutely aware that this desire can never be fulfilled, even if the reader is positioned, though reading Rekdal’s account, in the before of the trauma. However, one of the ways the victim can potentially reckon with such brutality, Rekdal notes, is “to look at that violence dispassionately in memory.”

Rekdal uses the opportunity afforded by this desire to implicate the very enterprise of poetry, which “strains to contain suffering. It suggests, but rarely achieves, the redress we desire.” For Rekdal, both writing and reading poetry are attempts to bring order to suffering.  The attempts may not succeed, but they’re nonetheless necessary and useful: “a poem’s chronology forces us to see repetition: lyric time is not progressive but fragmentary and recursive.”

Having control of the narrative is extremely important to Rekdal in Nightingale. “Only language,” she writes, “which orders time and gives experience shape and meaning, might control how violence is experienced. It gives back agency.” While seamlessly moving among academic prose, literary references (from Shakespeare to Keats to Ovid to Lowell), and her narrative of the assault, Rekdal enacts the very agency she invokes. She gives voice not only to Philomena—who when transformed into a female nightingale cannot sing (as only the male nightingale sings)—but also herself, as she reads her own text for us. This is scholarly writing-as-performance at its best: unafraid to bring in the bodily experience and its lasting effects and eager to show how that experience forever changes the way we write back to the history that preceded us.

Without ever directly asking the reader to do so, “Nightingale: A Gloss” prompts a re-reading of the collection’s earlier poems, and the poems that follow it are inevitably influenced. The poems could, as a result, become prefaces and afterwords to this central pillar; instead, they become even more necessary to the reader. The whys that exist behind every work of literature are made starkly visible in Nightingale.

An elegiac sonnet sequence in the collection’s latter half demonstrates Rekdal’s formal dexterity; it also examines how confronting the past directly can sometimes bring a deeper haunting rather than closure. In the fifteen untitled sonnets that comprise the poem “Gokstadt/Ganymede,” the speaker intimately addresses a departed “you_”_ in order to try to understand their relationship. Like many of the poems in Nightingale, the occasion of the long poem is an image, in this case a photograph. While looking at the “you” posing beside the Gokstadt—an ancient Viking ship unearthed at a burial site—the speaker thinks of “I” and “you” as slightly out of sync, both in time and in their past relationship. When the speaker recounts the “you” being assaulted by his cousin, the figure of Ganymede colors the reading: “You never told. Vowels dissolved inside the walls / of other vowels: a labyrinth of sound / from which a boy would have to spool / out thread to escape.” The speaker attempts to articulate the experience of sharing these secrets:

I lay claim
to your private history, and by doing so chain
you once more to my silence, my imagination
of your pain figured through my body, transforming
you to a self I might fathom.

As suggested in previous poems and the gloss, readers gain some understanding of the pain the “you” has experienced by transferring it—reading it—onto their own bodies, no matter how flawed the impulse. In the world of this collection, language will never fully embody or transfer everything the writer intends. Even the transformation of language across time changes how one can perceive the world. The sequence’s final sonnet focuses on the hieroglyphs carved into the Viking ship: “Their violence erased / by our disuse of such symbols, deadened / by the fact these words no longer represent us.” Rather than allowing for catharsis, time and distance complicate language and obscure experience by opening ever more gaps and fissures.

Rekdal reveals so much about artmaking, trauma, and the role of poetry through the gloss in this labyrinthine collection. But even with all of the puzzle pieces laid out and shuffled around, Nightingale resists any singular, easy reading. Rekdal’s imagined female reader, who knows bodily violence firsthand, must piece together her own feelings about language, memory, loss, and pain as she negotiates her relationship to these poems. 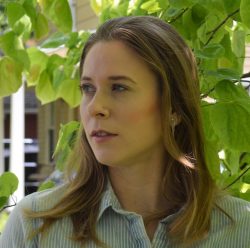