Much of what we readers of poetry recognize as poetry derives from the lyric tradition: the testimonial of the lone speaker. The lyric itself, as we well know, has its roots in the vates, the Greek orphic visionary. These models predate the differentiation we make in contemporary poetry between the author and the speaker, but it is interesting to note that the pretense of singularity within the voice of the speaker still adheres today. Whether we feel a poem is a confession deriving from a person (author) or a fabrication deriving from a persona (character), the unity of the “I” is supposedly something on which we can depend. There have been occasional abrogations of this contract—think for instance of the amorphous Ashbery pronoun or the vocal multiplicity of Berryman’s The Dream Songs—but these are exceptions that seem to prove the rule. If we are not presented with a downright lyric “I,” we at least demand a whiff of testimonial surety. Poetry that deviates from this sense of unity risks being dismissed as fragmentary, confused, or schizophrenic. But if, as Barthes convincingly claims, the text is a “tissue of citations, resulting from the thousand sources of culture” and the author’s “only power is to combine” these sources, then how can we continue to insist that the author’s stand-in, the persona, be unified? Thankfully, accomplished collections by two young poets—Nick Lantz’s We Don’t Know We Don’t Know (Graywolf, 2010) and Darcie Dennigan’s Madame X (Canarium, 2012)—have arrived to bolster the case for multiplicity.

Lantz’s collection, which pits the disingenuous neologisms of Donald Rumsfeld against the natural philosophy of Pliny the Elder, makes use of contrapuntal personae. Each poem’s vocal and cognitive origin is announced in the epigraph, as this from ” ‘The order that Bees keepe in their worke’ “: “What display of human genius, in a word, shall we compare with the reasoning powers manifested by [bees]?” Pliny’s declaration functions as a wave set off through the poem, an indictment of reckless civilizing impulses (Jamestown, Chichen Itza), perverse spiritualism (“For what festival have you hung these garlands / of skulls? What dance are we expected / to dance below a chandelier containing every / bone in the human body?”), and contemporary ecological hubris—indicated, fittingly, by colony collapse disorder (“they do not return. Their bodies are found / on the grass, miles from the hive, like discarded coins.”). The “order” of the bee’s work, duplicated endlessly in the chambers of the hive, originates from the bee’s perceptual mechanism, its compound eye in hexagonal array.

The human eye, of course, is only notionally visual. It is primarily the source of our reasoning faculty, of which Rumsfeld makes illiberal use. “Too Many, Too Few” begins with Rumsfeld’s paraphrase of the justifications for invading Iraq, stemming from the 2002 National Intelligence Estimate, famously inconclusive on the question of Iraq possessing WMDs: “There’s another way to phrase that and that is that the absence of evidence is not the evidence of absence.” The statement masks the burden of proof with the prejudice of indictment, as though the latter were plausibly of equal or greater weight in comparison to the former. With the speaker convinced by his own disingenuous logic, “Too Many, Too Few” is a meditation on empty choices:

The archipelago’s isles
bunch up
in the distance,
but this is a trick
of perspective:
the straits between
are miles across . . .

That the persona recognizes the illusion of perspective in the natural world and not the fallacy of his own logic represents a poignant moment of loneliness: true alienation in the Modernist tradition, born of self-delusion.

The epigraph to Dennigan’s collection—”I advance pointing to my mask”—is taken from Barthes’s A Lover’s Discourse, and it effectively prepares us for an experiment in persona. The personae concerned here are the novice (the young lover or mother or fledgling politician, who often serves as the default speaker) and Madame X (the world-weary voluptuary). We might be tempted to assume that Dennigan proposes a developmental paradigm, that Madame X will initiate the novice into the ways of cosmopolitan sexuality and a knowing domesticity. Certainly, Dennigan enjoys hinting at such a relationship: the speaker is often described as wearing the dark robes of a novitiate, and the Madame X depicted in the painting by John Singer Sargent wears a black, plunging dress, held up seemingly by willpower. The speakers might best be described as interpenetrable: a porous vulnerability typifies each persona. The characteristics of the novitiate and Madame X threaten to irrupt into one another’s monologues. If the speaker wears a “mask,” no amount of unmasking will reveal a unified original.

This evocative ambiguity appears in the striking early poem, “The Other Forest,” in which an ostensible lecturer at a public library recalls having “donned [her] habit” and “a ton of More Spirit Than Flesh make-up” in preparation for the evening. The topic of the discussion is “l’Armoire Secrète,” and the planned audience—”nuns-only” (ladies’ night?)—becomes instead the speaker’s husband alone. The implied investigation of indoctrination and purity is heightened by conflations of spiritual and physical ecstasy, as “Sex lubricates…the locks on the gates…Paradise-wise.” The postlapsarian admonition “the wilderness spreads woe unto him…who carries the wilderness with him” is made corporeal in the speaker who “parted [her] robes…to show…marching in and out of [her] cunt…the ants.” The speaker embodies “l’Armoire Secrète” in the manner of a novice carrying a reliquary. The profane and the sacred are one and the same, and the persona becomes more clearly a composite entity.

A similar instance of interpenetration is at work in “The Speechmaker,” when Madame X becomes Rep X, a savvy political operative and the speaker’s adversary in a political race. To counter Rep X, the speaker engages in a game of one-upmanship, declaring that the answers to social ills are “Baby jails…Baby jails…Horrific…Why had I…I hadn’t meant…!” The instructive fallout is resolved only through the speaker’s subsequent self-delusional acceptance of the extreme belief to which she has been goaded by Rep X. In other words, Dennigan’s personae must accept their own multiplicity, their own “permeable constructedness” (Lyn Hejinian). Madame X may embody compromise, even life’s pervasive disappointments, but as another speaker notes, “These things are meant to break me but I think—I think they’ll salvage me” (“In the Aviary”).

These experiments in personae are most powerful when the voices irrupt into a shared narrative. One such instance occurs in Lantz’s “Will There Be More Than One ‘Questioner’?” Here, the genuine scientific curiosity of Pliny’s questioning is made temporary prisoner to Rumsfeld’s covert military machinations, in the guise of a CIA interrogation manual:

Here, Lantz evokes the “cell” of Pliny’s beehive, and the voices coincide chillingly. If we can conceive of Lantz’s Pliny and Rumsfeld as voices analogous to waves generated through their respective poems, then the moments in which the voices coincide constitute waves of doubly amplified height.

Dennigan’s personae, on the other hand, are not as strictly delineated as Lantz’s, the result being a sustained coincidence (by “coincidence,” we mean literal simultaneity, minus the overtones of happenstance). In “Catholic school reunion,” alumnae reminisce:

It is not a word for humor girls—

The nun’s explication of orgasm once appealed to the adolescent speaker/novice’s sense of humor—indeed, there are still echoes of that appeal. But this humor is overlaid with the alumnae’s now-ambivalent understandings of sexuality, motherhood, and mortality: the purview of Madame X. The conversation turns to a missing classmate:

I heard he is dead.
I heard—

Actually, tomorrow, I am traveling to Ephesus.
I too would like to imagine sex and have my own Jesus.

The coinciding voices, with their timbres of jadedness and naiveté, make for an especially acerbic recollection.

Coincidence represents a horizontal phenomenon (constructive possibilities among the various personae, a result of the irruptions previously discussed), but these instances of multiplicity also engender a vertical phenomenon; namely, they allow the author to enact the collaborative work of reading an open text (Barthes). Moments of coincidence generate a feedback mechanism: the author is surprised by the uncanny interactions between these distinguishable personae. In effect, the author creates the personae as texts, as “tissue[s] of citations” and “culture.” This constitutive persona recognizes the one within the many. In this way, the author acknowledges the unstable nature of creation, which is enacted both at the moment of coincidence and the subsequent, synonymous moment of reading, when the reader’s experiences, vocabularies, and cultural understandings are brought to bear on the text. The notion of a unified text—while temptingly convenient—is, at last, exploded. Lantz’s Pliny the Elder neatly encapsulates the implausibility of unity in the poem title ” ‘Whether the World be finite, and but one’ ” (emphasis added). Dennigan would agree with unity’s illusoriness, as her speaker wryly relates, “We have the task of becoming whole persons.” In light of the multiplicity of the self, it is more than a lifelong task.

Benjamin Landry is working toward his MFA in poetry at the University of Michigan.  His work has appeared in Conjunctions, Crazyhorse, Salamander, Sonora Review, Sou’wester, and [PANK], and is forthcoming in Denver Quarterly and Drunken Boat.  He won the 2009 Columbia Journal Poetry Contest, and his manuscript Particle and Wave, structured after the periodic table of elements, was a finalist in the 2012 National Poetry Series Open Competition. (9/2012) 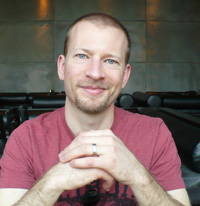 Benjamin Landry is working toward his MFA in poetry at the University of Michigan. His work has appeared in Conjunctions, Crazyhorse, Salamander, Sonora Review, Sou’wester, and [PANK], and is forthcoming in Denver Quarterly and Drunken Boat. He won the 2009 Columbia Journal Poetry Contest, and his manuscript Particle and Wave, structured after the periodic table of elements, was a finalist in the 2012 National Poetry Series Open Competition. (updated 9/2012)