In 2009, agitprop is alive and well. Consider Shepard Fairey’s Obama poster: HOPE, it proclaims, recalling early Soviet posters. Where the Department of Agitation and Propaganda used agitprop to promise food and water and jobs to the Communist faithful, Fairey promises HOPE under the banner of Obama’s face. He conjures an emotionally propagandized realm in which our need for a savior is asked up, made useful.

Crafted with allegory and image, agitprop speaks to poetry. Both rely on these tools to yield a larger picture, a more complex rendering. And for poets like Matthew Gavin Frank, agitprop works, both as a rhetorical strategy and as a gateway to artistic discussion. In today’s pitch-saturated America—a country now inured to terrorist attacks and reductive television news, blogs without fact-checkers, and information tweeted in 140 characters or less—antiestablishment writing unpacks the images and messages trumpeted without nuance to Americans (think mission accomplished) and makes them into art. Poet Baron Wormser, feeling no hope after George W. Bush’s first administration, took to his pen in 2005 to write Carthage, a chapbook starring an unnamed American president befuddled by the swarm of terror he’d created. We need no names: we see W. in every wrinkled brow, in every twanged statement. In Frank’s first collection, the book itself becomes a sort of agitprop spectrum, restaging contemporary America—hyperactive, hungry, bright, and loud—in loaded lines and dense poetic images.

The book’s title gives an initial glimpse into Frank’s world. Sagittarius Agitprop is wild—peopled with family and strangers, the bodily and the celestial. Sagittarius, a recurrent character, appears as a sort of doppelgänger for the speaker, guiding the reader through scenes important to Frank—dusk, a visit to Syracuse, moments of deep slumber. The collection’s politics come slyly, through oblique examinations and sleek, quick mentions. This book is not a banner, but a documentary—it takes in Frank’s world facet by wondrous facet. Only in the collection’s metabolizing do we find agitprop at work.

The poems that most explicitly take up political subjects do so through the lens of the familial and the domestic, giving the issues at stake a familiar face. “Buying a Gun on the Internet, or I’m Mad at My Family” skewers, in one deft swoop, Eastern meditation and American lawmaking. “Kundalini / before coffee,” declares “Aunt Adelaide,” while her son spends his after-work time plugged into a computer. The speaker’s gaze leaves Adelaide and her coffee, moving from the “handle-less mug” and its steaming-hot contents to “steaming Caesar, / Caesar steaming at knifepoint— / all over the world, chests open // to laws that demand revising, sodomy / handgun, the threat // of the draft.” This vulnerable, exposed body—wounded by the government that should keep it safe—presents the reader with the kind of crystallized, hyperbolic image expected of agitprop; however, unlike the two-dimensional posters of the Soviets, we have in “Buying a Gun . . .” the complication of metaphor and the dexterity of Frank’s language to bring the critique to poetic life.

Frank takes the reader deeper into violence in “Ars Poetica.” “A Sitka deer died here yesterday,” the speaker informs, then pulls back to give us a fuller understanding:

the boy who shot the deer
climbed a flagpole in front
of the closed middle school, fell
and broke his arm . . .
I don’t know why he did this,
but I can guess.

Somewhere near the fallen boy, “his mother sneezes / blood into a handkerchief.” The invisibility of any connection resonates through the poem. We can’t know why the boy shot the deer either, but the speaker’s uncertainties—I don’t know, but I can guess; I don’t think I’m supposed to see this—arouses a generalized fear. We don’t know why our buildings fall, why we must fight wars or detonate bombs; but perhaps, with human nature at hand, we can guess.

Thrust into the larger politics of love and loss, Frank spares us no examination, not even the most painful. “[W]ait:” the speaker of “Begging” beseeches over and over as he takes us through the poem’s stanzas, moving from “the daughter, fresh from fields / of tractor” to “a kitchen strewn with her mother’s / dead cats,” from image to haunting image, at a speed set by the poem’s nonce form. In “Saucer,” a father “beyond medication” slides into illness; at its conclusion, we find him in pieces, as “a few hairs from his old beard still cling to the sink.” Two children in “Mirrors” ask the impossible of the pre-storm air: “tell us also, that our parents / will never die.” In these poems, death is negotiated with, hoped against, accepted, and reviled. Even the living natural world takes on this halo of loss. “In the morning,” ends the speaker in “More Trouble on the St. Lawrence,” “when the light is like this, I think of hospitals.” And how do we cope? The same poem offers a possibility: “rock . . . into repetition, swallow your English muffin with strawberry jam.”

Food in this collection romances and seduces, even as it’s devoured; it marks time and observes ritual. Frank, a former restaurant industry worker and author of the food-and-wine memoir_ Barolo_, understands our love of the glorious meal and indulges us magnificently. Here, we read of cherries and chicken, dinner plates and coffee mugs. We have dining’s lows and highs: soup and chili from the can, blood oranges and calf’s tongue. In many poems, the speaker and others collect around the kitchen table. This seemingly traditional examination inverts itself often, making eating a surreal, allegorical act that infuses our everyday lives with flavor, scent, memory. In “The Dressmaker’s Dummy,” the speaker and his wife purchase and display their near-human dummy, who “always / hangs as we twirl our fettuccine, as we // undress and love and argue, as we fork / the meat of all dinners // into our excited mouths.” As body and object blur, so do the senses, as the speaker in “For Linda” “wonder[s] if the milk, spoiling in the fridge, / has a sound.” Frank is not alone in his use of food as multisensory captivation—Soviet artist and poet Vladimir Mayakovsky enticed with the promise of supper in one of his more famous agitprop posters. “You want to eat?” it asked in Russian. “You want to drink? Hurry to enter the shock brigades!”

Rachel Mennies is an instructor and second-year MFA student at the Pennsylvania State University. She has reviewed books for Pleiades, The Mid-American Review, and Rain Taxi, and her poetry is forthcoming in Sycamore Review. She edits reviews for AGNI. (1/2010) 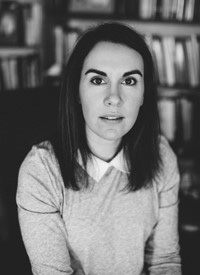 Rachel Mennies is reviews editor of AGNI and has been part of the editorial team since 2009. She is the author of The Naomi Letters (BOA Editions, 2021) and The Glad Hand of God Points Backwards (Texas Tech University Press, 2014), winner of the Walt McDonald First-Book Prize in Poetry. Her poetry has recently appeared in The Believer, Kenyon Review, American Poetry Review, and elsewhere. Mennies serves as the series editor (2016– ) for the Walt McDonald First-Book Prize. Visit her at www.rachelmennies.com. (updated 4/2022)