During schoolyard spats between young boys, conflicts rarely end in punches. There is, instead, a perpetual appeal to those higher up in the food chain—all grade-school boys magically have a big brother who is ready, apparently, to fight someone half their age, or, if necessary, beat up the rival’s hypothetical older brother. Because of an eight-year-old boy’s inability to really hurt anybody, harkening to brothers capable of real violence is a means of confirming one’s own capacity to provoke fear in others.

In Ottilie Mulzet’s beautiful translation of László Krasznahorkai’s Baron Wenckheim’s Homecoming, which won the 2019 National Book Award for Translated Literature, Big Brother is no mechanism of the state but instead the omnipresent Big Brother that eight-year-old boys constantly reference. Brute force is the only higher power in this book, and everyone constantly attempts to either exploit or gain the favor of the richer and more powerful.

Baron Wenckheim’s Homecoming’s primary storyline opens with a character called the Professor—a reclusive scientist and world-leading expert on moss—holed up in self-exile at the edge of a backwoods Hungarian town, a lightly fictionalized version of Krasznahorkai’s hometown, Gyula. As the book opens, the Professor’s estranged daughter appears at his hermitage shack demanding money. Soon after, he is approached by a group of neo-Nazi bikers, who see him as a sort of homegrown freedom fighter, a potential intellectual lodestar and thought-leader. But the Professor’s arrangement with the bikers quickly turns sour, and he is forced into hiding. As the Professor’s mental health deteriorates, it is occasionally unclear whether we’re tuned into his interior dialogue or that of an omniscient and, as the story goes on, increasingly opinionated narrator.

The Professor’s attempts to evade the biker gang serve mostly as (heavily fragmented and plotless) asides to a series of interconnected events revolving around the return of the Baron Béla Wenckheim, a prodigal (65-year-old) son who, after disgracing his distinguished family by gambling away his money in Argentina, has returned to his birthplace in rural Hungary. Assuming that the Baron is still extraordinarily rich, everyone from minor thieves to the city’s mayor plan how to steal his fortune. The biker gang, for its part, turns toward him as another possible intellectual (and financial) patron.

After a number of aesthetic and thematic departures, like The World Goes On and the International Man Booker–winning Seiobo There Below, Baron Wenckheim’s Homecoming feels like the third installment of a spiritual trilogy that begins with Krasznahorkai’s novels Satantango and The Melancholy of Resistance. At a hefty 576 pages, Baron is also his longest book. As in Satantango and The Melancholy of Resistance, characters perpetually wait for an “event” that may or may not happen: in Satantango, it’s the arrival of Irimias, a charismatic young man spearheading the creation of an alternative-living commune. In Melancholy, village-dwellers dread the rumored appearance of a messianic figure who, arriving with a macabre circus, triggers panic throughout the town. Baron Wenckheim’s Homecoming remains faithful to this mode. After the arrival of a mysterious, terrific convoy of all-black vehicles, there’s a feeling that the end is near—terror grips the inhabitants. We could say that the convoy’s arrival is the beginning of the end for the town, or that the Baron’s sudden death is chiefly responsible for hope’s rapid evaporation, but to definitively point to either would be unfaithful to Krasznahorkai’s vision. Baron is devoid of sequential logic; to say that A necessarily begat B is to assume a mode of thinking that the book rejects. It is an essential element of the novel’s tragicomedy that clarity returns immediately before wholesale apocalypse: just when it seems the town might be recovering from general dread-induced anarchy, we realize it’s instead in the eye of a storm. What follows is a final, clear-eyed understanding that life as the town has known it till now will soon end, either in salvation or destruction.

Krasznahorkai is often compared to Beckett because of the pregnant sense of dread that pervades his work, and comparisons between Krasznahorkai and vaguely pan-European male writers of labyrinthine sentences like Roberto Bolaño, W. G. Sebald, and Thomas Bernhard are likewise common. These comparisons rely primarily on the authors’ sentence length, however, and tend to be both insubstantial and cursory in considering other modes of connection. Throw in the Sebald blurb that appears on every Krasznahorkai book I own, and his pigeonholing as one of the European Long-Sentence Men seems all but complete. Nevertheless, other, specifically technical aspects of Baron Wenckheim’s Homecoming do recall these three authors, more than in Krasznahorkai’s other works.

The novel’s structure is comparable to The Savage Detectives. Where the second, longest section of Bolaño’s epic relies on interview-style reportage of secondary characters to trace the wayward paths of Arturo Belano and Ulises Lima, Krasznahorkai uses “conversations” between auxiliary characters to move the story along. Most of the time, the interactions between these characters aren’t really conversations; they’re rants or speeches, and the non-speaker exists solely as a soundboard. A block of what seems to be first-person speech is broken up by asides like, “said the chief editor to the journalists standing in front of him,” after which the first-person reported monologue continues. In one of many examples, “I’m a romantic, I don’t deny it, said Marika to the new employee in the tourist agency” appears in the first line of a paragraph, followed by a pages-long first-person explanation of Marika’s former relationship with the Baron. The “new employee” remains silent.

This said-X-to-Y distancing technique is also present in most of Bernhard’s work and in Sebald’s fourth and final novel Austerlitz. Comparing Baron to Bernhard feels more apt than with prior Krasznahorkai books because of the passages in which both the narrator and the Professor issue tirades against Hungary. Toward the end of the book, the anonymous author of a mysterious letter circulating around town calls the Hungarian soul “dark and empty” and calls the residents of the town “cowardly provincial assholes.” These sections take the form of a letter, but were you to exchange Hungary with Bernhard’s home country of Austria, you could find these anti-national rants in Bernhard’s Gargoyles or Woodcutters.

These constant point-of-view shifts make reading Baron Wenckheim’s Homecoming challenging. To call Krasznahorkai’s work difficult feels both necessary and meaningless—I’m not always sure what critics mean when they call a work difficult, as the word seems to be a catch-all for a number of discrete aesthetic choices made by the author. A work might be hyper-referential, or highly fragmented, or the language itself might be demanding, or essential plot points or key thematic elements might be buried in subtext or implication. Baron Wenckheim’s Homecoming demands intense, prolonged concentration; readers must focus completely or risk being lost in the sea of undulating prose.

After particularly difficult recent works like Seiobo There Below and The World Goes On, though, Baron is one of Krasznahorkai’s more accessible books. Readers can pull together a coherent narrative from loose subplots and extraneous information, and the two primary plot lines, Baron Wenckheim’s and the Professor’s, move forward. Part of the novel’s difficulty is found at the line level—Krasznahorkai’s prose is perpetually in a process of fine-tuning; his narrators constantly grasp for le mot juste in real time.

Readers will find Krasznahorkai’s characteristic gallows humor throughout. A few moments are laugh-out-loud funny—such as when the Professor realizes he has downloaded an app that “causes a man’s voice, every hour, to announce the correct time while weeping,” or when the Neo-Nazi biker gang plays “Don’t Cry for Me, Argentina” when, after much anticipation, the Baron’s train finally arrives. But as a book of ideas, Baron Wenckheim’s Homecoming is remarkably pessimistic about the ways that late capitalism perverts human relationships. There are precious few interactions not explicitly based on unilateral or mutual exploitation.

Much of this exploitation revolves around money. Every time it seems like a character might be acting in good faith, it comes to light that they were instead motivated by financial gain. As one character says to another: “The greatest sin a friend can commit against another is when that friend doesn’t pay up in time, because friendship is a matter of trust. . . .” Sometimes Krasznahorkai stumbles over the details—references to current brands or contemporary technology often feel like Boomer-generation disgruntlement. The one relationship seemingly based on genuine affection—the Baron’s with his childhood love Marika—is an emphatic failure. Despite sitting across from her, he literally cannot recognize her.

Having a basic knowledge of Hungary’s political past and present is useful before diving into the book, but readers of Krasznahorkai in translation should have little trouble identifying Hungary’s version of fascism-lite in their respective countries. Many scenes, like the aforementioned standoff between the Professor and the media, will likely be read by posterity as fictional representations of our current post-industrial West.

Krasznahorkai’s universe runs parallel to ours. It is where Diogenes the Cynic hasn’t been exiled, and his search for One Honest Man has continued until it’s morphed into fascist hero-worship. The book asserts that most fledgling proto-fascists seem ill-equipped to accept that their ideology does not use violence as a means to an end, but as a senseless and brutal end in itself. The narrator writes of the convoy: “[It] was purged of motive, just as it contained no goal;…the manifestation of that horrific strength rendered all extant things null and void. . . .” We never understand exactly how this armed convoy figures into the plot—we only feel its naked terror and utter pointlessness. Just as _Seiobo There Below _builds on itself in the form of the Fibonacci Sequence, calamity in Baron Wenckheim’s Homecoming feeds on itself: there is hysteria because there is hysteria; there is terror because there is terror.

There is a want (or a need, perhaps) in both fiction and in life to place all suffering within a larger narrative. Early calamity is the necessary precondition for a redemptive arc; Saint Augustine saw his morally bankrupt youth as the only possible route to his adult self. It is largely this tendency of retrospectively imbuing tragedy with meaning that the book criticizes. There is no redemptive arc to suffering in Baron Wenckheim’s Homecoming—the suffering exists wholly for its own sake, coherent and pointless.

For readers attached to the principle of Chekhov’s gun, Krasznahorkai’s stubborn rejection of sequential thought might prove frustrating. There are inessential subplots that seem to add little to the novel, and had the book been a hundred pages shorter, I would not have enjoyed it any less. But after successful books like Seiobo There Below, The World Goes On, and The Last Wolf & Herman, Krasznahorkai has returned to the form that made his name—the polyphonic Hungarian pastoral in all of its absurd tragicomedy. What differentiates this one from Satantango and The Melancholy of Resistance is its universal applicability: the Baron could just as well be returning to the outskirts of Ankara, or a village in the state of Rio de Janeiro, or somewhere in small-town USA. If this is indeed Krasznahorkai’s last book, as some have written, what a stunning way to go out. 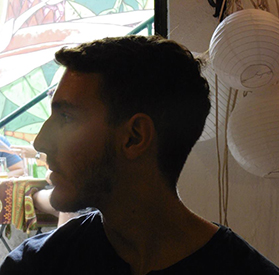 Jeremy Alves da Silva Klemin’s essays and translations have appeared in The New York Times Book Review, Literary Hub, AGNI, The Common, and elsewhere, and his writings about Portuguese-language music in such publications as VICE’s i-D, Highsnobiety, and Bandcamp. A 2018 Fulbright Fellow in Curitiba, Brazil, he has also lived in Portugal and Scotland. He is now an MFA candidate in creative nonfiction at Oregon State University and the editor of Joyland Magazine’s “Consulate” section. (updated 10/2021)