In a recent Prairie Lights interview, Christopher Kondrich comments, “The poems [in Valuing] are an attempt to love, and see this as something that one must undertake daily. Putting love into the world once doesn’t excuse you from putting love into the world the next day, the day after that, and so on.” Kondrich’s second collection, selected by Jericho Brown for The National Poetry Series, immediately poses questions: What does it mean for a poem to love? How might the idea or action of love be conveyed through poetic form?

Kondrich’s readers don’t need to wait long for a reply: “I choose to love the dawn; it speaks / in light,” the collection’s first poem, “Asylum,” begins. In a repeating, circling form that echoes a religious litany, the poem centers on what its speaker chooses to love:

I choose to love this table
where I lie, the instruments that tell me
what I am made of. I am made
of things I love: the onlookers
peering over, trying to find some
what of them, maybe a gem or pencil
they once held.

The perspective of “Asylum” is one of reversal—the speaker is lying on an examination table in what we would consider a passive position, yet the agency of the scene is all theirs. The situation evokes Jean-Paul Sartre’s famous line “Freedom is what you do after what’s been done to you.” The speaker chooses to acknowledge “the instruments that tell me / what I am made of” and to love them and to document that love.

Valuing’s epigraph is borrowed from the twentieth-century philosopher and theologian Simone Weil. Appearing a page-turn before “Asylum,” the epigraph reads:

Everything without exception which is of value in me
comes from somewhere other than myself, not as a gift
but as a loan which must be ceaselessly renewed.

Weil, whose writing mines the intersections of mysticism, physics, and ethics, is a fitting spirit to have preside over the poems in Valuing, which hinge on claims of linguistic logic, and yet, whose conceptual touchstones of mystery and love transcend what we commonly think of as logical or rational. It is the patient on the table in “Asylum” that offers Kondrich’s reader the purest instance of intention and will:

I choose
to value. I choose to love
as asylum from that which presses me
to hate. This body, which is not
a body. This representation, which is all
there is. I have a choice in the matter.
To touch you, I choose my hands.

Who is this I of this poem, and where does their choice and conviction to love come from? It is a question of both content and form. In her new lecture-essay collection Animal (Wave Books, 2019), the poet Dorothea Lasky introduces the critical term “the metaphysical I.” Lasky writes:

The best gift that a poet can give is to allow their I to be its own cool animal. . . . The metaphysical I is not a new idea really, just maybe a new term. I define this I as a wild, lyric I, one that has no center and has no way to predict where it will go. An I that is a shapeshifter. A persona that uses unexpected language and imagery, that is inconsistent, frightening, funny, and beyond the idea of a singular self.

Lasky’s metaphysical I reverberates in the poetry of Kondrich’s Valuing: in the narrative generosity of the collection’s multiplicitous I and its shifting (and seriously playful) grammar, and in Weil’s epigraph and the reminder of the self’s many loans “which must be ceaselessly renewed.” There’s something intrinsically generative (sharing the Latin root genus, with generous) about the metaphysical I too. As Lasky asserts, “I want to not just recreate this world through poetry. I want a never-ending, generative universe that poetry can help create.” In the generous, powerful words of Kondrich’s speaker in “Asylum,” “I choose to value.”

Valuing attends deeply to language play, and in the collection’s poems, signifier and signified are ever-complicated by that which poetry does best: metaphor—a kind of higher-valuing. The reader can imagine a building or a physical place called an “asylum,” but the poem also signals a metaphorical haven, folded into an act of self-preservation (“I choose to love / as asylum”). Part of the beauty and the lure of Kondrich’s poems is the unexpectedness of the language, the strangeness of the attention, the reader’s experience of following a gaze when they do not yet know what they are looking for or why. These are metaphysical poems in the Renaissance sense (think of the linguistic play of John Donne), but also in the Jorie Graham sense, where to attend to an external, physical wind is to attend also to an internal, intellectual wind, a thinking spirit. “To orient the mind one must orient the world,” Kondrich’s poem “Orientation” begins, the speaker discovering in conclusion that “I am only a matter / of time.”

Ekphrastic poetry has seen a renewal of energy and focus in recent years—such as in Diane Seuss’s Still Life with Two Dead Peacocks and a Girl (Graywolf Press, 2018), on which the paint is still wet and glistening. Kondrich’s sequence “Black Paintings” takes its subtitles from three of Francisco Goya’s fourteen “Black Paintings”: Fight with Cudgels, Saturn Devouring His Son, and A Pilgrimage to San Isidro. Goya created these works (now housed in the Museo del Prado) as murals on the walls of his Madrid home—despairing and personal, the paintings were never intended to leave his home. Ekphrastic art collapses the walls of time and distance between art objects, as in the opening lines of Kondrich’s “Fight with Cudgels”:

To collapse means to crumble but also to compress
remnants into the remembrance of a whole
body, this person was. Now it is broken
into its swinging and what it swings.

In the “Black Paintings” sequence and elsewhere, Kondrich’s poetry is metaphysical in the sense that it collapses the grammatical division between the material and the spiritual, extending the invitation of the “you” to a presence beyond the reader or hearer of the poem. In “A Pilgrimage to San Isidro,” the speaker confesses: “You lead me not out of myself, but further in / to where I brought myself with these arms / if you would return them.” The potential for mystery is one of windows created in extant walls—

This mouth could yawn
open, could be a cave for the song that travels
by wind to hollow out the face. But let it, Chris.
You have to let it.

The appearance of the poet’s name near the center of the book sends concentric ripples through Valuing’s other pages. This single address performs a holding-back of biographical presence as well as a stepping-into. The poem, and Goya’s painting by extension, becomes an explicitly subjective art experience through the naming of the poet’s self. “But let it, Chris” underscores the reality that, for poems, there are always multiple I’s at stake. Lasky’s is predominantly a metaphysical I, and Kondrich’s speaker is often a metaphysical I, but in Valuing, there is also the documentary I, the memoiristic I, the confessional I, the prosopopoetic I. There are as many I’s as the poems need there to be.

A grammatical turning—a kind of revolution—is ever-alive in the pronouns of these poems. The speakers turn repeatedly on themselves, on their listeners, readers—on the “you” that may also be the I. The intimacy is distance, and the medium protean. “Never have we worshipped / so many suns,” says the speaker in “Clearing”:

the morning sun
with its golden tassels,

the evening sun
with its mask of moon,

the sun on the sea
of undulating eyes

that refract the giant eye
watching from space.

Remember when the ocean
was forest.

We used the big razor
to reveal a clearing

of water that could worship
for us.

The razing of the forest for an ocean, the origin- and creation-story language of this poem, is part of the delight of answering the question: what should we value/love? (“And where? And how?” follow closely behind.) “Poems know this,” writes Lasky, “that neither time, nor visible color, nor being, falls down a straight path…a poem is special because its logic is emotional and aesthetic and resists the traditional ways logic seeks to jail itself.” Lasky’s criticism is a bright lens for Kondrich’s work: his poems write their way out of the jail of certainty, revealing to readers a clearing—a forest beneath an ocean, something that can answer to the world for us, on our behalf. It is less important that the reader locate or know the “We” of the poem than that the suns and worshiping water open before the reader as imaginative potential, as possibility—that is where the reader might dwell, suggests “Clearing.”

Consider the poem “Porousness,” in which the “we” are coins, the porousness a by-product of living a life of value. The speakers observe: “It is good to make the most of being money. A coin in the palm never leaves / the hand. It takes us into the pockets and purses of others. We see into so few / windows…We can’t see the action people make. We can’t taste their meal.” The coins, vectors of value, are pocketed, their physical actions limited to how people use them: “You try to / spin without the hand to spin you.” But the coins also live their life of value—exist to participate and to be “part of.” Kondrich is particularly deft with scene and setting in his poems, and he leaves us with the poignancy of coins’ lives: “Sun behind the buildings—you don’t glint / anymore. Why don’t we glint in the moonlight? you ask, but the meal is over and / the plates have paintings on them.” Valuing asks us to think about what we value, and how we value it. What do we know of trust? Have we chosen value, chosen “love / as asylum from that which presses [us] / to hate?” Valuing is a collection sensitive to human landscapes and lives, to the many coins in our pockets, and to our persons. Valuing asks that its readers—as ethical, spiritual beings—attend to this world and to our choices, and offers us a gleaming array of scenarios, descriptions, meditations, and fables from which to begin. Let the choice be love, Kondrich’s poems entreat. 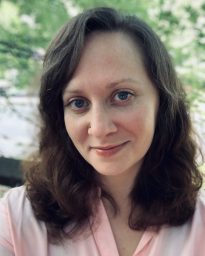 Hannah VanderHart lives and teaches in Durham, North Carolina. She has poetry and reviews published and forthcoming in Kenyon Review, The American Poetry Review, The Adroit Journal, Rhino Poetry, Poetry Northwest, and elsewhere. Her first book, What Pecan Light, is forthcoming from Bull City Press, and she is the reviews editor at EcoTheo Review. For more information, visit hannahvanderhart.com. (updated 2/2020)